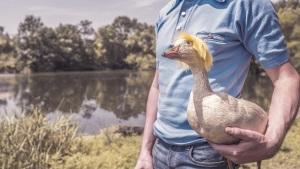 I edged away from my roommate to the far end of the couch, not even trying to be subtle. In my head, I rehearsed how I’d start the conversation with my RA: “So, I need a new roommate. I think Tim might be a serial killer . . .”

“You alright there, Nate?” Tim grinned fiendishly, his teeth beaming through his thick, bristly beard.

I gave an awkward, nervous laugh and stared down at the blood red concoction he was stirring.

I’d talked to Tim on the phone a month earlier. My college had sent me his name and number so we could start getting to know each other before we moved into our dorm as roommates.

Like most freshmen, I was anxiously overanalyzing every word he said. What did he look like? Was he a morning person? Did he like basketball and working out? Did he snore? His voice was level and calm, and it didn’t seem like he had much to say. The conversation only lasted a few minutes. There weren’t any immediate red flags, but that didn’t stop me from worrying as the last few days of summer slipped by.

Soon enough I found myself standing outside the three-story brick building that would be my home for the next nine months. My parents and I hauled the first of many loads up three flights of stairs and passed through a bare common area to my room. The door was open, the light was on, and I heard voices. This was it. I exhaled and stepped into the room, softly saying, “Hi.”

Tim turned around from where he’d been arranging movies at his desk. He was a few inches shorter than me, wore glasses, and had thick dark hair. We shook hands and then started unpacking.

The first few days were hectic and stressful, trying to juggle student orientation events, new class schedules, and homework. I only saw Tim in passing, and still he didn’t say much.

Thursday afternoon I made my way back to the dorm after being in class all day. Tim was already there, earbuds in and eyes glued to his laptop. I dropped my stuff on the bed and then noticed something hanging from the ceiling. It was a grimy rubber chicken, dangling from a paper-clip chain.

“Uh, Tim,” I said. When he didn’t respond, I tried again, almost yelling. “Tim, why’s there a chicken hanging from the ceiling?”

Taking out one earbud, Tim stared at me for a second and said, “That’s Marilyn! Leave her alone!”

He acted like nothing weird had happened, so I did my best to start my reading homework and ignore “Marilyn.”

The next day I was so glad I’d made it through my first week of college that I almost forgot about the whole rubber chicken thing. Tim and I went with a couple of other guys to the dining hall for dinner and then made our way back to our rooms.

We settled down to watch a movie when Tim hopped up and asked if anyone was thirsty. He had a strange gleam in his eyes, so I decided to pass. Disappearing into our room, he came back out with a two-foot-tall empty cheeseball jar and a huge container of Kool-Aid mix. Dumping the mix into the still-yellow cheeseball jug, he raced into the bathroom.

I sat there gawking at the bathroom door as I heard the shower hiss to life. A minute ticked by, and then Tim reappeared hauling the jug to the center of the room. He stared down at the murky shower water as the Kool-Aid mix settled to the bottom. “Oh man, I forgot my giant spoon!” he shouted.

Suddenly, his face split into a smile that had “crazy” written all over it. “Marilyn!”

Again, he vanished into our room and returned with the rubber chicken, paper-clip-chain and all. Dunking the grubby chicken into the shower water, he started stirring, his grin growing and growing as water splashed onto the floor. “You sure you don’t want some?”

Dipping a measuring cup into the red concoction, Tim flopped onto the couch, took a huge sip, and smacked his lips. “OK, now I’m ready for the movie!”

It’s safe to say that after that experience, it took me a few nights before I felt like I could sleep without one eye open. My first impression of Tim as a completely calm, chill guy was definitely not accurate. My second impression of him as a crazy man wasn’t right either. It took me weeks, if not months, to have a decent understanding of who he really was: a generally quiet but fun-loving guy who had never quite grown up from summer camp (he also confessed later that he had looked up online how to creep out your college roommate).

It took me longer still to truly appreciate him, but after being his roommate for three years and still being good friends after college, I’m very grateful I didn’t try to find a new roommate.

A lot of us, I’m sure, have heard how important it is to make a good first impression, which is true. But at the same time, people are complicated. It takes time to see who they really are, why they act the way they do. When we let a few minutes’ worth of interaction dictate how we see someone, we run the risk of falling into stereotyping.

Jesus models for us how to overcome misleading first impressions in his encounter with the woman at the well (John 4:1-42). He looks past all the layers and layers of deep-rooted cultural, gender, and spiritual barriers between them and sees someone needing the Gospel. He reaches out to her, and through her testimony and faith, many people in her town were saved. As disciples, we are called to follow his example.

Whenever we meet a person who is different from us in some way, we have a choice about how we’ll respond. InterVarsity’s Approaching Differences Diagram below shows some of the possibilities. 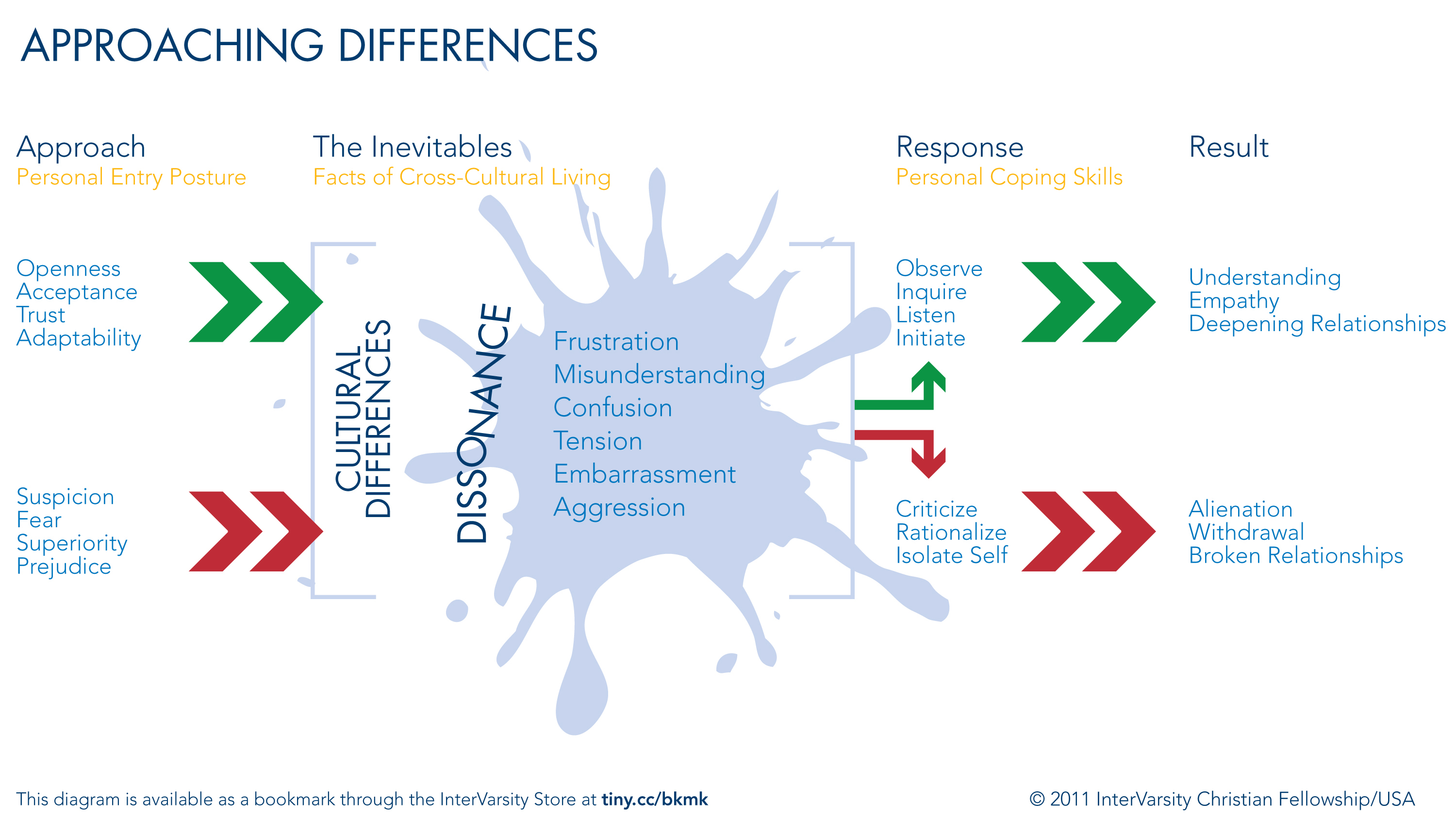 My first few weeks with Tim are a perfect example of “red-lining,” as you can see in the graphic above. When his fun-loving side started to show, I reacted with a liberal dose of suspicion and fear. Not surprisingly, a lot of the inevitables and results started to appear, especially misunderstanding and withdrawal.

But thank God, he allowed me to slowly learn to take a different approach to Tim in all his differences. I came to realize his antics were a good balance to my workaholic, no-nonsense approach to so many things in life. When I was too wrapped up in finishing a paper, he’d just do something totally ridiculous to make me smile. He made life more enjoyable.

As you meet new people, remember Tim. What started out as something awkward and confusing turned out to be the birth of a lifelong friendship and a hidden blessing.

By Steve Tamayo
Reading the Bible with a Diverse Community

Each of us wears cultural lenses. Our culture lenses shape our worldview, our relationships, our behavior … even the way we read the Bible.

By Lisa Rieck
How to Make Friends Without Looking Desperate

We all want and need close friends. But how do we find them?