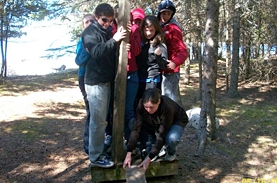 As our eight-person leadership team crammed onto a four-by-four foot wooden platform in the middle of the woods for a team building exercise, I couldn’t help but wonder: How exactly is this going to make us more effective leaders on campus?

I’ve never been a big fan of “team building” exercises. As a task-oriented person, I’ve always found them to be a pesky interruption to whatever the team is supposed to be accomplishing.

So when I heard my chapter’s leadership team was going through a ropes course the first morning of Chapter Focus Week, I was less than enthusiastic. With just five days to plan and prepare for the following year, time at CFW is always short. When I considered our extensive to-do list, the thought of spending two whole hours playing games in the middle of the woods stressed me out.

Before we began our first exercise, our facilitator reminded us, “The goal is not completing the tasks themselves. It’s about building relationships.”

Great, I thought. I’m all for building relationships, but we’ve got work to do!

For our first course, we had to get from one platform to another platform 12 feet away without stepping on the ground, using only two narrow boards of wood. Mistakes were costly. Just one misstep meant starting over, which we ended up doing three times. By that point, I was a little frustrated. Other team members insisted that we keep trying.

And then it was my turn to walk. Suddenly, I lost my confidence. At a mere five inches off the ground, I feared toppling over and causing my team to start over.  As I extended one foot onto the narrow wooden board, I heard shouts of encouragement from one platform of students and an inviting chorus of “You’re almost there!” from the group that awaited me.

With the assistance of a team member’s outstretched arm, I arrived safely at my destination, where I squeezed into the tightly packed group. I grabbed onto the people standing to my left and right, and cheered on our next team member.

From then, I started observing my team members. I noticed that Brittany was an encourager. Erin saw the big picture. Billy offered a new perspective when we were stuck. Johnny knew how to implement directions.

In the end, despite my successful crossover, we still failed the challenge. But we learned some new things about each other.

So what does that have to do with leadership on campus?

A verse from 1 Corinthians has helped inform my understanding of gifts in the body. 1 Corinthians 12:12 says, “Just as a body, though one, has many parts, but all its many parts form one body, so it is with Christ.”

I’m realizing that our leadership team is more than a group of people completing tasks on a to-do list. As a team, we each bring our individual gifts, while affirming gifts in one another. And that doesn’t just make us a team; that makes us the body of Christ.

Even if we do like to play silly games in the woods.

Lauren Anderson is an InterVarsity student at the University of Wisconsin–Madison studying Journalism and Mass Communication.