My Great-Great-Grandmother Was a Cherokee Princess 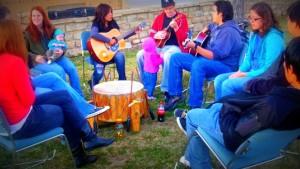 In your family stories, are there hints or mentions of a Native family member? Do you, like me, know clearly your tribal connections—you may even be a tribal member—but have very little history with or knowledge of your tribe or cultural ways? Have you ever felt hesitant to claim your Native roots?

As the co-coordinator of InterVarsity’s Native ministries, I regularly talk with students and staff who grew up disconnected from their Native culture and are unsure if it’s even okay for them to claim that heritage. They feel inadequate and insecure, and have a sense that they ought to know something that no one ever taught them.

As someone who has faced these same challenges, I want to invite and encourage you to take a step forward in learning about your Native heritage, with its unique people and culture.

Claiming Your Place in the Family

Last year at InterVarsity’s national Native student conference, Would Jesus Eat Frybread?, my Native identity was affirmed in a way I'll never forget. A Native Fijian student stood in front of the entire group and asked how we could enfold, include, and embrace people who feel disconnected from their Native heritage—people like me. “I want my great-grandchildren to know that they are Fijian, because I am Fijian,” he proclaimed. “No matter what color they are or where they live. I want them to remember me.”

I was moved to tears. I had always felt that I needed to prove that I was “Native enough.” But this student was declaring to me that being family is enough—that even though I don’t always fit in with culturally Native people, and even though I will spend my life as a cultural learner, I was wanted. I was family.

I’ve heard it said among many different Native cultures, from Hawai‘i to Oklahoma, that when a Native person makes an important decision, they seek to honor the seven generations that came before them, and they seek to bless the seven generations that will come after them. That means your grandparents multiple generations back were thinking of you during their lifetimes. And it means that you and I have a responsibility to honor them in our lifetimes. Claiming their place in your heritage does so in a way that is good and right.

But wait, you say—how can I claim their culture when I know next to nothing about it? Chances are you don’t know your culture because somebody worked very intentionally to separate your ancestors from their land, their language, their religion and cultural practices, and even their families. For many years our government and our churches shared a value: “kill the Indian and save the child.” Many Native people were forced to walk away from their cultural ways in order to survive. Relearning your Native culture honors the sacrifice of your ancestors and heals some of the hurt and evil that was inflicted on them.

The Dos and Don’ts of Claiming Your Native Heritage

So what does it look like to claim that heritage? Let’s start with what you shouldn’t do.

You should probably never say, “My great-great-grandmother was a Cherokee princess.” People who grew up on the reservation often make jokes about statements like this. For one thing, most Native American tribes—and certainly Cherokees—don’t even have princesses. For another thing, it puts distance between you and your cultural heritage. With a statement like that you’re essentially saying, “My grandmother was Native, but I am not.” When you claim your family, claim them all the way. If your grandmother was Cherokee, then you are Cherokee.

I would also encourage you not to include your blood quantum when you identify as Native by saying something like, “I am 1/128 Choctaw.” Let’s think in terms of family, not fractions. Blood quantum is political; the whole idea was fabricated by the U.S. government as a way of keeping descendants of tribal members from receiving what the government owed them. I doubt that you use fractions when you talk about the other parts of your ethnic heritage.

With that said, here are a few ideas for what you can do to move forward in learning about and claiming your Native heritage.

Exploring my Native heritage has led me to embrace values that benefit my family, caused me to wrestle with what it means that I am both oppressor and oppressed, and ignited new passions in me. It has been a rich journey. I am so thankful to be part of an organization that has encouraged and supported me as I’ve learned about the various aspects of my ethnic identity.

Megan Murdock Krischke is a member of the Wyandotte Tribe of Oklahoma and is also of Cherokee and Irish descent. She lives in Durango, Colorado, with her husband Willie, daughter Flannery (4), and son Soren (2.5). She has been working with Native students and staff for over seven years.

Are you a student? Come to our annual Native student conference, Would Jesus Eat Frybread?

Staff, email me to find out what’s happening in the Native staff community.

Find out more about partnering with InterVarsity’s Native ministries.

Thanks for your article.

Thanks for your article. You advised against saying "my great grandmother was Native" and encouraged people to just own that identity for themselves. For most non-Native people, it's pretty common to say "My great grandmother was German" or Korean, or Swedish, or Mexican. As a person whose eight great grandparents are from eight different countries, I describe my background in this way because these are the facts. For me to state those facts does not put distance between me and their respective cultures; time and distance have already done that. For me to claim that I am culturally any one of those ethnicities exclusively is just not accurate. I can't claim to be culturally Sami when I grew up in the U.S. midwest, and carry the genes of seven other great-grandparents. Is it different for those with Native ethnic background, no matter how distant? Is there a sense that the difference is that my ancestors distanced themselves from their native cultures by choice, but Native people had their choice, and to some degree to their ethnic identity, taken from them?

I recently read your article

I recently read your article and found it very helpful. Abput two or three years ago I researched my ancestry and have copies of some ancestors that are registered on the Chapman Roll, Miller application, and Siler Roll. I don't know alot about my heritage, but have been getting information little by little as time goes by. This past September, my husband surprised me for our anniversary with a trip to Gatlinburgh and Cherokee, which excited me to no end. While in Cherokee, we went into a leather store and as I went into the door, the Native owner of the store gently reached for my arm and said, osiyo!. I replied with enthusiasm, osiyo! After that I just broke down into tears because I felt so apart of something big. I have sense subscribed to the Cherokee Phoenix paper and was asked if I was registered Native. I'm not, but am very confused about what and where I need to go on to the next step in my journey. I was wondering if you have any suggestions or help for me? Sincerely, Shelia Foster