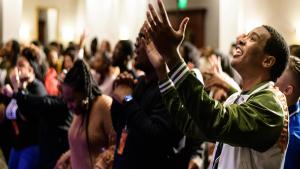 In this season, we’ve experienced many hard things, things that testify to the brokenness of this world and the narrative it operates under.

Our country isn’t a stranger to this narrative. This year, we mourned the deaths of George Floyd, Breonna Taylor, and Ahmaud Arbery, just to name a few. In the past decade, we’ve mourned the deaths of Atatiana Jefferson, Botham Jean, Philando Castille, Freddie Gray, Eric Garner, Michael Brown, and countless others. These Black women and men, who were made in the image of God, deserved to experience life but were instead given death.

Since 2020 began, we’ve seen another thread of this narrative running rampant. The pandemic has taken the lives of millions across the world, regardless of race or ethnicity, and forced people to quarantine at home and live distanced from one another. So far, there have been over 25 million confirmed cases and 840,000 recorded COVID-19 deaths throughout the world. Six million of those confirmed cases and more than 180,000 of those deaths happened in the US. And because of the social isolation associated with this disease and the amplified stressors it places on mental health, thousands more have died.

It feels like the world around us has been swept up in a narrative of life to death. But this is not the narrative of the gospel.

From Death to Life

What we read in John 10:10 is that though the devil might come to steal, kill, and destroy, Jesus has come to bring life—and bring it to the fullest. During his life, he came to preach good news to the poor, freedom for the prisoners, recovery of sight to the blind, and to set the captives free (Lk 4:18). Through Jesus’ death on the cross, he destroyed the power of death and brings life to all who believe. And through the power and authority Jesus has been given over heaven and earth, he sends his followers, empowered by the Spirit, to invite all to listen and respond to this good news. The narrative of Scripture is not one of life to death but of death to life through Christ Jesus.

As followers of Jesus on campus, we have been invited by Jesus to go and share this good news with students and faculty. Despite many of us taking classes at home, we’re still sent to meet new students online and tell them about God’s redemptive plan for all of creation. We’re still sent to plant small groups that give good news to the poor, freedom for the prisoners, recovery of sight to the blind, and set the captives free. We’re still sent to lay down our lives for our sisters and brothers. We’re still sent to proclaim to our campuses that while the narrative of the world around us is one of life to death, the reality of the kingdom of God is one of death to life.

On my campus, we saw Jesus bring life through our first conversion since we planted the chapter there a year ago. During our spring semester at home, Clarissa, an international student leader on campus, felt God leading her to invite her friend and fellow international student, Sarah, to our online large groups. Sarah was hesitant at first, but that didn’t stop Clarissa from inviting her. Eventually, Sarah began showing up at our meetings, but she wasn’t very engaged. It was during her third Bible study, however, that something began to change. She was incredibly excited to study the story of Jesus healing the paralyzed man in Mark 2. At the end of our meeting, we decided to make an invitation to faith, and Sarah said yes! What I love so much about this story is that through Clarissa’s persistent invitations, Sarah, a Black woman, was able to receive life from Jesus.

Jesus has come to bring life, and he invites us, as his followers, to do the same. How is Jesus inviting you to follow him this semester? How is he inviting you to partner with him in bringing life to a world and campus that has been characterized by death?

By Tom Lin
InterVarsity Resolved to Pursue Justice and Reconciliation
As President, I reiterate InterVarsity’s commitment to pray for and act toward a more robust biblical ministry of reconciliation and restoration.
Login