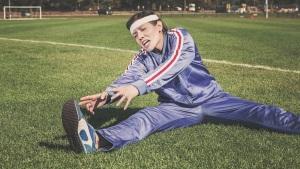 Many of you have probably made resolutions or goals to be more awesome this year. To lose weight and get to the rec center, to read more instead of watching Netflix, to quit smoking or stop biting your nails.

It’s also likely that you’re already starting to hear the mean voice of January Defeat. January Defeat loves to whisper, “It’s January 13 . . . and you haven’t changed any of the things you said you would. You’re a loser and you’ll never change.”

January Defeat will slam you with shame when you order fries instead of a salad, leading you to believe you are fat, ugly, and worthless. And while you’re binging on another series—maybe Orange Is the New Black, Gilmore Girls, or Agents of S.H.I.E.L.D—January Defeat decides to curl up next to you, like a snake seeking to find a warm rock to rest on, and fills your already anxious heart with fear that you’ll never be able to change, that you don’t have the power, that you were in fact defeated before you even began.

January Defeat has nothing good to say and is never, ever your friend. It’s like the Mr. Hyde to the Dr. Jekyll of New Year’s resolutions—hopeful and condemning all at once, luring us in to believe that if we can only control ourselves we’ll find happiness, contentment, and health. In the real tale, Dr. Jekyll concocts a potion to try to prevent Mr. Hyde’s destructive tendencies from continually taking over his mind and body. But in the end, Dr. Jekyll is utterly defeated.

Scripture tells us a far different story than that of Dr. Jekyll and Mr. Hyde—thank God! Instead of the words of January Defeat, the Holy Spirit whispers words of truth and life to us when we’re filled with regret, grief, and self-condemnation. Words like this:

Therefore, there is now no condemnation for those who are in Christ Jesus, because through Christ Jesus the law of the Spirit who gives life has set you free from the law of sin and death. (Romans 8:1-2)

Life through the Spirit where we can experience joy, peace, and purpose.

Often, panic rises inside of us as we start searching for the next best thing to help us become the person we want to be—but what if the best thing is simply to be? Be with Jesus and let his words fill your mind and heart. Instead of writing out a list of what you want to do and who you want to become, ask Jesus: “Lord, how do you want to lead me in becoming the person you created me to be?” You might even want to do this with a group of friends. I find that friends are far more loving and gracious with us than we are with ourselves. Friends remind us of the truth of God as well.

You don’t have to live in January Defeat, and you certainly don’t need to be alone. When I felt the panic rising in me recently for how much I ate and drank over the holidays, I sensed the Lord saying, “Dear one, I love you. Be gentle with yourself. Take a walk. Cook a delicious vegetable soup that you actually enjoy eating. And while you’re at it, why don’t you bake a loaf of crusty whole-grain bread from that lovely cookbook you received at Christmas?”

So today, be thankful. Be gentle. Jesus reminds me in all my hopes and longings that he is victorious over depression, shame, fear, and indifference. And he can lead me out of these things and into the good things he has for me—tomorrow, and for the rest of the year.

Jessica Fick serves as a writer on InterVarsity’s Communications Team. She blogs at jessicafick.com and is working on her first book for InterVarsity Press.