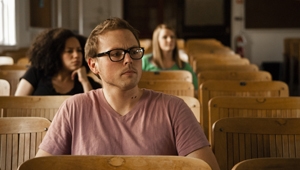 In 7thgrade, I was obsessed with Civil War history. During lunch I would sneak off to the library and read cheesy historical fiction about one of the bloodiest conflicts in American history. Some kids knew a lot about getting girlfriends; I knew a lot about Gettysburg. I never made a game-winning 3-pointer or won anyone’s heart, but I did learn how to love a good story.

So it shouldn’t be too surprising that my favorite part of InterVarsity’s annual Orientation for New Staff (ONS) this year was hearing about the movement’s history.

I loved hearing the story of what God has been doing on campus. In fact, I was humbled by how much had happened before I ever showed up to an InterVarsity meeting.

I am beginning to understand that I am part of a complex history of world changers and prophetic dreamers.  And as I learn to interact with and appreciate this history, I have noticed that there are things from the past that echo true on the campus today.

Like the idea that “we take pimply-faced, introverted, legalistic freshmen and turn them into biblical Christians.”

If you’ve been around InterVarsity much, you know this quote. And when they shared that our first president Stacey Woods had said that, the majority of us new staff responded with an appreciative laugh and a more subtle sense of “yes, that is exactly what we do and I’m glad someone understands.”

But while it’s a fun, pithy quote, I’m struck by how true this idea of carving world changers out of “pimply faced” students is.

I was a pimply-faced, introverted, legalistic freshman.

Or, at least I was the embodiment of this idea.  I didn’t have pimples, extreme introversion, Christian legalism and I wasn’t even a freshman when I got involved in InterVarsity.  My story has different variables, but the thing that matters—the Holy Spirit inspired transformation—is the same.

I showed up to my fellowship as a new Christian. I was a sophomore. I had lots of patchy facial hair, only wore plaid and thought my loud, dramatic ideas were the most important thing anyone would ever hear.  Sometimes, I still act this way.  But by the grace of God, after 3 years as a student and 1 year as an intern staff, I can say that I am transformed into something resembling a biblical Christian.

Now, I don’t lead people to Christ standing in line at Starbucks. I forget to pray for my meals and I think bad thoughts when the San Francisco Giants lose.

But I am willing to give the rest of my life to advance the kingdom of God in the name of Jesus. I am eager to read and be transformed by the Word of God. And I want to see God’s people reconciled and worshiping in multiethnic fellowship.  And God-willing, this will be the pattern of the rest of my life.

I could not have told you those things 4 years ago. I would have told you that “the Dream” was to write a good novel, marry a supermodel literary type, and live in a house with lots of trees in the front yard. And if I could play first  base for the Giants, that was great too.

Some of those things still sound nice. But more than that, I want to see a world where the peace and justice of God is pervasive and impactful. And I want to invite others to be a part of it.

I dream these kinds of dreams because I had staff workers and a community that were willing to love me through the transformation. “Pimply-faced freshmen” are not developed into world changers in one Bible study.

Want to know a secret?

I think Stacey Woods was a pimply faced, introverted legalistic freshman too.  In fact, that’s probably why it still gives us goose bumps to hear that quote 50 years later. Because that’s all of us. No one is so special that they just “get” what it means to be a biblical Christian. There are no born world-changers.  We all have our “pimples” or “legalism” or whatever you want to call it.

That’s how Stacey Woods and I are the same. We were transformed by Jesus, in large part because there were people who were farther along the road that were willing to invest in us. Eat food with us. Listen to us cry about girls and family and complain about how we thought the world was ending even though it was not.

People who understood that God changes the world through pimply faced, legalistic freshmen and in that process, transforms them into world-changers. Biblical Christians.

I don’t know exactly how God is going to restore and reconcile all peoples and things to himself. But I know I am part of good story. I know that it’s better than any 3-pointer I could have made, book about Gettysburg I could have read, or girl I could have made blush with a silly poem. It lasts. And if I’m faithful and share what Jesus has shown me with my students, it will continue for generations or until he returns.

Hi IV! I'm a recent graduate and an active member/leader of my IV chapter for the four years in college. I love this post, and it does give me goose bumps to reflect upon the rich history of the great men and women that came before us. We do that in our chapter too: we like to pass down stories to the new students about how our chapter became the way it is today. That said, the use of the word 'introverted' in this post really bothered me. (Or rather, distracted me from fulling appreciating the post.) Being an introvert myself, it is difficult for me when introverted is used alongside pimple-faced and legalistic, indicating that introversion is indeed an undesired quality that needs to be rooted out before one can be turned into a biblical Christian. This is simply not true. IVP even published 'Introverts in the Church.' It is my experience that my IV chapter takes a very extroverted approach to Christian community and evangelism, and introverts often feel like sub-par members of our chapter because they do not jump on every opportunity to stand around proxe stations in order to talk to strangers. (I don't have anything against proxe stations, and I have learned a great deal by participating in these activities.) My point is that in order to live out the spirit behind seeing 'God’s people reconciled and worshiping in multiethnic fellowship,' there is something to be said about not making a group of already alienated people in IV feel further excluded from the movement. I know that this post does not capture everything that was said at ONS, and the author must leave the wording in an exact quote from the speaker. I have also had multiple conversations with my campus staff workers (one introvert, one extrovert) about how introverts could better thrive in the church, so I know that IV is not 'anti-introversion.' But just as IV has taught me about any kind of [your favorite]-isms, the hurtful things are often the subtle messages that are sent based on word choice and value judgement. I was a pimply-faced, introverted, legalistic freshman. I am a not-as-pimply-faced, still-introverted, not-as-legalistic alum. I want to see God's Kingdom revealed on Earth. I am joining God's mission. And I am doing that as an introvert.

"I had lots of patchy facial

"I had lots of patchy facial hair, only wore plaid and thought my loud, dramatic ideas were the most important thing anyone would ever hear"... (wait, do i know this guy? check photo. nope.) Thanks for sharing, and making me laugh. Here's to lives transformed, campuses renewed, world-changers developed!

Geoff, I really appreciate how in the process of describing the transformation God has brought into your life, you were completely honest and true to who you are as a person--quirks and all. I got a sense of your character as well as an inkling of your artistic passions. One of the hardest things for some of us to do as Christians is to believe that we can have Christ-centered identities and adopting these new identities is not an abandonment of who we are but rather a renewal and redemption of who we were made to be. Reading about a fellow staff worker who loves to write and who loves the Kingdom, encouraged me with the truth that in Jesus is the fullness of who we are. Thanks for sharing.

What a great reminder that

What a great reminder that great stories do not come from a great Earthly storyteller, but THE storyteller. As you commit your life in this way on staff with IV you are blessed with such a great perspective in our narrative. Thank you for everything.

Thank you for normalizing the

Thank you for normalizing the hope to change he world for so many people. I was very young when I started to volunteer and have the hope to make the world a better place. It has always been my hope to change the world in a positive way. I try to do something each day to make a difference in the lives of people around me. I think young people need to see and hear that they are normal and yes it is alright to have great ideas to impact the world. It is even better not to just have those ideas but a plan to be actively involved in the world around you to make positive changes or even to be a positive example. Peace http://eworldchanger.blogspot.com/