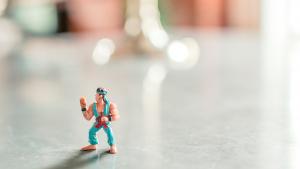 Bulging biceps. Watermelon-sized shoulders. Abs so defined you could see them from outer space.

No, I’m not describing myself. Well, I guess I sort of am. I’m trying to describe the image in my head of the “ideal me.” I can’t tell you exactly when this image popped into my head, but I have a hunch about how it got there. It came from watching Batman effortlessly cream bad guys with his tree-trunk-sized arms. It came from reality TV shows where the super buff guy always ends up with the girl. It came from being overweight in middle and high school and all the negative attention that entails.

While I’m not saying watching TV is a sin, many shows and movies, plus my real-life experiences, hammered into me the unspoken message that real men are measured by the size of their muscles. And though it seems almost taboo for guys to talk about having a warped self-image, I’m guessing I’m not the only one.

This idea has driven me to some pretty drastic measures: doing an obnoxious number of sit-ups, practically living at the gym, shelling out way too much money on supplements, and refusing to quit doing certain exercises even after suffering several serious injuries from doing them, to name a few of the ridiculous things I’ve tried.

And have I achieved my “ideal me”? Nope. Sometimes it feels like it’s hanging just beyond my reach. Other times it seems so far away that I think I’d have more success trying to hitchhike to Antarctica. After all this, I’ve slowly come to realize there’s no diet, no workout routine that can miraculously fix my skewed self-image. Only God can.

For years, I prayed sporadically for a healthier self-image. I was visualizing an instantaneous fix. Instead, I got tendonitis. It became so bad, and I ignored it for so long, that even doing laundry hurt. My elbows, wrists, and fingers were an aching, burning mess. For weeks, I sulked at home. I complained to a friend, “I’m sitting here watching my muscles shrivel up.” And even after I started physical therapy and graduated to lifting “baby weights” back in the gym, it still took months to fully recover.

While I hope I never have to go through that again (praise the Lord for physical therapy!), God used it powerfully. In the past, when he’d try to get my attention about this, I’d distract myself by switching to another diet or workout. Tendonitis took away those options, forcing me to face a reality I couldn’t lift my way out of.

In Psalm 139:14, David says, “I praise you because I am fearfully and wonderfully made.” My heart refused to truly believe that. Maybe it was true for him, but David didn’t have my body. God used my tendonitis to help me see that this was a lie. I am fearfully and wonderfully made regardless of how I look. Our self-worth doesn’t depend on our self-image.

Telling Yourself the Truth

Have you ever had moments when head knowledge just doesn’t seem to line up with what’s in your heart? If you said yes, then we both have something in common with the father in Mark 9:24 asking Jesus to heal his son. He says, “I do believe; help me overcome my unbelief!”

This passage always baffles me. For someone asking Jesus for a favor, it’s not exactly the greatest first impression. But through sharing some of my struggles with others, I think I understand that man a little better. We all have doubts—those thoughts that discourage us and convince us we can never overcome our struggles. But just because we think or feel something doesn’t mean it’s true. Sometimes we have to tell ourselves the truth even when we don’t feel like it’s true. This father was likely desperate, discouraged, hopeless. He’d seen his son suffer so much that I’m sure it was hard to believe anyone could help him. In saying “I believe,” he was speaking the truth, even when he didn’t feel like it.

While I was still recovering from my tendonitis and feeling pretty discouraged, I happened to run into one of InterVarsity’s chaplains. She encouraged me to start reading this prayer aloud each day. At first, I didn’t want to. I wasn’t sure what the point was and didn’t feel like it. But I did anyway. Slowly, I started to understand that the act of speaking the truth is powerful. It allows those words to take root, to sink in deep, instead of being brushed off and forgotten.

In many ways, everything I’ve done to look like my “ideal me” has been too extreme and borderline obsessive. Even so, God has proven himself to be the Great Redeemer.

With all the time I’ve spent in the gym, the Lord has shown me it’s a mission field like anywhere else. Each workout is an opportunity to represent Christ. Sometimes that can feel like a huge responsibility I’m not qualified for, but he’s still willing to use me, imperfect as I am. With my history of being overweight as a kid, God has also used this passion of mine to help me adopt a much healthier lifestyle.

But ultimately, I’m still a work in progress, and not just when it comes to self-image. When I fall back into old ways of thinking, when I don’t feel like God sees me as worthy whether I’m “ripped” or not, his Word is still true. Paul promises us that “he who began a good work in you will carry it on to completion until the day of Christ Jesus” (Philippians 1:6). If you find yourself, like me, having wrestled with something for many years, start reading this verse aloud, especially when you don’t feel like it. Make it a daily habit. Reflect on where you’ve been in the past and how you’ve grown. Ask God to provide opportunities so that you can see how he’s shaping you to look more like Christ.

Thank you for sharing your heart.

By Casey Beckley
Two Truths and a Lie About Your Body

We unintentionally believe a lot of lies about our bodies. The lies fall to both extremes: on the one hand, that the human body is an object of worship, and on the other, that it’s a pointless vessel.

By Erica
How God Helps Us Love Ourselves

Just last semester, I was leading a Bible study with some friends who don’t follow Jesus, and one of them texted me out of the blue asking, “Erica, can God help me love myself more?”

“The problem is, I can’t tell what’s real anymore, and what’s made up,” explains Peeta in the third book of the popular Hunger Games series.