Relentless Acts: Is Your Activism Sexy? 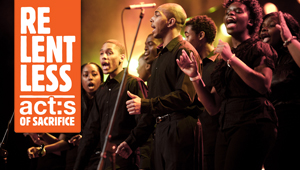 “He also who had received the one talent came forward, saying, ‘Master, I knew you to be a hard man, reaping where you did not sow, and gathering where you scattered no seed, so I was afraid, and I went and hid your talent in the ground. Here you have what is yours.’ But his master answered him, ‘You wicked and slothful servant! You knew that I reap where I have not sown and gather where I scattered no seed? Then you ought to have invested my money with the bankers, and at my coming I should have received what was my own with interest.” –Matthew 25: 24-27

I am the servant with one talent. This is why: I am tempted to think I have nothing.

When I was young, I wished I sang and looked like Whitney Houston or Mariah Carey. I wished I had poise on stage like Gladys Knight or that I was Sister Earl, who (with a voice like honey squeezed from a rock) can tell you her whole testimony with one note! I wished and wished, and as I wished, ambition would rise up only to be quickly replaced with fear. So in my wishing, I kept silent.

It was on a bus in the middle of the night when I understood the root of this fear. I was a sophomore at the University of Texas at Austin, recently thrust into the limelight of two organizations that were mainstays in the Black community on campus. I was coming back from Atlanta, Georgia, on a bus full of people who knew God. They were singing and praying, praising and worshipping. I was sitting in front, thinking of all the reasons why I couldn’t lead these organizations on campus: I couldn’t sing because I had stage fright; I couldn’t be president because I didn’t have the skill set, and so on. I was sure I would fail.

But something strange happened as I listed my lack of talent to God. The spirit of the songs from the back of the bus crept up to me, and God spoke to me clearly, saying, “Who are you to say what you can and cannot do when I am your God? You don’t believe in who I am. That is the issue.”

After that moment and by the grace of God, I did the impossible and became the servant with two talents. I started to take risks by leading on campus, particularly through music and ministry in the Black community, which had at its heart a desire for justice and dignity.

Now I work for InterVarsity in Chicago, ministering with a multiethnic group of students at an art school downtown. It is a place that breeds self-ambition and a shallow kind of justice wrapped in humanism (My students call this “sexy activism”). The call to students is not to have drive-by activism that shoddily puts band-aids on the deep tears of the world, but to give all they have so that they and others will be made whole. However, moving beyond “sexy activism” to giving everything requires moving beyond the hope of a patched-up world to the hope of a whole, abundant world. Deep down, we deem that world an impossibility. So, like the man with one talent we hold on to what we have, afraid that we might lose in the end.

“Do in Remembrance of Me.”

This past Martin Luther King, Jr. Day, I attended a luncheon. Most MLK Day speeches talk about how we haven’t achieved “the dream” and what we must do now. This speech was no different. It was meant to stir up a passion and a thirst that led to action. For me it didn’t. The week before, I had many failed attempts to  help others. On one such occasion I’d tried to help a homeless woman and failed because I lacked the understanding and resources for her particular situation. I’d tried to reach out to people to comfort them and found that I couldn’t find the right words to say. I’d had multiple opportunities to give my energy and my money and found myself willing, but emotionally and financially bankrupt. In the midst of the speech, as I recounted the week before, I felt limited. Any ambition that rose up was squelched by fear, and helplessness.

Then we took communion.

I was sitting there sobbing, walking down the aisle sobbing, eating and drinking and sobbing, singing and sobbing. It was embarrassing, but exciting too! I remembered Jesus’ sacrifice given for me. I remembered what I had as a result. I realized the desire and ability of God to save. And I was no longer helpless or afraid.

I am now the servant with five talents.

During Lent this year, InterVarsity and World Vision ACT:S are taking a look at ways we can practice sacrifice as we follow Jesus. This week, reflect on how you can sacrifice what you do for God’s purposes in the world. As you exercise faith with your talents, you will see God multiply them and use you for change. Then your faith will increase and your talents with it, by the measure of God’s grace.

LeAnn Jenkins is on staff with InterVarsity at Columbia College Chicago. As an artist, her focus is in film production and music. She desires to lead other artists in bringing wholeness, beauty, and dignity to their communities and disciplines.

Wow, I loved your definition

Wow, I loved your definition of Sexy Activism. How true is that, the bandaids as opposed to wholeness in God, complete redemption of society. I have been reading this amazing book called the OLD TESTAMENT TEMPLATE (I know, it sounds horrible, but its revolutionary) which totally h is focused on how society, especially the most poor areas (like the majority of Africa) are so very ineffectively changed by Christianity because of this very thing- we practice sexy activism, and havn't taught Jesus is its fullness- the way where He changes hearts and societies. Anyway, I thought this was cool. Thanks for sharing! elisa (twitter) @AverageAdvocate