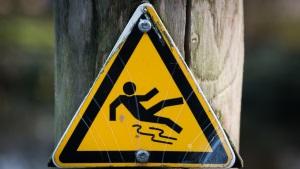 Was I being overly cautious? Yes. Was I missing out on a lot of cool experiences? Probably. Was I crazy to turn down a trip to Disney? Hmmmm. Tough one.

I wish I could say that the hardest choice I’ve had to make was whether I should accept a free vacation. But God has a knack for standing at the boundaries of our comfort zones and presenting us with invitations to leave what we know and enter into something new—something that’s probably scary but potentially very rewarding. It could be applying for a new job, moving to another country, starting a new relationship—whatever it is, it’s only a matter of time before you’re faced with an opportunity. Your response will determine whether you end up stuck in a comfortable but dissatisfying rut or blessed to see God’s hand at work in unexpected, powerful ways.

Opportunity and a Performance Mentality

What often holds us back from stepping into God-given opportunities is a performance mentality. All you have to do is turn on the TV to see what I mean. One channel features contestants pouring their hearts out in one form or another for a panel of judges who can choose to end their dreams in a heartbeat. Another show has a kid burying his report card in the backyard so his parents won’t ground him for eternity for getting straight Fs. Still another channel has sportscasters rehashing the same old argument about who’s the G.O.A.T. (Greatest Of All Time) in the NBA with no clear end in sight.

No matter where we go or what we do, it’s hard not to feel like we’re being judged, graded, or scored. So it’s not surprising that, when we’re presented with a new opportunity, we often turn it down and stick to what we know, or we take the chance only to quit soon after.

While it seems like today’s culture has taken this performance mentality to another level, it’s not really something new. When God presented Moses with the opportunity to free hundreds of thousands of Israelite slaves, Moses said, “Pardon your servant, Lord. I have never been eloquent, neither in the past nor since you have spoken to your servant. I am slow of speech and tongue” (Exodus 4:10).

Moses initially turns down this chance of a lifetime (actually one that had been building for more than 400 years) because he’s afraid of not doing it well enough, of getting a poor grade in his delivery of the Israelite nation. Like us, he’s thinking about who will be watching him do this and what they will think about him.

Nowhere in these verses does God say he’s going to grade Moses on how effective he is at swaying a crowd or how well he develops his arguments. There’s no panel of judges or tryouts. God gives Moses an opportunity and says, “Go. I’ll be with you.”

That should have been enough for Moses, and it should be enough for us, too, if we sense God clearly presenting us with an opportunity. It’s extremely freeing to think that he’s not obsessed with how perfectly we accomplish his mission but just that we step out in obedience, trusting him to do the rest.

The Danger of Looking Too Far Ahead

Another problem we often experience with new opportunities can be seen in the The Empire Strikes Back (oh, no—my inner nerd is showing!) when the wise, ancient, yet eccentric Yoda explains Luke Skywalker’s biggest flaw: “All his life has he looked away to the future, to the horizon. Never his mind on where he was.”

Basically, what the little green dude is saying is that there is a danger in focusing too much on the distant future. It can make us blind to the present and what we are called to accomplish right now.

Similarly, if we pass up a golden, God-given opportunity because we are too fixated on what could happen 20 years from now, that’s a problem. Thinking about the future certainly has value, but it should never hold us back from accepting God’s call.

The psalmist says, “Your word is a lamp for my feet, a light on my path” (Psalm 119:105). It’s interesting he uses a lamp as the metaphor instead of a bonfire or the sun. Lamps are excellent in lighting their immediate surroundings, but they only go so far. We need to focus more on being obedient with the opportunities God gives us today rather than trying to foresee how one choice might impact our lives decades later.

When God gives us an opportunity that appears more like a risk and something to be avoided in our minds, Ephesians 2:10 is a huge source of encouragement. Paul writes, “For we are God’s handiwork, created in Christ Jesus to do good works, which God prepared in advance for us to do.”

When you find yourself given the prospect of a new job, a new ministry, a new whatever, remember that this could be an opportunity for you to do those good works and that this could be something God has been preparing you for. He’s not going to throw you more than you can handle when you rely upon his strength and direction.

Think about Moses again. Although freeing the Israelites was a monumental task, God had been preparing him for this basically since he was born. Moses had grown up in Pharaoh’s house and was an expert in Egyptian culture with a place of authority, which would help him later when it came to talking with Pharaoh. His time living in a foreign land as a shepherd likely prepared him as well as he learned how to live in a lot harsher environment than an Egyptian palace. Stepping up to lead Israel was definitely going to be a bigger challenge than Moses had ever faced, but it’s not like he had never encountered anything difficult before or wasn’t equipped to handle it thanks to God’s preparation and presence.

Most importantly of all, God himself promised to help Moses, and when we study his Word, we see he promises to do the same for us.

I experienced this firsthand with one of the biggest decisions in my life. God gave me the opportunity to transition from my career in teaching to join InterVarsity. Even though I’ve grown a little more daring since turning down a free trip to Disney, the proposition was still terrifying. It meant leaving family, friends, home, four-and-a-half years of college, and two years in the classroom for a completely new job and city. Even though life still isn’t perfect, I look back on where I was a year ago, and all I can say is, “Praise God!” In so many ways, I’ve seen his hands at work, meeting my needs and drawing me into an even deeper walk with him. I’m so grateful he gave me the courage to embrace his opportunity.

So when you’re faced with something new and unexpected, don’t be like me when I was little. Don’t just run away. Seek God’s direction first. Don’t think God will grade you on how flawlessly you handle this new opportunity. Don’t get too focused on the future that you talk yourself out of being obedient. Instead, consider how God might have been preparing you for this all along.

By Sandi Asker
Ripping Off the Roof: The Risks of Following Jesus

One of my favorite stories about Jesus happens in a packed house (maybe because I love packing out my house with friends!).

Through memorable stories and examples, Sam Van Eman shows you how life's disruptions can catalyze (rather than derail) your spiritual growth.