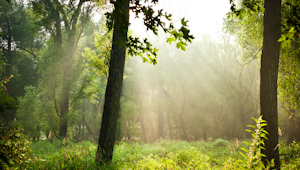 The morning’s sky was partly cloudy above the mountain trail.  Sunshine slanted between the dark clouds, creating ponds of light among the leafy elms. From the shadows I approached one of those ponds as if about to walk on water, my footsteps expectant but also perhaps a little tentative.

Halfway across this illumination it came to me, as C.S. Lewis would say, as a surprise. I saw the glisten of water drops clinging to the corrugated surfaces of the leaves, the pink sparkle of quartz embedded in the granite boulders, and the shimmering, greenish glow of mist suspended between the trees like an aurora borealis. I lingered in the light, waiting, watching, when suddenly I glimpsed above the canopy of leaves an owl with outstretched wings, gliding down like the Spirit of God. I gazed up at the owl, astonished, and was surprised by joy.

The sunlight shifted, and my surprise faded away. So I walked on, still joyful though, but now made reverent by the mystery of my wading into this sacred place; and with backward glances, I reentered the world of shadows like a pilgrim reluctantly leaving a cathedral.

Every day we enter ponds of spiritual illumination where the sacred and the ordinary intersect. But such intersections, hiding within their ordinariness the possibilities for epiphany, are seldom recognized. We pass through them unawares, our minds engrossed by the ordinary things of this world.

In ancient Greek mythologies, these sacred intersections—called theophanies—are said to hold the visible, self disclosure of a deity to a human, such a disclosure being distinctively different from an incarnation—the embodiment of divinity in typically a human form.

In the Old Testament, theophanies visibly manifest the presence of God, such as in the burning bush on Mount Sinai; but in the New Testament, theophanies ceased after the ascension of Jesus Christ, for God has chosen since Pentecost to manifest his presence in this world through the Holy Spirit’s indwelling of his people, which on earth is where his presence now resides —in the church.

Today we should not refer to our “God sightings” as theophanies, for the Bible gives us no indication that our Creator manifests his presence among us through visible objects, such as rainbows or beautiful sunsets—all of which are surely signs of God’s love, but are not, as some Eastern theologies and popular New Age philosophies would claim, literally God.

But theophany-like experiences still occur often enough among Christians to occasion phrases (such as, “God showed up”) to describe those intersections of the sacred and the ordinary, where the Almighty seems particularly present to us.

Then we, like Moses, observe the sacred in the ordinary because we are prepared. 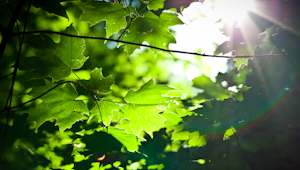 To experience the sacred within the ordinary, we need to be prepared through prayer, expectancy, and our familiarity with the ways of God; otherwise, we may walk through such intersections without seeing what is there.

Our preparation begins with three important disciplines. Preparation for observing the sacred in the ordinary begins with prayer. In the morning we can greet God in prayer and ask for his Spirit’s illumination of our path. And through the day we can talk with God about the people and ordinary events we encounter.

Preparation requires humble expectancy—the attentive expectation that God will provide us opportunities to experience his presence. Such expectancy evidences our faith in God’s care.

And preparation requires being familiar with God’s ways. As we saturate our minds with stories from the Bible, we see paradigms for how God speaks to people and communities. Once we see these paradigms in Scripture, we can then observe them in our own lives.

As we learn to observe where the sacred and the ordinary intersect, we may awaken to clearer understandings of God’s presence in our lives and experience more frequently the surprise of an extraordinary joy.

Jonathan Rice is the Senior Editor of InterVarsity's Communications team.

Thank you for expressing in

Thank you for expressing in such an eloquent way what is in my heart almost every day. I wake praying for God to light the path for me and asking Him to help me recognize His presence in the ordinary experiences of my life. I thank God for those moments of illumination when I feel certain that the desires of my heart are in tune with His plans for me and for those moments when I encounter His presence in unexpected ways.