Selfless or Self-Centered? What Kind of Servant Are You? | InterVarsity
Skip to main content

Selfless or Self-Centered? What Kind of Servant Are You? 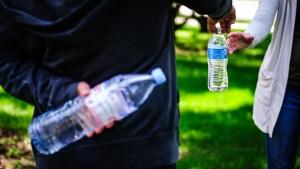 The Bible uses a number of rich words to describe our relationship to God—for example, disciple, follower, child, creature—but perhaps none is as pervasive throughout the entirety of the Old and New Testaments as the word servant. Depending on your translation, this word is used at least 500 (possibly up to 1,000) times in an English Bible.

Interestingly, in our society, serving or service is also quite a fashionable personal value. Describing yourself as a “servant leader” will certainly score you a few points in an interview or cover letter. Many colleges require applicants and attendees to complete a certain amount of “service” hours in order to gain entrance or maintain scholarships. And everyone knows that a “service trip” or even a “service year” looks pretty good on a résumé. There is perhaps no way to climb the proverbial ladder faster than to serve your way there.

Are these the kinds of activities Jesus was getting at when he insisted that greatness is achieved by becoming a servant? How do we know if we are serving for our own benefit or truly serving as Jesus commanded?

If you scan through the Bible’s vast array of stories, proverbs, and instructions regarding servanthood, there are three questions that distinguish the real thing from a false co-opting of servanthood.

True servants recognize that they are under the authority of the Master. Think of Mary’s response to Gabriel upon hearing that she would become pregnant with the Messiah: “I am the Lord’s servant. . . . May your word to me be fulfilled” (Luke 1:38). A true servant lives to obey the commands of the Master. As the centurion tells Jesus, “I say to my servant, ‘Do this,’ and he does it” (Matthew 8:9).

False servants desire to take authority for themselves. When they enter into a situation to “serve,” they need to be the person making the decisions. A false servant lives to exercise power toward their own benefit while masking this as service to others. False servants do not heed the voice of the Master and are not ultimately interested in his commands being fulfilled. They are instead seduced by the power and position that can be found in vulnerable situations, like the unmerciful servant in Matthew 18 who receives mercy from the Master only to withhold it from one of his fellow servants.

2. Who can fix the problem?

True servants recognize that they are under the provision of the Master. In the book of Daniel, the Babylonian king, King Nebuchadnezzar, issues a decree that all must worship a golden statue that he has crafted. If you attended Sunday school as a kid, you probably know the story. Three men from Israel—Shadrach, Meshach, and Abednego—refuse to comply and are thrown in a fiery furnace where they are rescued by God, causing even pagan Nebuchadnezzar to respond in spontaneous worship: “Praise be to the God of Shadrach, Meshach and Abednego, who has sent his angel and rescued his servants! They trusted in him and defied the king’s command and were willing to give up their lives rather than serve or worship any god except their own God” (Daniel 3:28). A true servant knows and lives in light of the reality that only God has power to bring healing and salvation to the world. They serve from a posture of gratitude for the generosity and favor of Jesus that spills over into concern for the world Jesus loves.

False servants desire to create the illusion of omnipotence. Like Simon the Sorcerer in Acts 8 who attempts to buy the power of the Holy Spirit so that he can give it to whomever he chooses, they want to take matters into their own hands. False servants long to be seen as fixers and to tell the stories of heroic sacrifices they have made to “save” the people they have served. At best, they provide surface-level solutions to deeply rooted problems; at worst, they steal dignity from image-bearers of God and fail to point to the true power that comes from dependence on the Master’s provision.

True servants work to elevate the name of the Master. When the Corinthian church began to experience division over which teacher they most esteemed, Paul reminded them, “What, after all, is Apollos? And what is Paul? Only servants, through whom you came to believe—as the Lord has assigned to each his task” (1 Corinthians 3:5). A true servant embodies the work of their Master in an effort to exalt the Master’s name and not their own. They represent the Master and go about his business with no regard for their own fame and reputation.

False servants desire to build their own kingdoms. In the story of the Tower of Babel from Genesis 11, humanity, speaking one language, bands together to build a city with a tower that reaches to the heavens, desiring to, in their words, “make a name for ourselves” (Genesis 11:4). This is the temptation of false servants today as well. False servants work so that they will gain the social capital that comes with service. They are primarily motivated by the same desire to “make a name” for themselves.

The truth is that these temptations toward false servanthood are present in each of us to varying degrees every day. Our lives as servants of Jesus are constant battles against our own egos and desires for power and reputation. But, we press on because the reward is worth it. And what is the reward for a true servant, if not fame or power?

Jesus tells us through the words of the Master in the parable of the talents (bags of gold) in Matthew 25. Upon returning from a long journey to find two of his three servants having obeyed his commands, the Master responds to each of the two faithful ones, “Well done, good and faithful servant! You have been faithful with a few things; I will put you in charge of many things. Come and share your master’s happiness!” The reward for true servanthood in the household of God is a front-row seat for the Master’s ultimate plan to restore all of creation under his lordship.

True servants get to see the Master at work firsthand. Like the servant of Elisha whose eyes are opened to the power of God (2 Kings 6) and the servants at the wedding of Cana who are the first to realize that Jesus has turned water into wine (John 2), true servants are rewarded with the joy of knowing that they serve a Master who is powerful and who is constantly at work in the world around them.

By Scott Bessenecker
Blessed Are the Meek

In the movie Django Unchained, a freed slave named Django is employed by a bounty hunter.

Culture Care
We all have a responsibility to care for culture. Artist Makoto Fujimura issues a call to cultural stewardship, in which we feed our culture's soul with beauty, creativity, and generosity.
Login