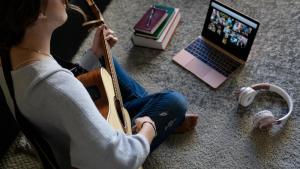 Buzz! Buzz! Of all my experiences being a campus minister at Cornell University, I’ll never forget that moment in March of 2020 when I was in the student cafeteria, and everyone’s phone started vibrating. The email we’d all been dreading had come: the coronavirus had arrived, the campus was closing, and our lives were about to change forever.

As students began calling parents to pick them up, I gathered my student leadership team together to rally and pray, asking, “God, what’s your word for us in this season? How will we live with you as our King rather than fear? What do you want to see happen in our meetings?”

We felt an invitation to step into the unknown and experiment and learn, to be a community committed to each other even when separated. Divided by distance, we would still be united by our Uniter.

But questions remained. Would this vision become a reality? Could an online community be as good as in person? Would people want to come anyway?

A few weeks later, I sat down for a video call with my large group coordinators. One of the first questions we tackled was how long our meetings would be. Ordinarily, our in-person large groups would go for about two hours. Through experimenting, we found it was better to aim for one hour to avoid Zoom fatigue.

The next thing we focused on was making our large groups interactive. We couldn’t just have people staring at their screens for an hour. So we determined we’d rotate various activities from one large group to the next, bringing variety and a fresh sense of energy each time. We often used breakout rooms, allowing members, both new and returning, to catch up and pray for each other. We even did a speed round of two people per breakout room at the beginning to help members greet each other. This was particularly helpful with icebreakers and for newcomers. After all, who wants to have a bunch of strangers staring at you? We used Google’s Docs and Jamboards as well as Padlet (Miro works well too) to collect thoughts, impressions, and answers to group questions.

Taking a cue from talk shows, we “interviewed” different chapter members from week to week to hear their stories and how they were doing. And from time to time, we invited guest speakers to share. When it came to worship, we not only recorded our members leading but also utilized songs from InterVarsity LIVE!, which fit perfectly for Zoom large groups.

After setting up the large group structure, we focused on what roles were needed to run this smoothly. At first, it seemed like one person could do it. But we quickly learned how cumbersome it was trying to set up breakout rooms as you’re telling people what to do and as you’re typing in the chat. So we set up three roles:

After we planned all these steps, we assigned a person to post the announcements and Zoom links for the fellowship. We were nervous, asking ourselves: How will people respond? How will God show up? How long will we be doing this?

Over the next few weeks, God continued bringing our community together through online large groups. It wasn’t always perfect, but we kept our learning posture to help our chapter follow the Father, not fear, to be together, not torn apart, and to do so in the name of Jesus!

As you think through preparing your online large groups, here’s a checklist to help you get started:

By Sarah LaLond
4 Tips for Navigating Conversations about Current Events

With sheltering in place and so many world-altering events happening right now, intense, loaded conversations are becoming increasingly common. Yet doing anything else may sound better than talking about something so potentially divisive (any Enneagram 7s or 9s here?). But how will these issues ever be resolved if they aren’t first acknowledged?

By Kelly Aalseth
Why Do Evangelism in a Time of Crisis?

We need to remind ourselves that we do evangelism in a time of crisis not to fill some “good-Christian quota” but because it’s good for our souls.