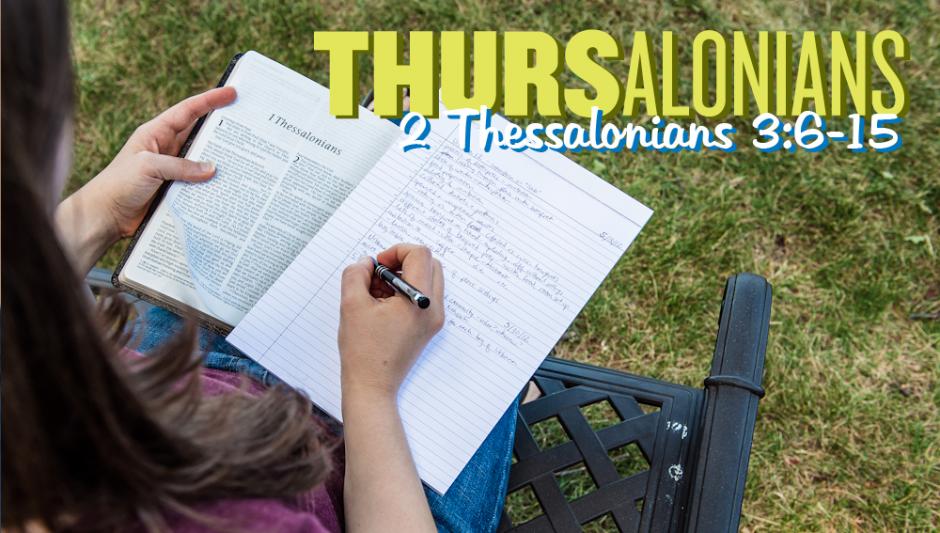 When you write a letter to someone, what is the last thing you say?

Sometimes, we save the most important pieces of information for last: the best thing that has been going on lately, that ‘big news’, or the most critical thing that you want your reader to remember.

As Paul concludes his letter, I found it interesting that he ends with—drum roll, please—an exhortation.

And more specifically, an exhortation against idleness: we need to earn what we have, we need to do good works, and we need to live out the teachings of the Word.

As I read Paul’s exhortation, I realize that Paul is modeling something that I need to grow in—tough love.

And Paul doesn’t seem too afraid of it. In this passage, he gives two ‘tough love’ warnings: to keep away from brothers who are idle and to not associate with brothers who are not doing what they should be doing.

Think about the impact that this would have on someone within Christian community—they would probably get the message that something was wrong.

Paul also teaches "not regard [this person] as an enemy, but warn him as a brother". To clarify, the Thessalonians were not to start giving people the silent treatment, but rather confront them and talk to them.

What if we had the guts to challenge each other like this?

Sometimes, we need to push each other in order to grow in our discipleship. To sit down with someone and choose to have ‘the talk’ about how they have not been fulfilling their call or commitments…it’s not easy to do.

I usually end up avoiding the topic and move on as if nothing has happened. But, who does that benefit?

We are all disciples, let's act that way.

In the purest form, disciples followed their rabbi as if they were attached to an invisible three-foot leash. They tried to learn everything they could from their teacher. And their primary study material was their teacher's life (their thoughts, words, actions, and wisdom).

It should be the same for us and our campuses.

The leaders and the non-leaders of our InterVarsity chapters should seek to live lives that are ‘three steps behind Jesus’ and also learn how to live by example—the way that Jesus taught us. Everyone that we meet is affected by our lives whether we realize it or not. We are indeed teaching others what it means to follow Jesus by the way we live.

This might be why Paul saved his warning against idleness for last.

Ryan Sutton is a student from the InterVarsity chapter at the Illinois Institute of Technology, where he's in his fifth year of architecture studies. He has served in many roles for the ministry including president and now spends his time discipling and developing the younger members and leaders. He is also a part of the Phi Kappa Sigma Fraternity and heavily involved with establishing the Greek ministry. He blogs at studiosutton.wordpress.com