The Subversive Humility of Jesus | InterVarsity
Skip to main content

The Subversive Humility of Jesus 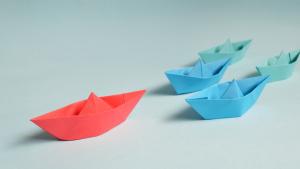 It’s hard to stand out these days.

We live in a competitive world where yesterday’s records are today’s baselines, where the Internet—social media, in particular—puts the American dream on steroids, and where, for many, anonymity is worse than failure. We’re pressured to do more, be different, and make a name for ourselves.

Jesus in his final hours offers us an example of humility that stands in stark contrast. John 13 recounts part of the story known as the Last Supper. Here are five lessons we can draw from this passage.

1. Humble leaders are concerned about others first.

Verse 1 sets the scene: Even in the midst of trials, knowing that “the hour had come for him to leave this world,” Jesus didn’t waver from his commitments. He didn’t shut down and become self-focused. He didn’t dominate conversations with his problems. Instead, he stayed the course and “loved [his disciples] to the end.”

2. Humble leaders are secure in their identity.

“Jesus knew that the Father had put all things under his power. . . so he got up from the meal . . . and began to wash his disciples’ feet” (vv. 3-4). Jesus didn’t downplay who he is; there was no false humility. He acknowledged that he was their Lord and Teacher. He was confident that “he had come from God and was returning to God.” And because of this—not in spite of it—he performed the humble act of washing their feet.

Jesus often broke social norms, and this passage offers a prime example. Peter’s reaction shows how unacceptable it was for a rabbi to wash his disciples’ feet (vv. 6-8). But Jesus demonstrated that, unlike the Pharisees who craved honor and applause, no task was beneath him in advancing the kingdom of God.

Another way he went the distance was in loving his enemies. Jesus knew of Judas’ treachery, yet he washed his betrayer’s feet also (vv. 10-11).

Addressing Peter’s objections, Jesus told him: “You do not realize now what I am doing, but later you will understand” (v. 7). He wasn’t driven by immediate results. He didn’t do good works to be recognized. In contrast to our validation-seeking, fail-fast culture, Jesus invested toward eternity and sought approval from God alone. Even when his followers lacked vision, he embraced the thankless job and led humbly.

5. Humble leaders set an example for others.

“Now that I, your Lord and Teacher, have washed your feet, you also should wash one another’s feet,” Jesus instructed the disciples (v. 14). This is a difficult command to obey, one that perhaps would feel impossible had Jesus not demonstrated it himself. The challenge, of course, isn’t the physical process of foot-washing. It’s the social implications of the act. It’s the emotional wrestling with pride. Jesus’ followers lived in a hierarchical society that dictated the expected conduct for each class of people. To break such social norms by humbling oneself, as Jesus did, was degrading and shameful in their eyes. And not only was the individual ridiculed, his or her family was guilty by association.

In case his disciples still had reservations, Jesus added: “no servant is greater than his master” (v. 16). His humility freed them to be humble as well.

As we witness from Jesus’ example, humility isn’t weakness or self-degradation. Nor is it tact and image management. Rather, true humility is a confident expression of priorities that values our neighbors as ourselves. It contradicts social expectations; it goes against human nature. It’s rare and it’s remarkable. If we are to stand out, let us first be known as imitators of Christ—exhibiting humility that goes the distance and inspires others to do likewise.

Christopher K. Lee, MPH, frequently speaks at local colleges and writes about the intersection of faith, work, and identity at PurposeRedeemed. He is an InterVarsity alumnus and healthcare consultant.