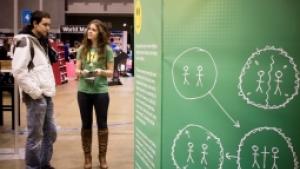 The first time I was asked to share the gospel at a Proxe Station, I tried to get out of it.

I was an InterVarsity alumna attending Urbana 2012 to serve students, so I should have been open to whatever God was calling me to do.

And I was—when that task involved carrying boxes, sorting papers, and transporting speakers. But when my assigned posts were overstaffed, I got passed on to Proxe Stations. Suddenly, my cheerful, ready-to-help attitude flew out the window.

You want me to share the gospel with strangers? I love Jesus and everything, but I'm no campus staff. I'm a lawyer! And an introvert.

What is a Proxe Station anyway?

I got some answers from the Urbana Proxe Station training:  Proxe Stations, I learned, are a new-ish InterVarsity evangelism tool. They are eye-catching exhibits, with big panels and bold graphics, meant to pique the interest of a student walking across campus. Proxe Stations pair interesting art with fun activities—like posting a money sticker on what you'd buy with $25—and a series of thoughtful questions, which Proxe Guides use to engage passers-by. At each stage, Guides asks if participants want to continue. If yes, the questions ultimately lead the conversation to spiritual matters, an explanation of the gospel, and an invitation to accept Jesus as savior.

It seemed easy enough when the trainer did it. But leading Proxe Stations is his job; I wasn't sure it was for me. Aren't scripted questions forced? Will people stop in the middle of a busy day? Would people really want to talk about God?

It was my sister who came to the rescue: nine years younger and active in her Stanford InterVarsity chapter.

"Proxe stations are cool!" she countered, when I voiced my hesitation. "When we first used them at Stanford, we were skeptical, too. We criticized the script, we spent two hours debating whether the font and graphics would appeal to Stanford students. Then the Proxe Station trainer challenged us to stop talking about Proxe Stations and try them. He told us, 'You'll feel awkward the first time, but by the third time, it will be easy.' So we tried it. Suddenly, we started having amazing conversations about God at Stanford! People loved talking with us!"

If my little sister could engage Stanford students, surely I could have some conversations about God at Urbana.

That first day, when I began calling out to people browsing in the bookstore to stop and try the Proxe Station, I was still nervous. But by the third time guiding someone through a conversation about spiritual matters, I indeed found a rhythm.

More importantly, I realized that people are hungry for deep conversation. Most interactions with new people remain stuck in a small-talk loop. We crave real connection, but we don't know how to get there. Proxe Stations provide a natural transition—they serve as a Proxe for the awkwardness and fumbling around that typically accompanies an attempt to move a conversation toward spiritual things. In fact, it's the participant who asks to hear about Jesus!

The Gospel, God's Justice, and NYC

I took this confidence back to New York City, where I helped test new Proxe Stations centered on human trafficking for the Price of Life: New York City, InterVarsity's upcoming justice and evangelism campaign. Sure, people had stopped to talk about God at a missions conference—but what about busy students in New York City?

We were surprised to see that busy New Yorkers not only stopped—but the ones who stopped hadn't done so to be polite. They wanted to carry on a conversation; they wanted to talk about God. In fact, we often had more people wanting to participate than we had Proxe Guides. Sometimes students even waited in line to go through the Proxe Station!

That's why I'm so excited that InterVarsity is inviting alumni and students to join Price of Life in New York City this October. From October 1-12, students across NYC will reach out to their campus, build partnerships to fight injustice, and use the topic of human trafficking as a platform to share the gospel.

But with people standing in line to get a turn to hear about Jesus, these students need our help! Alumni are invited to spread across New York City during the Price of Life (which conveniently concludes Columbus Day weekend!), serving alongside students to reach the campus and the city.

If the only thing standing between 800,000 New York City students and Jesus is enough people to share the good news, I don't want to miss out. And you shouldn't either!

Sign up to learn more about opportunities for InterVarsity alumni to volunteer at Price of Life. If you're an NYC student and want to volunteer, click here.

See you in New York City; I'll be the woman cheerfully engaging strangers in conversations about God.

Jeanie Rose Field is an InterVarsity alumna from Stanford University and is currently serving as the Assistant Coordinator for Price of Life: New York City.