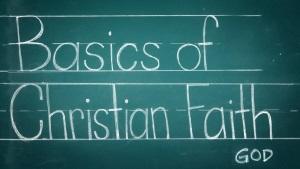 We can learn much about the nature of God by studying the scientific laws of the universe, the history of humanity—particularly the history of the Jewish people—the person of Jesus Christ, and the Bible, both Old and New Testaments. Though the Bible contains neither the word Trinity nor explicit teachings about God as triune, we can nevertheless gather from the Scriptures sufficient references to believe that God is both singular and plural. (See, for instance, Deuteronomy 6:4, where the writer declares, “Hear O Israel: the LORD our God is one LORD,” and Genesis 1:26, where the Creator says, “Let us make humankind in our image.”)

The doctrine that Jesus is both divine and human was affirmed by the ancient church at the Council of Nicaea in A.D. 325. At that time, Arius (a priest from Alexandria, Egypt) claimed that before the world began, the Son of God was created by God the Father. At first glance, Arius’s assertion seems reasonable, but implicit in his conclusion is Jesus’ lack of full divinity and his complete subordination to the Father. Arius’s teaching about the Son of God led to disturbing questions in the church about the nature of Jesus and the meaning of his death on the cross.

(While the Bible demonstrates that during his earthly ministry Jesus was voluntarily submissive to the Father, the Scriptures also show that Jesus expressed authority to forgive sins. Jesus’ divine authority is an important Christian belief in regards to the crucifixion, for if Jesus Christ is not fully God, his death on the cross is merely a gesture of love, rather than a cosmic act of forgiveness in which God makes atonement for this world’s sin. See 1 Peter 2:24.)

The Council rejected Arius’s derogatory claims about Jesus and insisted that Christ shares with God all of the divine attributes. Furthermore, the Council said that Jesus is the same in essence as the Father and is therefore the very God who has always existed, thus expressing a paradox which remains to this day rationally incomprehensible—namely, that Jesus is both fully divine and fully human.

In addition to affirming that Jesus Christ is of one, eternal essence with the Father, the Council of Nicaea concluded that the triune God is not a hierarchy, wherein the Father created the Son and the Son created the Spirit, and each divine person therefore has a subordinate relation to a prior god. Instead, each person of the Trinity is fully divine and equal in every respect, so no one member of the Trinity should be considered first or foremost.

The Church has resolved other controversies about the Trinity. In the second century, the Church declared untrue the idea that the Trinity is merely three different images—or descriptions—of the one God. Such a notion, called modalism, is similar to an actor wearing different masks on stage to depict the various traits of one character. Biblical Christianity asserts that God doesn’t merely portray different characteristics by wearing “masks,” but that God is in fact one Deity who is simultaneously three unique persons. Modalism essentially reduces the genuine existence of each member of the Trinity to a mere symbol, a nonentity, where Jesus Christ and the Holy Spirit don’t truly exist as God; they are merely images of God, having no distinct existence and personality in themselves.

Judged equally erroneous by the Church is a notion called tritheism, a theological concept, stating that each of three different gods shares an attribute, such as omniscience or love, as their unifying quality. While this doctrine does emphasize the uniqueness of the three persons of God, it destroys the distinction of God’s oneness, thus propagating a belief in polytheism and the view that the universe is governed by a divine committee, rather than by one sovereign Being. Moreover, since the unity these distinct gods have among themselves is more like an affinity among persons who share a similar character trait than it is of individuals who share the same DNA, their unity, as in many human relationships, is unfortunately conditional, fragile, and ultimately untrustworthy.

For generations, biblical Christians have believed that God is a Trinity. But the doctrine of the Trinity is more than an assertion that God is triune. The doctrine also declares that the Father, the Son, and the Holy Spirit are each present in the salvation of God’s people and the building of God’s kingdom. Jesus affirms as much when he teaches his disciples to “make disciples of all nations, baptizing them in the name of the Father and of the Son and of the Holy Spirit” (Matthew 28:19).

To this day the doctrine of the Trinity is a core belief among most Christians, for it reveals the nature of God, particularly the divinity of Jesus Christ, and shows us the significance of Jesus’ death and resurrection. Confirming that Jesus is Savior and Lord, this doctrine gives us hope.

Jonathan Rice is an editor with InterVarsity.

Check out these resources on the Trinity:

Delighting in the Trinity: An Introduction to the Christian Faith

Life in the Trinity: An Introduction to Theology with the Help of the Church Fathers