The Vault in Your Soul | InterVarsity
Skip to main content

The Vault in Your Soul 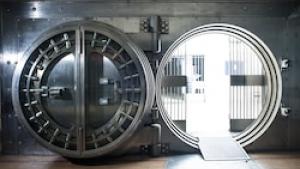 On the short list of things people usually associate with my home state of Kentucky—horse racing, bourbon, an obsession with college basketball—one of the most prominent is Fort Knox.

Popular culture really knows just one thing about Fort Knox: there’s gold in there. Which isn’t just an urban legend—there really are, literally, tons and tons of it. We’re talking gold bars to the tune of $6 billion, give or take. Gleaming bricks stacked as tall as a sasquatch, a Wall Street fever dream come true. The kind of lucre that Scrooge McDuck might fill a swimming pool with.

For that reason, the vault in Fort Knox is one of the most secure places on earth. It’s the kind of place where a robbery would take the Ocean’s Eleven crew a lifetime to plan, and minutes for the guards to comprehensively thwart it. Mission Impossible: Fort Knox wouldn’t even be a full movie; it would be a 22-second short film where someone asks Tom Cruise if he wants to try to break in, he says, “No, that’s actually impossible,” and then the credits roll.

Yet here’s some interesting trivia: if you ever take a selfie next to Fort Knox, the fort is actually the second most heavily defended thing in the photo.

The most heavily defended thing is you. You are also a vault. And inside you is something worth infinitely more than gold.

In Peter’s first epistle, written to beleaguered and suffering Christians, the apostle offers this encouragement:

…through faith [you] are shielded by God’s power until the coming of the salvation that is ready to be revealed in the last time. In all this you greatly rejoice, though now for a little while you may have had to suffer grief in all kinds of trials. These have come so that the proven genuineness of your faith—of greater worth than gold, which perishes even though refined by fire—may result in praise, glory and honor when Jesus Christ is revealed. (1 Peter 1:5–7)

We often feel nothing like Fort Knox when we’re suffering. Pain and hardship can take so many forms, can seem to besiege us from every direction. When the full moon of suffering shines, it feels like the werewolves are everywhere: battering at the walls of our life and prowling through the shadowed halls of our minds. We feel vulnerable, exposed, completely at risk of being overtaken. Not at all secure. Not at all like a vault.

And yet, despite it all, God promises that you are. In suffering and pain, Peter says you are being protected by God’s power, through faith.

His arms are like legion upon legion of armed guards. His hands, like impenetrable, indestructible walls. His grip, like an unbreakable lock. All for you. Why?

Because your faith is unfathomably precious to God.  And he wants it to be as strong as possible.

Faith is what brings you into relationship with the living God. And by faith, through this relationship, Jesus restores you, makes you whole, and secures your everlasting life. Isn’t that amazing? Peter says that your faith is so valuable to God that it’s worth more than gold. He loves you so dearly, cherishes you so completely, that he rallies every ounce of his cosmic might to shield and strengthen the one thing that anchors you close to him.

Trials and struggles in this life are indeed real. They hound us, threaten to overwhelm us, and sometimes succeed in wounding us for a season of life—maybe even our whole lives. Yet, mysteriously, God allows them in order to reveal and strengthen the genuineness of our faith.

Though you may feel like a piñata, you are still a vault. God promises this so that you remember it when you need it most. You are protected by his power in the midst of every trial that rages against your soul, so that you will know his strength is your strength and so that your faith might grow purer and stronger—all to the delight of the one who treasures it, and you, so deeply.

If you have recently chosen to give your life to Jesus and begin following him, welcome to God’s family!