What Growing Up in Saudi Arabia Taught Me About Muslims 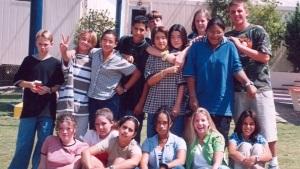 I was in sixth grade and living in Saudi Arabia when terrorists bombed the Al Khobar Tower there. I felt the blast shake the neighborhood where I was babysitting at the time. When the smoke cleared from the building, where many kids from my elementary school lived, 19 Americans were dead, and nearly 500 people from many countries were injured.

I am now living in the U.S., and expecting a baby in just a few weeks. Over the last few months I’ve watched terrorist attacks unfold in Beirut, Lebanon, in downtown Paris, and in San Bernardino, California. But here’s why I, as a pregnant, pale-skinned, freckled, blue-eyed, American woman who speaks with a Southern accent, am not afraid of Muslims, either for myself or for my husband and our child.

Growing up in Saudi Arabia allowed me the unique opportunity to become friends with people from Arab countries around the Middle East and Muslim students from around the world. My friends, my school mates, were just like me in a lot of ways. We swam on the same swim team, played basketball on the compound courts, ate dinners at each other’s houses, and spent the night with each other’s families. Like me (and like every kid around the world), my friends fought with their siblings, argued with their parents about rules, and tried to bend rules.

Yes, some Arabs were bullies—just like some American kids are. And some Muslims didn’t like me—just like some Christian students didn’t like me. But I discovered that my Muslim and Arab friends shared a lot of the same hopes and dreams I did and that, on a basic human level, they were more similar to me than they were different.

I’m also not afraid because Muslims and Arabs are each as diverse a group as European Americans and Christians. The terrorist shooting of nine African Americans at Emanuel African Methodist Episcopal Church in Charleston, South Carolina, was a travesty, and yet none of my Arab friends have asked me why all White people hate Black people. And even though I share the same skin color as the killer, Dylann Roof, I have not been banned from any AME churches. In fact, I was welcomed at a prayer meeting at the AME Church of Athens.

But I’ve heard people say that all Muslims and all Arabs are inherently against Americans. How can this be the case? When I think back to my classmates, I see unique individuals—people who, like me, were shaped by their culture but not defined by it. And their culture was neither inherently violent nor bad. Our similarities made us friends, but our differences made our classrooms interesting, lively, and more fun.

Finally, I’m not afraid because I believe the lessons I learned in my classrooms and church in Saudi Arabia. I learned about the U.S.’s Bill of Rights, which gives every person the right to practice and believe whatever faith or religion they want. As my parents took our family around the world and showed us amazing cultures, they also always told us how great it was to be in a country that had freedom of religion. That freedom—the right to practice and believe your own faith—still gives me hope that America will welcome people from all cultures and religions.

Even more, in church I learned about the importance of forgiveness and how that is the defining mark of our faith. I learned that God calls us to love others, regardless of their race, ethnicity, country of origin, or faith. I saw my parents model this, both abroad and back in the U.S. So I am not afraid of terrorists, because I believe that loving one another radically is not only the hallmark of our faith but also the road to shalom.

So, as a campus minister at the University of Georgia, I will continue to love all students, regardless of race, ethnicity, and country of origin, both here and wherever else Jesus sends me. And my husband and I will teach our child the dignity and value of every life, no matter their background or ethnicity. We are choosing to live in love instead of fear.