What I Learned from InterVarsity 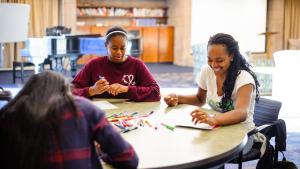 Like many Southern families, my family was in church at least once a week. I attended a Christian camp during the summers. While my upbringing provided me an opportunity to know God, I did not fully know him until I joined a small group during my freshman year of InterVarsity.

It was in that small group that Jen, our leader, taught me to read Scripture in a way that the story came alive. Weekly, she would gather Meghan, Jane, Liz, and me together to look through the Bible. That semester gave me the foundation to know God. Through Scripture, I learned about God’s character. It was the stories of how he kept his promises that taught me I could rely on God.

The following semester, I joined a sorority. My sorority president, Courtney, invited me to join the Kappa Bible study. Because I had learned to read Scripture, I was able to meet Jesus. Stories of Jesus’ compassion invited me to experience his compassionate love and to model the same.

The gift of learning how to read Scripture has given me the anchor I needed to keep following God, even in the hardest situations. It was manuscript Bible study, which I learned and practiced as a student, that anchored my faith in God’s truth so that I could grow as a disciple.

As a young Christian, I struggled with what following God meant. Did I have to give up my fake ID? What did Christian dating mean? How did I walk the line of being in the world but not of the world? I had a thousand questions. And while my community of faith gave me many different opinions, it was my ability to interpret Scripture and evaluate other interpretations that helped me to learn how to follow Jesus.

In my campus culture, binge drinking was rampant. My freshman fall, a visiting friend and I got caught drinking in a dorm. As I debriefed that with my small group, asking what the rules around drinking were and how we would still hang out with friends, I got confusing advice. Everything from, “You can’t drink at all” to “Alcohol is fine; don’t worry about it.”

When I tried to follow my friend’s advice, I swung between trying to earn my own righteousness with rigid rules and living in grace by ignoring the “rules.” But because InterVarsity taught me how to read the Bible, I learned how to anchor my sanctification in Scripture so that I could both grow in Christlike character and live in the knowledge that it was God’s grace that was my salvation.

As I’ve continued to grow, Scripture has molded me. It’s been through the Old Testament that I’ve learned how to love my neighbor. When I struggle with honoring the Lord with my decisions, it’s been Scripture that has shown me that even when I mess up, God’s love is consistent.

As God has continued to sanctify me, Scripture has anchored me in both truth and grace.

I graduated at the beginning of the recession in 2007. It seemed as if a cloud hung over my graduating class because many of my college friends could not find jobs. As the world seemed to be falling apart, my ability to read and anchor my faith in Scripture allowed me to have hope.

Over the past four years, it has been my ability to interpret Scripture that has helped me to follow God in speaking up against injustice. Scripture has anchored my advocacy both in the pursuit of God’s kingdom and in love.

And it is that anchor that has given me hope. During the #metoo movement, my own experiences with sexual assault and sexual harassment threatened to incapacitate me. Words of prominent Christian leaders cut deep, leaving me feeling hopeless. Turning to Revelation and remembering that the kingdom of God was coming allowed me to have hope.

Despite the crazy world around me, the ability to read and interpret Scripture has allowed me to anchor my faith in the coming of the kingdom of God, giving me hope.

The hardest part of graduating was leaving my InterVarsity community. As I waded into a world of churches on every corner, I realized that not every church provided the same level of healthy community.

While I was church hopping, my ability to read and interpret Scripture allowed me to find a community that both was healthy and helped me grow as a disciple. One of the churches I visited had terrific programs for young adults. But after sitting through both a Bible study and a sermon that took Scripture out of context to make a point, I realized that that was not the church for me.

I also visited a church whose young adult programs were not quite as slick, but whose preaching was tied to Scripture. Because my faith was anchored in Scripture, I was able to look past the window dressing and chose a church that helped me grow as a disciple.

Being a member of InterVarsity changed the trajectory of my life. But the gift of being able to read and interpret Scripture and apply it to my life has allowed me to continue to grow as a disciple of Christ.

How InterVarsity Changed My Life

During my senior year at Harvey Mudd College, I felt God calling me to connect with other Christians regularly and be a part of a community. I decided to check out InterVarsity again, and it changed my life.