What Kind of Savior Is This? | InterVarsity
Skip to main content

What Kind of Savior Is This? 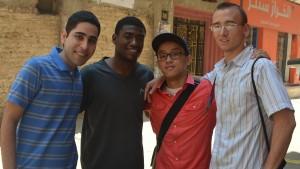 What happens when we follow God’s heart right into the midst of the urban poor?

In walked Pi Bu with a bloodstain the size of a salad plate on his pant leg. I could smell that his pants were soaked in urine. He scowled at us. Refused to undress. Didn’t want to shower.

Pi Bu is a middle-aged Thai man with terminal pancreatic cancer, no bowel control, and some sort of dementia that is progressively robbing him of his awareness. Every evening some of us living here in Khlong Toei wash him, dress him, and clean the unexplained, gaping wounds on his legs.

Both the sheep and the goats are shocked. Neither group knows when they saw the King in such a state and acted, or failed to act. The narrative climax comes when the King explains that when they either did or did not do any of these things for the “least of these,” they did it, or failed to do it, for the King himself.

It was not until later that I connected the passage to that night, washing Pi Bu. In fact, I did not actually do much of the washing myself. But I did get to watch Moki, my staff, carefully ease Pi Bu into the shower, slowly ask him if the water was warm enough, quietly plead with him to stay seated just a second longer. Watching Moki nearly moved me to tears. Every motion was so gentle, and every act so attentive to this suffering and angry man. I had a front-row seat to watch Moki, the faithful sheep, caring for one of the “least of these.”

And yet, as humbly inspiring as Moki was that night, he was not actually the hero of the story. In the parable, the King is identified not as the caregiver, but as the care-receiver.

I think back to the moment when Pi Bu was sitting in a towel-covered armchair, freshly clean. We helped him to his feet, and put a fresh diaper on him.

What kind of King do we follow who allows his blind, sinful, and untrustworthy followers to strip and shower him?

What kind of Savior is this who lets the very people he is saving towel off his wet head?

What God do we worship who lets us change his diaper?

Ryan Hammill was a student on the Bangkok 2013 Global Urban Trek.

Considering there are 1.5 billion people living in mega-city slums, the Global Urban Trek was borne out of one overriding conviction: to raise up flesh and blood followers of Jesus to incarnate the gospel to the urban poor. While on the Global Urban Trek, participants will live in slum communities around the world, volunteer their time in ministries alongside the poor of those communities, and seek to love the poor as Jesus does. They’ll also be asked to seriously consider long-term ministry to the poor in the future.

Apply now for 2014 summer Global Urban Treks. Students and recent graduates are both welcome to apply.

Blog Categories:
Spiritual Formation
Your Place in the Church