When God Asks You to Move | InterVarsity
Skip to main content

When God Asks You to Move 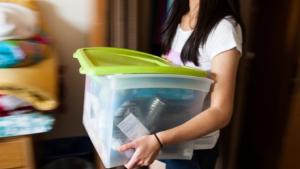 This past year, I made a cross-country move from the West Coast to the Midwest. Talk about a transition! I had never lived in the snow before, knew nothing about the local football teams and, worst of all, was leaving my family behind. Because the thought of this move was both exhilarating and terrifying, I did as much planning as I could to make it a smooth transition. I traveled to Wisconsin a month before to find housing and secure a job, began buying heavy wool clothing, and spent hours online researching the city I’d be moving to. All this planning, however, did not prepare me for the spiritual realities this transition ultimately entailed. Steve Luten, who works for Mending Wings in Seattle, Washington, and volunteers with InterVarsity, once commented that “moving is far more than physically relocating. It uncovers so much of who we are and what we have built our lives around.” The physical move from the West Coast to the Midwest ultimately became a metaphor for the spiritual “moves” God began to ask me to make.

In preparation for the move, broken furniture previously propped up becomes apparent for what it really is: broken. Like the bricks that had been supporting one side of my coffee table, aspects of my spiritual life that I considered stable in California were revealed to be unstable in the months following the move.

Spending time with God was just one example of this instability in my life. In California, it was easy to find half-hour breaks between classes for a quick quiet time or use devotions as an excuse to postpone studying for an exam. I was also motivated by roommates and staff workers to make God a huge priority in my life. Yet when I moved, these props suddenly vanished, and I struggled to find a consistent time and place to spend time with God. I was left questioning if my pursuit of God was an authentic desire, a convenient time filler or an obligation. I realized I either needed to find new props to support this spiritual discipline or deal with the deeper question of motivation: Am I pursuing God at all costs? Jeremiah once suggested that we will seek and find God only if we seek with all our heart (Jeremiah 29:13). And while props can spur us toward this pursuit of God, they cannot be substituted for our heart’s desire. When the props were removed, what appeared to be a working aspect of my life was shown to need a bit of refurbishing.

Another huge task during a move is the task of cleaning out the hall closets. As I sifted through old movie posters, outdated clothing and old school projects, it felt like I was reviewing the building blocks of my life. I was forced to decide what was essential to my future and what was not. In one hidden box, I found a complete stash of yearly organizers and planners filled to the max from my high school days. Why I had kept them I’m not sure, but it was a strong reminder of my not-so-great habit of saying yes to everyone, which often stemmed from a deep desire to not disappoint. This habit had ultimately led to an unhealthy and hectic lifestyle in California. While I was saying yes to people around me, I was in turn often saying no to God, to taking a Sabbath, to spending time with family and to a balanced lifestyle.

As I transitioned to Wisconsin, I realized God was asking me to consider two things: First, the difference between his approval and man’s approval, for “God does not look at the outside of a person but at the heart” (see 1 Samuel 16:7); and second, what achieving a balanced, healthy schedule would entail for my life. There was junk that God was asking me to clean out in my spiritual closet regarding my worth, as well as what I considered important in life. Moving afforded me that opportunity.

Perhaps the most significant aspect I noticed about the move was that transitioning inevitably stretches old relationships and often demands a transformation in how the relationship operates. It surprised me to discover this would be true about my relationship with God. Living in California I had learned to relate to God in very specific ways. For example, the ocean became a significant part of my relationship with God. Like God, the ocean was mysterious, peaceful, powerful and a constant force. It was a place where I argued with God, where I shared my joys and frustrations, and where I received personal affirmation and even forgiveness from God. With the ocean gone, it became apparent that I needed to learn to relate to God in new ways. To not do so would have strained and perhaps even hindered our relationship. To be honest, I am still learning what it means to relate to God in the Midwest, but I have begun to connect with God through the intricacies of the changing seasons, something Southern California lacked. With each season, I’m learning to see different aspects of God, such as his role in creating life and bringing death. The seasons are beginning to shape the yearly rhythm of my relationship with God in ways that I never could have fathomed in California. My relationship with God therefore did not suffer with the move; rather it has deepened and been given new life.

If I have learned anything from this move, it has been this: When God asks us to move, we are being given an opportunity to refine our lives and become more of the person God made us to be. I never would have chosen to move to the Midwest on my own accord; nor would I ever have chosen to reflect deeply on where my spiritual life was at if I had stayed where my life was comfortable. But God knew the move was what my life needed. It has been over a year now since I’ve made the transition to being a UW Badger, to snow, to cheese and to being a Midwest-loving girl, and while I can’t say that it has been the quickest or smoothest transition, it has been good.

Sarah works with InterVarsity at the National Office and was on staff in California at the University of California, Santa Barbara, and Santa Barbara City College.

I’m really thankful I found this article. I’ve really been struggling lately accepting that my life actually has a chance at moving forward and that might mean moving to an entirely new place someday. In my case it would be California if my husbands dreams were to come true. And that should be enough you’d think right? But the thought comes with much anxiousness and change that I thought I always had at least when I was single. Now that I’m about to be a mom it’s like staying put in the comfort of my own home and near my family feels the most desirable but what I yearn for most I a life motivated by faith not just by family conveniences and prevention of parental judgement to make the “correct,” decision for my family and I. Reading your article reminded me of the whole thing that set me free in the first place which was discovering life with Jesus and when that was the goal, truly nothing else(or should I say everything else) mattered. Because it was just me and Him. Now the real challenge is to trust that it is still the same love story but He loves my husband and my future daughter just as much and they are just as much of the plan and story even if I don’t know the next steps. A life connected and led by God sounds more desirable than any safe one that leaves me in control. I don’t even know how old this article is but I’m glad you posted it!!

Your comment resonated with me. I am a mom of 3 young boys and have always lived close to my family. My husband and I now feel called to move to Oklahoma closer to his family for a lifestyle change we think would be best for our family and long term goals. It has been the most heart wrenching decision I have ever made, but I can feel God gently refining me and drawing me close to Him through it all. A big thought that has been on my mind is, "In light of eternity, my momentary discomfort and heartache at leaving my family and familiar surroundings will seem so small"..I believe God has greater things and a purpose ahead for us (especially our boys) if I just trust His leading. Blessings to you and your family, I will keep you in my prayers!