Why Do We Do Communion? | InterVarsity
Skip to main content

Why Do We Do Communion? 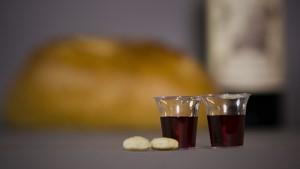 The sacrament of Communion seems a bit odd from our modern eyes. Many of us are given a cardboard-flavored wafer and barely enough grape juice to get our mouths wet, and then someone reads these words: “‘This is my body which is for you. Do this in remembrance of me.’ In the same way also [Jesus] took the cup, after supper, saying, ‘This cup is the new covenant in my blood. Do this, as often as you drink it, in remembrance of me’” (1 Corinthians 11:24-25).

What? How does this make sense?

Like with most things in the Bible, unless we understand the cultural background, we won’t be able to see the full symbolism and richness of what’s there.

Let’s talk about context. When Jesus instituted Communion, he was actually celebrating the Jewish feast of Passover—one of the most important Jewish holidays. Its roots lie in the Old Testament, and specifically in the book of Exodus, which tells the story of God freeing the Israelites (Jewish ancestors) from slavery in Egypt.

God used Moses to confront the Egyptian Pharaoh and persuade him to release the Israelite slaves. Part of the confrontation involved ten plagues on the Egyptians, the last of which was the death of their firstborn children. Acting on God’s orders, Moses instructed the Israelites to sacrifice a spotless lamb and put the lamb’s blood on the top and sides of the door to their houses. If they did this, the plague would pass over them.

The Israelites were also given specific instructions on how to prepare and eat their meal of lamb and bread that night (see Exodus 12). Because they obeyed the Lord, he led them out of slavery and eventually into the Promised Land.

This is what’s remembered in the Passover feast that Jesus and his disciples were celebrating when Communion was first instituted. It became a regular, yearly feast to remember what God had done for the Jewish people. Since Jesus and his followers were all Jews (the word Christian doesn’t get used until later), they still followed the Jewish traditions.

But Jesus was about to change things.

Remember that the Passover meal Paul references in 1 Corinthians 11 took place just before Jesus was betrayed, taken as a prisoner, and crucified. Picture this group of Jews sitting together expecting a traditional meal. The bread being broken was part of the tradition, and the wine was a symbol of shed blood, part of covenant-making. A special prayer was usually said as well—but not in the way Jesus said it that night.

Jesus took these two symbols and changed them to apply to himself, foreshadowing what he was about to do. He was telling his disciples that he would give his own life as the spotless lamb in order to make a way for them (and us) to have a relationship with God.

The Present and Future Story

So how does all of that apply to us today? Alister McGrath says in Christian Theology, “The Eucharist—or mass, holy communion or Lord’s supper—is an action carried out in the present, with past and future dimensions.” The past dimensions would be remembering God’s acts of salvation, most importantly the crucifixion and resurrection of Christ.

The future dimension can be found in 1 Corinthians 11:26: “For as often as you eat this bread and drink the cup, you proclaim the Lord’s death until he comes.” When we take Communion we are remembering and celebrating the death and resurrection of Christ, and also declaring that we are actively waiting for his return. Jesus vowed, “I tell you I will not drink again of this fruit of the vine until that day when I drink it new with you in my Father’s kingdom” (Matthew 26:29). For this reason, McGrath and other theologians refer to Communion as “a foretaste of the heavenly banquet.” As we eat our wafer and drink our grape juice, we are looking forward to the time when we will feast with Jesus in heaven.

The next time you take Communion, invite the Holy Spirit into your time. Allow him to renew the meaning of Communion in your life to show you that it is more than tasteless wafers and watered-down grape juice. Communion is a symbol, indicating that we know the saving acts of God, we remember what Christ did on the cross, and we are looking to the day when we can feast with him in heaven.

Andrea is the Executive Assistant for Collegiate Ministries at InterVarsity, as well as a graduate student at Dallas Baptist University. She loves to experience new cultures and learn new things. Her most recent endeavor is learning to play the ukulele. You can find her random thoughts at http://lamatimes.blogspot.com/.