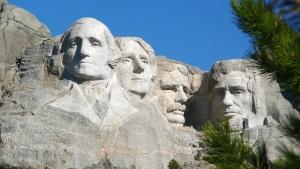 Our first president, George Washington, was born on February 22. Abraham Lincoln, another iconic president, was also born mid-February.And every year on the third Monday in February, we honor the two of them as well as all past presidents of the United States.

President’s Day can be an easily overlooked occasion, however, because most of us don’t do anything to celebrate. We don’t get together with family, we don’t set off fireworks, schools don’t all close their doors, and most of us don’t get the day off of work.

But let’s at least take a moment to remember.

There have only been 44 presidencies in the 226 years since Washington began his first term in 1789. In our short history as a nation led by various presidents, we’ve participated in momentous events that are worthy of being applauded, and we’ve also committed acts of tragedy—things for which we need to repent. If we want to be truthful, if we want to honor the past, if we want to learn, we need to remember all of those moments—the good and the bad.

We also need to acknowledge that the U.S. actually has a history, short as it may be.

My mother just got back from a trip to Italy. She stepped into cathedrals with painted frescos hundreds and hundreds of years old, walked down streets cobbled together more than two millennia ago, and visited the ruins of towns that were thriving long before the angel’s announcement to Mary that she was to bear the King of Kings.

In the places my mom visited, you can practically see the brush strokes of Michelangelo and can quite literally still see divots worn into the roadway from horses and chariots. Everywhere she stepped seemed to be marked with a piece of history. In fact, Italy drips with so much history that they simply can’t preserve it all.

As Americans, it’s humbling to visit places where our 200-year history as a nation is a proverbial “drop in the bucket.” Countries who have experienced the rise and fall of empires must chuckle as they watch us strut around like cocksure teenagers who haven’t faced their own mortality.

But a lot has happened since the Declaration of Independence was signed. The relative shortness of our history is no excuse for ignoring or denying it. If we’re wise, we’ll humbly accept that being so young means we still have much to learn, and we’ll look to others to teach us.

How Should We Remember?

Napoleon once said, “What is history but a fable agreed upon?”

Usually the history we hear is the side that yells the loudest, the side that “wins.” But, there are two sides to every story, and we rarely get to see the full picture.

For example, in school, I remember learning about Pilgrims and the eventual westward expansion, but I heard little to nothing about the bloody conflicts between the settlers and Native people. We learned about the great achievements of the first few presidents, but not that they were slave owners.

There are many ways for us to expand our historical horizons. One way to learn is just by talking to people—or, to be completely accurate, listening. Talk to people who have a different experience than your own. Talk to people from other generations. My grandfather, the son of immigrants who grew up during the Depression, is full of wisdom and integrity, and a history buff to boot; he is a wealth of information. I love to learn from him—from his own stories and the wisdom he’s gleaned from his long life.

I am also of the opinion that you can learn a lot from reading. Read books by and about Americans of different ethnicities and socio-economic backgrounds. Read autobiographies, memoirs, and biographies. And read fictional narratives. It may seem odd, but even stories that come only from the imagination of the author can be filled with truth. There is a treasure trove of perspective in books; they transplant us to another time and place, they allow us to step into the shoes of another person’s experience, they make real realities outside of our own, and they bring to life histories long past.

Why Should We Remember?

As I’ve gotten older, my knowledge has grown little by little, and my picture of history has become more complex. I’m still learning too, of course.

This bigger picture—uncomfortable as it sometimes is to discover—has given me a broader perspective. It helps me see what’s true and what’s evil in the world. And I can understand present world dynamics better when I know the historical roots of the issues.

A broader perspective also helps us learn from our mistakes as a nation. The more we acknowledge the tragedies in our past, the better equipped we are to move forward without making the same mistake again. This means living authentically now, not hiding behind a veneer of righteousness; it also means being honest with ourselves and other people.

I hope that having a broader perspective will also foster deeper grace in us. When you think you’ve got it together, when you think you’re perfect, it’s so easy to become judgmental and hard, like the Pharisees in Scripture. But with mistakes comes wisdom, and wisdom tells us that we’re no better or worse than anyone else. As Paul says in Romans 12:3:

Being filled with grace means being soft around the edges, forgiving ourselves for our failures, and offering the same forgiveness to others.

Even now that my understanding of history is fuller and more true than what I learned in elementary school, I’m not a cynical person. I am cheerful and upbeat and optimistic. In fact, my sunny disposition often makes people think that I’m naive and that I don’t see the world for what it really is.

But I’m not. Life is filled with good and bad, tragedy and blessing; it’s a both/and, not an either-or. I choose to move forward in faith, hopeful that we are learning from our past (even if it’s a two-steps-forward-and-one-step-back journey) and becoming a better country.

So let’s take some time today to remember. To honor the good things in our past. To mourn the tragic things. And to look ahead to what we hope we become—as individuals, as a country, and as believers in Jesus—knowing that at the end of history on earth, Jesus will make all things new.

For more perspective on the history of the U.S., check out these resources:

The Black Church Makes Me Proud

Growing Up Latino in the United States

A Fuller Picture of U.S. History