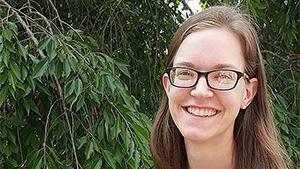 Katie Mentzer was in her second year on staff before she was sure that she was called to campus ministry. Up to that point she had thought that God was calling her overseas as a missionary, and she had looked at campus ministry as part of her preparation.

Katie was helping plant a chapter at Fairmont State University in West Virginia as she was keeping her options open. But then as she attended an InterVarsity staff conference, and several other events, she had a sense that campus ministry was where she belonged for the long term. “Things kept pointing in that direction with the opportunities that I had that seemed like a good fit with my personality and skills,” she said.

The chapter plant at Fairmont State was challenging and did well for several years despite high turnover. But the eventual loss of some key student leaders ultimately led to the closing of the chapter. At the same time, though, a group of students at West Virginia Wesleyan College (WVWC) announced that they wanted to affiliate with InterVarsity. That opened the door to a new experience in teamwork.

WVWC was an hour away from Katie’s home in Fairmont. “I realized if we really hoped to see what we wanted to happen I needed to get other people who are local involved,” she said.

Some pastors who were working with the WVWC students connected Katie with local churches and other venues where she was able to appeal for volunteers. She ended up with a team of 18 volunteers, including 6 core leaders. The team members include pastors and youth ministers, WVWC faculty and staff members, a business person, an engineer, a stay-at-home mom, and a teacher.

“I’m investing in the volunteer partners and they’re investing in the students,” Katie said. “The students are going to minister on campus. This helps me with my limited amount of investment to have a big impact and to empower people with the gifts that God has given them to work on campus.”

Katie meets with her core team once a month and does individual coaching on a weekly basis. The core volunteers are united by their desire to reach college students with the gospel message and they appreciate the opportunity for training in the tools and techniques that come out of InterVarsity’s expertise in campus ministry.

Figuring out how to work with volunteers and develop them took a lot of time at first. Some of the challenges that Katie addressed included working with people who have a variety of commitment levels and a variety of skills as well as figuring out who has transferable skills that are useful in campus ministry and what skills need to be taught. “Pastors have a lot of transferable skills, but they might not be contextualized for the campus,” Katie said.

She also discovered the importance of partnering with volunteers, offering them investment and ownership, and not just delegating to them. “We’re the body of Christ working together,” she said. But there are others who can only volunteer a little bit here and there. “We need all of them,” she added.

Katie is hoping what she’s learned about calling and equipping volunteers will help other staff find ways to multiply their efforts, as InterVarsity seeks to expand to hundreds of additional campuses through our 2030 Calling. Alumni, faculty, pastors, and local community members can all play key roles in campus ministry.

Currently a lot of volunteer activity in campus ministry exists at two extremes: those who occasionally bake cookies for the local chapter and those who are official full-time volunteers. “We haven’t found that nuance in the middle,” Katie said. When more options are identified, it’s possible more people with a greater variety of skills and abilities will be able to find a place to fit, such as mentoring, coaching, helping at events, leading a meeting, etc.

When there is no local campus ministry staff, volunteers offer the possibility of stability and better connections with the community. “How do we connect to the people who love the campus even more than we ever will because they are there, they are connected?” Katie wonders. “It’s been really refreshing and life-giving to work with people who are of a similar mindset and I know will be around longer. We’ve seen the ministry blessed as we’ve opened the doors to other people coming in and investing in the students.” 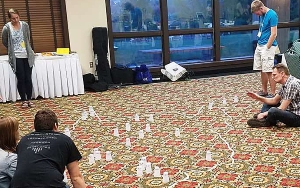 This year, after the annual regional staff conference, volunteers were invited to a partners conference. There they prayed for all of West Virginia’s campuses and received further training from other InterVarsity staff. “It was a good time for staff and partners to network, be encouraged, and learn from each other,” Katie said. “We are planning to do it again in the coming years.”

Jesse Roselius, Katie’s supervisor, has been observing her faithful and bold discipleship ever since she transferred as a student to West Virginia University (WVU) and helped reestablish the WVU InterVarsity chapter. “She steps up to the challenges even when she is faced with new obstacles,” he said. “Katie has hit her stride developing leaders, seeing folks come to faith, starting work among Greek students, faculty, athletes, and internationals. Most recently, her work in partnership development with volunteers has been stellar.”

Katie likes seeing people discover God in new ways. That can happen a lot in campus ministry. It also happens when working with volunteers.