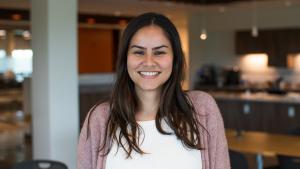 I sat down at a table in the dining hall and texted an old friend from high school. “Are you at orientation?” it read. Waiting for a response, I looked around the room to see groups of people sitting together and joking about their dorms, majors, and what they did last summer. I wondered how they connected so quickly. Was there a team-building exercise I missed? Did everyone coordinate with their childhood pals to go to the same college? Lunch ended, and I decided my goal that weekend would be to make a few lasting friendships, people who could accompany me on smoothie runs or free movie viewings on campus. But I left orientation with that goal unfulfilled.

A week later, someone stopped me before entering the student center. She asked if I heard about InterVarsity—which I had because my brother was a part of it—and handed me a list of small groups. “Thanks,” I said, but no thanks, I thought. I didn’t come to college to go to church. Plus, growing up in church meant I already knew Jesus. Why would joining some group further establish that? I left her with an “I’ll try to make it,” but knew it wasn’t going anywhere near my calendar.

Instead I spent the next two years joining and quitting student clubs, dodging invitations from my brother to come to Bible study, and applying to transfer to another university because I thought it had “better student life.” It became apparent that nothing was fulfilling me. Instead, I envied those who were having the coveted college experience, the years that were supposed to be the best of my life. They weren’t—they were boring and lonely.

When I moved into a student apartment my junior year, I thought I found the remedy. But then, a toxic sense of pride and independence started to consume me. I was convinced I didn’t need anyone else to be content and that happiness was as easy as living closer to campus and going to parties.

But when the novelty of all that wore off, I couldn’t ignore the fact that something was still missing. I couldn’t admit it, but I wanted to connect—to others, to something or someone greater than me.

It was in that place of desperation and failure that I finally gave in to going to an InterVarsity conference (called “Sonburst” at the time). Even though I didn’t want to go—considering how uncomfortable it would be to hang out with a bunch of strangers for a weekend—I pressed that register button and felt a strange mix of urgency and confusion. Isn’t this what I wanted? Friendship? People to grab smoothies with? But I didn’t want it in a faith-based context. I know about Jesus and don’t need this, I thought. I really did think I knew him—even without prayer, without being challenged or studying who he is and why it matters. But at Sonburst, for the first time, I realized how wrong I was.

That weekend, I discovered a community I never knew I needed: a group of people that genuinely cared for me and wanted to understand who I was. We gathered in small groups one morning and someone made a confession with complete vulnerability. The way others responded made me realize I could be honest and vulnerable too. I didn’t need to hide any part of me. For the first time since starting college, I was connecting in a way that surpassed small talk and group projects.

I also discovered a new knowledge of who Jesus is. I realized that the gospel was this radical, redemptive truth, and I was excited about it. I wanted to find out what it meant to be “missional.” I wanted to dig into scripture and learn as much as I could. I wanted to know Jesus and to have the closest of bonds with him. Because as it turned out, there was more to Jesus than what I thought I knew—more that needed to replace whatever I settled for before.

On the last day of the conference, a feeling of peace and belonging overwhelmed me as we met in campus groups to make “I will…” statements. In that moment, I was ready to erase the boundaries I spent years drawing between myself and others. I was ready to surrender my overzealous need for independence. I was ready to accept the love I was experiencing and reject the notion that a superficial relationship with my maker, and with everyone else, was somehow enough.

The commitment I made four years ago meant I had to adjust my schedule to go to small groups. But sometimes, committing to Jesus meant living in places or cities outside my comfort zone. Other times, it meant staying put when I really wanted to go or leading a small group when I didn’t feel equipped. Last year, it meant volunteering to lead another chapter in my hometown. It’s meant and continues to mean trusting Jesus in every decision and every step I take post-college.

Now, I’m reminded constantly that we have a good Father who wants to give us good gifts. The gifts of understanding, community, and a promise between a Savior and his people, were offered to me time and again. For too long, I said no to those gifts. Finally accepting them meant finding what I was missing. It meant I wasn’t alone.

There are many students just like me who enter college thinking they know who Jesus is but pursue other things over him. But InterVarsity wants every college student to have the opportunity to experience God's good gifts of community and a deep walk with him. Find an InterVarsity chapter near you by clicking the button below.