5 Reasons Why I Love InterVarsity 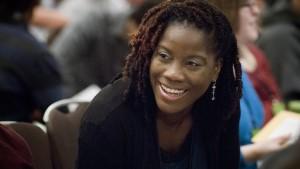 In 2003, I stepped off the train I’d taken from Chicago, in awe of God’s goodness. Not only had I just been offered a job that was actually related to my English major (a small miracle), but the offer had come from InterVarsity Press, an organization that I deeply respected and that had influenced my grandparents, parents, and sister in profound ways.

Over ten years later, with a move from IVP to InterVarsity’s headquarters in Madison, Wisconsin, fifteen months ago, I’m still incredibly proud to work for InterVarsity Christian Fellowship. Our recent triennial Staff Conference in St. Louis, Missouri, highlighted for me just a few of the many reasons why.

1. I love that InterVarsity equips students for long-term faithfulness, not short-term, quick-fix faith. In a setting where campus staff members have only two to four (or six) years with a given student, and limited time and resources, it would be easy for them to simply try to get as many students as possible through the doors of the InterVarsity chapter, where they can then dazzle them into saying yes to Jesus, the One Who Can Solve All Their Problems.

But embedded deeply in InterVarsity’s values is a commitment to see not just converts but true disciples of Jesus developed. Disciples who know how to study Scripture for themselves, and who pore over God’s Word to find truth for their questions. Disciples who care deeply about injustice, and who go halfway around the world to discern if God might be calling them to long-term service in slum communities. Disciples who are not just on campus to consume, but who work for the good of the whole campus community out of love.

I love that we ask students to face, not run from or gloss over, hard things on campus and around the world—to take up their crosses and start conversations about inequality and sexual brokenness and party culture. And I love that we give them tools to participate in God’s kingdom on campus and then on into their post-college years, in whatever city and life circumstances they find themselves. Staff Conference gave a clear picture of this deep discipleship, through videos and testimonies of alumni like Will Haughey and Barbara White—alumni in whose lives God used InterVarsity to ground their faith and prepare them for long-term vocational ministry.

2. I love that InterVarsity is actively furthering the conversation on the state of racial injustice in the U.S. as well as helping students value their own ethnic identity, and that of others. This was clearly on display at Staff Conference, as University of California–San Diego student Iris Delgado shared what God did when she courageously held a workshop titled “Empowerment Through Jesus” at a secular, statewide conference for students of color. And University of North Carolina–Wilmington senior Brent Campbell shared his powerful story of experiencing racism on his campus and then choosing to forgive the perpetrators because of God’s work in his heart through his InterVarsity chapter.

We also experienced rich worship at Staff Conference led by a multiethnic worship team, singing in Spanish, English, and Tagalog and dancing to styles ranging from gospel music to folk. InterVarsity gatherings are the only worship settings where I’m stretched with so many different languages and styles—and my worship is that much richer because of it. It’s a worship that is intellectual, emotional, and sacrificial for me, and it allows the worship styles of ethnic-minority brothers and sisters around me to shine.

3. I love that InterVarsity staff encourage students to display the love and wisdom of Jesus in whatever field they’re called to—whether it’s physics, education, or psychology. In President Alec Hill’s opening talk, he told the story of Ken Elzinga, a longtime, highly regarded professor of economics at the University of Virginia. When Ken was a student, he contemplated going to seminary to be a pastor, but his InterVarsity staff member steered him toward teaching in the academy, a profession he was clearly gifted for.

I was struck by the weighty role college ministers play in the lives of students as they discern God’s call for and alongside these twenty-one and twenty-two-year-olds and serve as a guiding, truthful presence in their lives at a crucial time. Again, the Staff Conference program showcased the range of vocations InterVarsity alumni are serving in, and Amy Sherman’s words on vocational stewardship, as well as the official launch of InterVarsity’s ministry to students in the arts and to athletes, only reinforced the vision we have to see students take God’s light to every vocation.

4. I love that InterVarsity refuses to compromise on its core values. Campus staff member Liz Thrasher Wheatley shared firsthand the challenge of continuing to do campus ministry in the face of limiting campus access policies. Last year, the California State School system, in which Liz works, mandated that membership and leadership for all school clubs must be open to anyone. This excludes InterVarsity chapters from campus; though InterVarsity chapters are open for any and every student, leaders must be confessing Christians who agree with InterVarsity’s statement of beliefs.

On campuses that have mandated policies like these, it’d be easy for InterVarsity to simply drop our student leadership requirements, or let leaders be elected by their peers. Or campus staff could do all the leading. But I love that we refuse to sway in our commitment to develop students into leaders and to call leaders to a bold belief in Jesus as Lord. Instead, in cases when we’re derecognized, we face the challenges of meeting off-campus and trust that God will work even more powerfully in the midst of opposition.

5. Finally, I love that InterVarsity is not about the kingdom of InterVarsity but rather the kingdom of God (a topic John Ortberg powerfully expounded on in his closing talk at Staff Conference). Our triennial Urbana Student Missions Conferences are perhaps the clearest example of this, as students are called to listen to God about how he wants to use them in his great, global mission.

But Staff Conference was a reminder of the many ways God is using InterVarsity to bring his kingdom to light on campuses all over the U.S. in significant ways. Every time a student invites a friend to study Scripture or a student on the fringe is invited in to a small group or a conversation about Jesus’ role in racial reconciliation is held, God’s kingdom spreads on campus. And those students leave campus to intentionally be agents of God’s kingdom wherever they live and move and have their being.

Those are five reasons why I love InterVarsity. What are yours?

Check out all the great content from Staff Conference 2014 on our Twentyonehundred Productions home page.