7 Things We Need to Learn from the Global Church 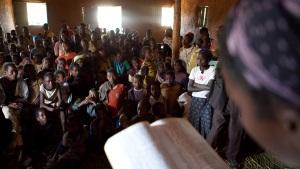 I’ve lived in the U.S., Nicaragua, China, and South Africa. I’ve spent time with the Church in Guatemala, Ethiopia, Poland, Thailand, and Kenya. I’ve talked with sisters and brothers from the U.K., Iran, Mozambique, New Zealand, Germany, and the Philippines.

Sadly, we in the U.S. are not widely recognized as learners, as thoughtful disciples, as understanding people. We are still mostly known for our lack of language learning, our ethnocentricity, and our cultural imperialism, all understandably. But thankfully, we are growing.

Seventeen years ago, a friend and mentor spoke of his years in El Salvador during the civil war there. He told of how differently people read and interpreted Scripture, how their prayers amazed him, and how his understanding of our Father was challenged and changed.

Since then, I too have gained insights from other followers of Jesus in hard places, from radically different backgrounds, both cultural and economic—insights that I think have a lot to teach us right now, in particular, in our current fractious season.

Here’s what I’ve learned from them.

Faith is a verb.

When you have little to rely on or trust in, you focus your attention on God, on his Spirit’s action today. You expect to see God’s action here and now, like when our friend Juana in Nicaragua prayed that her husband wouldn’t die when caught out in a hurricane. Often, we Christians in North America seem to forget that we, too, follow the living God. How are we expecting him to act in the next weeks, or months, or four years?

Sharing is what we do.

I have had a family’s only chicken killed to honor me as a guest. My wife (and now kids) and I try to be as welcoming and generous as Christians we’ve met in other countries. This can go unappreciated by some people, and at other times, it can just be weird. For example, at a Thanksgiving meal a couple years ago, we had two Chinese university students, an older woman who was divorced, a young married couple from out of state, and my brother-in-law. But those people needed a place to be thankful, and we were thankful to have one to offer.

My friends in Nicaragua would wait hours for a tractor to take them to town, days for the next shipment of onions to arrive, and years for some relative to return to visit (as there were no phones or electricity in the village). Normally, I press hard, I take initiative, I struggle. I pack my days full. I force things. I am impatient. I need to continue to learn to wait, more like my sisters and brothers in the Church elsewhere.

Work is a blessing.

Too often people I knew overseas had nothing to do. It might be that they were waiting for the rainy season so they could plant their crops. Or they needed a permit before starting a new job. And sometimes there was really nothing to do. While in Nicaragua, I actually got through my entire to-do list. Every book was read. Every letter was written. Every task was done. There really was nothing to do but sit.

I’m now grateful that I have work, and meaningful work at that. And I’ve learned a lot about how to work from our friends in China, like those in college who would study from 7:30 a.m. until 11:30 p.m., seven days per week. (You can read more about this in our book.)

Rest is also a blessing.

While people without much work to do sometimes rightfully lamented their state, I have learned a lot about slow seasons. Agriculture will often do that to you. For the area where we lived in South Africa, the dry season means no planting, no weeding, no growing, no harvesting. We (and more so our farmer friends there) waited for the rain. And the Lord sent it.

Need is an overused word.

Our years overseas have been much simpler than the average North American Christian’s life. But they’ve still been more complicated and busy than most of our local friends’ lives in these places. I try to turn as many of my “needs” as possible into mere “wants.” It helps to remember my friends who wanted (but did not need) a floor in their homes or who wanted (but did not need) food other than cornmeal mush and a bit of sauce.

Joy bubbles up in unexpected places.

Our friends often have not had much beyond struggle, but they also have a lot of joy. We have busted our guts at friends’ stories while sitting on overturned five-gallon buckets in Nicaragua. Some friends in China explained that eating handfuls of sunflower seeds and spitting the shells on the floor made any night feel like a party. Our sisters and brothers in hard places often have smiles and laughter that far outstrip the average, dour churchgoer back home.

Perhaps the key is the rest and the simplicity, the patience and the faith. How can we exercise those in greater measure today?

Adam Jeske has served in Nicaragua, China, and South Africa.

GlobalChurch
The missional church conversation has focused almost exclusively on Western thought at the expense of hearing the voices of the global church.
Misreading Scripture with Western Eyes
Brandon O'Brien and Randy Richards shed light on the ways that Western readers often misunderstand the cultural dynamics of the Bible.

By Tom Lin
Why I Still Have Hope for Evangelicalism

I understand why many who share evangelical theological commitments are reluctant to speak or have considered abandoning the term and the identity as meaningless. But I still have hope for evangelicalism.