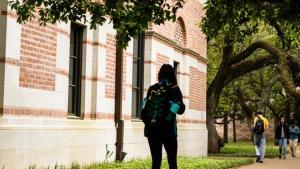 When I was a senior in high school, my parents tried very hard to convince me to go to our local community college. They made countless arguments about how I’d be debt free and how I’d get the same level of education since our local community college is one of the best in the country. And whenever I argued back about wanting the “typical college experience,” they’d say I could get that when I transferred.

Still, nothing they said could make me overlook the fact that my local community college felt like high school 2.0. I didn’t want to live at home with my parents when all my closest friends were going off to four-year schools. So what if I’d have a bit more debt? I wanted the experience! In a lot of ways, I had tunnel vision and only saw one way that college should play out for me.

Ultimately, my time in undergrad was amazing and totally worth it—even if I cringe each month chipping away at my student loans. During my four years at McDaniel College I became a Christian through InterVarsity, met my husband, and made lifelong friendships.

But fast-forward to the present. Though I was strongly against attending my local community college, I’ve actually ended up being called to that exact campus to plant an InterVarsity chapter. (Jesus can be funny like that.) And while there are definitely challenges, the truth is I love ministering here!

I think my lack of enthusiasm about attending my local community college highlights a greater problem and one of the main challenges of doing ministry in this context. Community colleges are often overlooked because they aren’t seen as places where meaningful community can be built or where significant growth and change can happen. They are often seen by both outsiders and students as transient spaces, the land in between, a jumping-off point to the next big thing.

And it’s true; students are on campus for way less time. On average, they are there for just two years before transferring. But some students only come for one semester, and others come off and on for several years.

While there are many students on campus who are recent high school grads, there are also a lot of nontraditional students. Older students with families, single parents, people who took a gap year(s) for a variety of reasons, students with packed schedules who are working part-time or full-time to pay for their classes, and everything in between. In our weekly Bible study alone, we’ve had everyone from a student who is dual enrolled in high school and our community college to a gentleman in his 60s, who used to work at the campus bookstore.

Because students aren’t living on campus it can also be difficult to foster community. Students often show up for class and leave immediately, not really desiring to stick around on campus because they don’t have a lot of friends, things to do, or places to hang out.

Despite these challenges, doing ministry at a community college has been one of the most rewarding experiences I’ve had as an InterVarsity campus minister. Doing ministry on campuses like this means choosing to meet students in a transient space, creating intentional community, and casting vision for them to see their campus as more than a jumping-off point.

Even though they’re only around for a short time, and even though they don’t have a strong desire to spend more time on campus than necessary, the students I’ve connected with have all expressed a deep desire to belong in community. Which makes sense, right? God has designed us to be in intentional community, so of course, these students long for that too!

I always tell my students that I believe that God has brought them to this campus for a time such as this, and that if they choose to accept the invitation to root themselves there for a season, God will show up in powerful ways.

There are tens of thousands of students spread across three different campuses in my community. It’s extremely difficult to find friends if you don’t already know people on campus. But by creating a space for students to connect over the study of Scripture, we’ve allowed friendships and relationships to flourish that might not have otherwise existed. And because my students have found this community, they’re even more excited to share about it with others and invite their classmates.

Even though student turnover happens quickly, I’ve found it possible to sustain our ministry on campus because new students are learning about and joining our fellowship every semester. I’ve had to accelerate leadership pathways in ways that initially felt unfamiliar but now make so much sense. If students consistently come to Bible study a few weeks in a row, I often invite them to consider doing a brief leadership training, something I never really would have considered at a four-year school.

Community college ministry has taught me that making invitations to students to quickly step into leadership roles actually has amazing benefits. Right away, they feel connected and tied into our mission and vision for campus, and even if they don’t stick around to do leadership in our ministry, they have a slightly bigger picture of God’s kingdom at work around them on our campus and in their community.

Don’t overlook your local community college or the students there. It’s a transient space, but God can, will, and is working in those spaces already! The number of students I’ve met who were just waiting for an opportunity to be part of and lead in Christian community is crazy. I just had to lift my eyes and start looking. So as you lift your eyes, what do you see?

Carrie has served as campus staff since she graduated in 2013. She works in Maryland at Montgomery College. You can support her ministry at https://donate.intervarsity.org/donate#17478.

By Carrie Carey
Church Membership—Not Perfect But Still Worth It!

But I believe, as a follower of Christ, that it is essential to be an intentional, active member of a church community. Membership facilitates opportunities for vulnerable relationships and accountability.

God gets there first. He’s at work before we ever arrive on the scene. And that makes us, Christian witnesses, detectives and investigators of sorts.