By Gordon Govier and Nathan Peterson

Thriving Chapter Planting & Partnerships in the Middle of a Pandemic 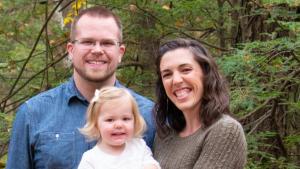 God has been with Justin and his team every step of the way since—even in the midst of a global pandemic.

Justin soon realized what an ambitious decision he’d made after starting his monthly visits to the area. “Our campuses and the number of undergraduates in our area suddenly tripled when we included northeastern Pennsylvania,” he said. “There was nothing going on up there in terms of InterVarsity. It was kind of like a no-man’s-land, a dark corner of the region. We started exploring to see what God was up to.”

With nearly a dozen campuses in Scranton and surrounding communities, Justin discovered that only one campus minister from the Coalition for Christian Outreach (CCO) had been at work in the area. Eager to see even more students reached, the minister invited InterVarsity to come get involved.

So began the planning and planting that became known officially as Mid-Atlantic InterVarsity’s 10 by 22 Plan—a goal of planting chapters at ten schools by 2022.

As Justin networked with local residents and churches, he found that many people were eager to see campus ministry established. But he needed a campus minister willing to move to the area and begin the chapter planting process. After reflection, Justin approached Ryan Jones.

Ryan had first heard about InterVarsity from his sister and, a little reluctantly, decided to check it out during his freshman year at the University of Delaware (UD) in 2009. To his surprise, he discovered a community of people who embraced and accepted him.

Transformed through his participation in UD’s chapter, Ryan decided to become a campus minister after graduation, so more students could have that same experience. In 2014, he joined a planting cohort, helping with chapter plants at Villanova University and Widener University.

“Each year at Widener, we grew,” Ryan said. “The thing that was consistent was that the Holy Spirit was at work in my students.” One particular class of missional freshmen invested in the chapter from the very beginning and helped it reach a peak participation of about 70 students.

Given all this experience, Ryan seemed like a great candidate to focus on helping develop northeastern Pennsylvania. But when Justin approached him, Ryan declined. He was deeply involved with the ministry at both Widener and Villanova and wasn’t willing to leave until he was able to raise up other staff to take over these campuses. But in the spring of 2019, that’s exactly what happened with God calling two new campus ministers, including one of the Widener students Ryan had mentored.

Ryan took this as a sign that it might be time to try something new. Taking time for discernment and prayer, he decided to accept Justin’s offer. He and his wife, Caroline, moved to Scranton in July 2020, in the middle of the pandemic.

“Ryan and his family made an incredible sacrifice to move to a place where they knew nobody,” said Dan McWilliams, Mid-Atlantic InterVarsity’s Regional Director.

Since the launch of the 10 by 22 Plan, God’s providence has been on full display through burgeoning partnerships with local churches, the generosity of ministry partners in raising $125,000, and many students from local schools engaging with InterVarsity through recent Instagram social media campaigns.

“We have made considerable progress in resourcing this vision with funding and staffing despite this challenging season,” Dan said.

In keeping with the 2030 Calling’s emphasis on collaboration, Ryan and the staff worker from CCO have worked together closely. This staff transferred all his connections and relationships over to Ryan before moving to a nearby city to start planting new ministries. “We decided to not plant ministries in each other’s areas so that together we could reach all the unreached campuses in northeast Pennsylvania,” Ryan said. “It’s been extremely freeing and refreshing working together. If we let go of the idea that InterVarsity needs to be at every campus, we can actually reach more students.”

Since the start of the fall semester, 20 students have gotten involved with InterVarsity chapters across three different campuses. “Ryan has only been working with students for six weeks. And all of this is happening!” Dan said. “[Ryan] thinks that by the end of the school year, they could have 60 students involved on six of the eight local campuses.”

“We need to pray that this would deepen in the lives of students and that momentum would carry on as students get tired of showing up for Zoom calls or anything online,” Dan said. “As I reflect on why this is happening at this point—and we’ve got a long way to go—I’m encouraged by how God orchestrated all the partnerships to set Ryan up so well. . . . It’s been a team effort from the get-go, and there’s a real sense that God was calling us to this place.”

Interested in learning more about chapter planting? Click here for a comprehensive set of resources to help start something new on a campus near you.

Gordon Govier is a former radio news reporter who is now a member of InterVarsity's communications staff.

That is so exciting! Is there

That is so exciting! Is there an INTERVARSITY Christian Fellowship at Scranton University??

Hey Grace, thanks for asking!

Hey Grace, thanks for asking! Check out our Find a Chapter tool under the Get Involved tab of our website (here's the URL: https://intervarsity.org/chapters?school=University%20of%20Scranton). It has an option to contact staff in the area!

Reflecting on how God worked through these calls to faith, Kristen said, “I’ve seen student leaders long for the kingdom during the coronavirus [pandemic] more than ever before.”