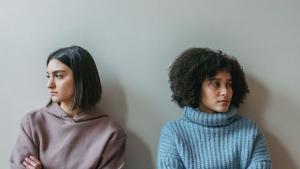 Recently, my friend and neighbor from my InterVarsity chapter texted me, ranting about how she hadn’t accomplished the tasks she’d set out to do that Saturday, instead focusing on deep cleaning her apartment, looking for jobs, and baking brownies.

As someone who procrastinates in somewhat less productive ways, like going on a deep dive of Hilary Duff related YouTube content (I highly recommend her Architectural Digest Home Tour) or getting the urge to spend 40 minutes making a seven-second TikTok, I wasn’t as floored by her procrastination as she was. I made an insensitive comment digging at her procrastination that I thought was simply light teasing.

Shortly after, she came over to bring me one of those brownies (per my request) and told me that my comment had made her feel upset and unnecessarily called out.

In that moment, I knew this was an opportunity to practice our InterVarsity chapter’s model for resolving conflict, based on Matthew 18:15-17:

If your brother or sister sins, go and point out their fault, just between the two of you. If they listen to you, you have won them over. But if they will not listen, take one or two others along, so that ‘every matter may be established by the testimony of two or three witnesses.’ If they still refuse to listen, tell it to the church; and if they refuse to listen even to the church, treat them as you would a pagan or a tax collector.

Countless times, Jesus’ words have helped me keep my friendships from falling apart and allowed me to let loose unnecessary, emotional weight by pursuing conflict resolution.

Addressing conflict outright can feel awkward and irregular because it’s the opposite of what we’re taught in society. Especially in college, there’s an emphasis on hurting someone who hurt you or ghosting them instead of pursuing reconciliation. As Christians, we have to be steadfast in pursuing biblical norms over societal norms. The Matthew passage is the heart of this post, but here are some of my tips in pursuing reconciliation based upon it.

Once, when my feelings were hurt, my campus minister taught me to stop immediately pinning my feelings on whoever I felt hurt me. When we say things like, “You hurt my feelings when you said XYZ to me,” we’re focusing more on assigning blame than resolving conflict.

Instead, we need to reword the phrase to “I felt hurt and embarrassed when you said XYZ.” This way, we’re entering the conversation by focusing on how we felt. This protects the conversation, preventing conflict in case this was a circumstance of misunderstanding.

We all have emotional triggers, and sometimes our friends don’t know about them. It could be that you’re like me, where you gently tease to communicate affection, but you may not realize that your friend is sensitive to that due to their past, trauma, or just personal preference. Saying “You hurt my feelings” can lead to our conversational partners immediately going on the defensive. Communicating the hurt first prioritizes the resolution of our feelings and leads to more fruitful conversations.

Swallowing the Pill of Our Own Toxicity

I felt deeply wounded by a friend during sophomore year. His intention was pure, wanting to challenge me about my identity. I thought that several aspects of this challenge were unbiblical and that he went about it in a way that was unfair and prideful.

As we tried resolving the conflict, I admit I was stubborn. I was insistent on protecting my heart and removing him from my life because the hurt was so deep. I failed to recognize the value we added to each other’s lives. I had turned protecting my heart into a dramatic, self-centered friend breakup.

My campus minister helped me recognize my hypocrisy. He pointed out that I had served my friend well because I was one of the few to challenge his pride, and my friend served me well because he was one of the few people who cared enough about my relationship with God to challenge me even when I felt he wasn’t entirely right. I realized, through my campus minister’s diligent probing questions, that protecting my heart didn’t have to mean cutting off anyone who showed a toxic trait out of my life. If I did that, I would have no friends. I wouldn’t even be in my own life.

So much of biblically resolving conflict involves asking ourselves, What do you wish someone would do to you if you messed up this badly? The answer flows from Jesus’ response to us: forgiveness. That doesn’t mean that we abandon our hurt. It means that we approach conflicts with the agenda of “I want us to heal” and not “I want to prove that you’re wrong.”

Often when I experience conflict, I’m not wronged; I’m just annoyed. The issue lies with me. If I immediately tell someone that they’re annoying me, I wouldn’t be aiming to resolve the sin because they didn’t sin. I’m the one sinning because I’m not loving them the way that I should by letting my annoyance reign supreme. It’s okay to be annoyed sometimes, but it’s not okay to let those feelings control us. Feel your emotions but don’t let them be more of an authority over your actions than God.

So, I have to pray. I pray that I’ll love them more like Christ, even when they get on my nerves. I pray that I will begin to perceive their qualities that bother me, not as irritants, but as loveable quirks.

Now, sometimes, the annoyance can be resolved in conversation, but often it needs a waiting period. If I share my frustration immediately, my intentions will not be based in resolving the conflict. Knowing whether to pray and later confess or just pray comes with wisdom, discernment, and consultation with others (consultation, not gossip).

Ultimately, the solution is always prayer. Whenever we experience conflict, we should be praying for our hearts to be softened and more like Jesus, easily and readily able to forgive. And we should pray for wisdom in knowing how to proceed and for conviction for what fault lies with us.

If this style of conflict resolution intrigues you, and you’d like to be part of this kind of life-giving, healthy community, find an InterVarsity chapter near you.

Calvin, what a fabulous post. This, in particular, is such a money quote: "So much of biblically resolving conflict involves asking ourselves, What do you wish someone would do to you if you messed up this badly?" Thanks for sharing this!

The point is that you’ll inevitably hit some speed bumps in your first year of college, and I want to offer you these lessons to help get you through.

Transformation can be exponential. When one student at the University of Massachusetts Boston caught a glimpse of God’s transforming work on campus, she began praying and longing to see that happen on her own campus among fellow Black students.

Anxiety is a monster, an intense, often debilitating monster. It can cripple us with fear and keep us from living our lives. If there ever was a time to call out the monster, it’s now.

By Kelly Aalseth
Can God Help with Homework? Asking for Wisdom in Daily Life

God loves to talk with us! And the more we become familiar with conversing with him about the small things in life, the less scary it is to listen to him for the bigger things.