The God Who Sees—New Thriving Ministry at UMass Boston 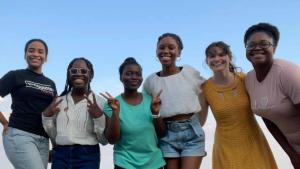 In January of 2020, students from the University of Massachusetts Boston (UMass Boston)—where I serve as an InterVarsity campus minister—attended a regional InterVarsity Black Campus Ministries (BCM) Conference. Janet, a third-year student at UMass Boston, happened to receive an email about the event. Though she’d never been to an InterVarsity event before, she asked if she could get a scholarship to attend the conference.

There, she connected with Black students around the region, attended a seminar on hearing from God, and learned about campuses that hosted Bible studies for Black students to experience Jesus.

In April, Janet called me in tears. She was beginning to see the many needs and opportunities on her campus. And she was sure that God was calling her to reach fellow Black students. She was heartbroken over not knowing if they had a strong community and God-centered places of hope as the pandemic continued spreading.

Over the summer, we connected with Abigail, a transfer to UMass Boston who was part of InterVarsity at her community college and was eager to serve. A month later, we met Laryssa over Instagram. She asked if she could join us in helping to get BCM started. Just a few months after Janet began praying, she already had a team of fellow student leaders who wanted to see God reach their friends and classmates!

A Space for Hope & Healing

As we prayed, the need for a space for Black students to share and receive care became clear. Calls for racial justice were reignited that summer. Protests picked up in Haiti, where many of the students immigrated from, and the pandemic put a spotlight on health disparities between US and African countries, where many students have family.

This led us to launch a series of online discussions giving Black students space to explore the ways they have been made well by God, grieve the brokenness around them, and be real in sharing their stories with one another. The first week, 15 new students joined, and the conversation went two hours over time as students got to share some of what they had been thinking about and carrying.

A Growing Passion for Prayer

Over the school year, the BCM Team insisted on ending discussions with space for prayer. The entire group grew in hearing from God and experiencing his presence as they discussed difficult topics. As students processed news of injustice and shared their own experiences of racism, they prayed Psalm 139 over each other and pressed into what was beautiful about their cultures and the ways God made them. As they studied the ways Jesus sees those who may feel overlooked, students prayed about who else God might be calling them to bring hope and healing to.

One graduate student sensed God calling her to pray for people who were incarcerated. She also began researching opportunities to teach or volunteer within the prison system.

Students' friends who initially just joined for the discussion space began to stay for prayer time too. A freshman who always participated in discussion but left before prayer stayed to the end of our final meeting. She shared that even though she knew nothing about Christianity, she wanted to learn more.

Another student who had walked away from faith before college because of hurt from the church agreed to try listening to God in a BCM meeting. She sensed God saying, When you wake up in the morning, just try to talk to me. I’m not that scary. The freedom she felt from BCM leaders and the gentleness she experienced from God in prayer made her decide to give Christian community another chance.

Janet was excited by all that was happening. But she couldn’t shake her disappointment over graduating without seeing BCM on campus like she had asked God for in prayer.

As her senior year continued, and she prayed about her next steps, Janet found out that she had been nominated for a scholarship that would cover her master’s degree at UMB if she stayed another year. She got the scholarship and shared her joy at a sudden open door to afford graduate-level education and a sense that God was giving her one more year to plant BCM on campus.

Janet has started sharing that hope and vision with others, and all the BCM leaders from this past year agreed to lead in-person for the 2021–22 school year. Join me in thanking God for his provision and praying for our ongoing ministry at UMass Boston!

Want to find an InterVarsity chapter near you? Click here!

Taylor Straatmann is an InterVarsity Campus Minister currently serving at commuter and community colleges in the Boston area. You can support her ministry at givetoiv.org/taylors.

Wow! As a former African

Wow! As a former African college student in this region, I am so delighted to hear this! Thank you for such good news and encouragement. God is indeed alive and with us. We praise His holy name!

Thank you for sharing! My

Thank you for sharing! My sister recently graduated from UMass Boston and was a part of InterVarsity there so it is especially exciting to hear about how God is at work and answering prayers there.

By Taylor Straatmann
One Family—Learning Alongside International Students

As Christians called to reach the nations and honor God’s heart for justice, we must share a full gospel—one that confronts injustice wherever it takes place—and make space for international students to meaningfully engage with God’s Word in our US context with us and in their own way.

By Jason Gaboury
Misunderstood?—What Scripture Can Teach Us

Misunderstanding is an ancient human and spiritual problem. Many of us have experienced some form of misunderstanding as we’ve negotiated college life.

But through all my experiences of leading communities—of students, fellow church congregants, coworkers, and more—I’ve seen how transformative and essential good community can be.

Last-minute final papers, weekly discussion posts, and 12-page reports that seem to extend forever—don’t worry, I know the feeling too. For those of us who are students (and some of us who aren’t as well), there are some days—maybe even many days—when writing feels like a chore, something on a checklist to cross off.