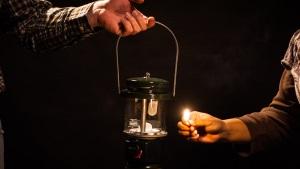 I had a significant encounter with the police on a college campus several years ago. It challenged the way I view race, power, and the importance of being present.

To set the stage, I think it’s important for you to know that, although I’m Latino, I have blond hair and pale skin. I’m the big guy who gets asked to put on the Santa Claus outfit at our Noche Buena (Christmas Eve) celebrations.

My encounter with the police came during an outreach event at a large public university in South Florida. The InterVarsity chapter I was leading included talented artists and arts students. When we talked as a group about sharing the good news of Jesus, they wanted to make sure that artists knew this was good news for them too.

So the students planned an outreach they called “Light Up the Night.” Their plan was to stand on chairs along a walkway on campus at dusk, holding lanterns and performing spoken word pieces they had written for the campus. Students who stopped to listen would be invited to dialogue about God and the arts.

The day of the outreach was marked by unrest on campus. Political protests popped up all over and threatened to turn violent. The police showed up in force, attempting to keep the peace. As the sun went down, we debated whether or not to continue our outreach. With the university’s permission, we decided to move ahead.

Stephan was a freshman, a poet, and Black. He had never performed his work publicly and felt scared about taking that risk. But he loved Jesus and his campus, so he picked up a lantern and began performing. He had written a beautiful piece about his own brokenness, the brokenness of the campus, and God’s power to fix everything that’s broken.

Within moments of his first words, the golden glow of his lantern was interrupted by the flash of blue and red lights. Standing across the walkway from him, I saw fear move across his face. He had gotten “the talk” that so many Black kids get from their families, warning them to be polite and on their guard around the police, so he knew he had reason to feel nervous. I watched as he drew a breath, raised his lamp a little higher, and continued his poem.

Something about his courage stirred me. Before I knew what I was doing, I started moving. The police officer stepped out of his vehicle and approached Stephan. The lights kept flashing. Eyeing his uniform and his hand on the butt of his holstered weapon, I stepped in between them and started talking.

The officer looked at me, taking in my blond hair, pale skin, collared shirt, and khakis. His hand came off his gun, and he crossed his arms and listened to me. In the background, Stephan kept talking: “our broken hearts and broken dreams meet a broken God who breaks us free.” After a few minutes of explanations and name-dropping and, yes, an offer to pray for the officer, the lights turned off and the police car drove away.

Stephan and I hugged, though we were both shaken by the encounter. I thanked him for being courageous. He thanked me for being there with him.

Several years later, I’m still left with so many questions from this encounter.

Perhaps the most significant sign of racial progress in America today is the growing presence of cross-ethnic advocacy that flows from multiethnic community. We’ve seen this both in the immigration conversation and in the police-violence conversation.

Don’t take your cross-cultural relationships lightly. God is changing you through them—and he may use them to bring about change in the world as well.

Working for Justice and Reconciliation

The Heart of Racial Justice: How Soul Change Leads to Social Change

The Secret to Connecting to People Different from Us