Day-by-day—A Season of Unknowns at NYU 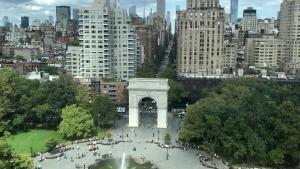 In New York City, one of the US cities hardest hit by the pandemic, God has been clearly on the move.

InterVarsity campus minister Sarah Lin watched firsthand as the normal rhythms of New York University (NYU) and its 51,000 students ground to a halt in March 2020. Lectures were cancelled. Students and faculty went home.

Standing outside NYU’s student center one evening, Sarah couldn’t help feeling like things were out of place. An eerie quiet hung over everything. The normal bustle of students heading to class, the familiar scent of nearby food carts were gone. And the spot where her chapter used to table and invite others to check out InterVarsity was conspicuously absent. This wasn’t the NYU she knew and loved.

The first day of online classes, Sarah stood on a busy street corner—a far cry from her chapter’s prayer meetings and small group gatherings on campus just days earlier. As cars, bikes, and people sped past her, she called to check in with one of her students.

Alex, a sophomore, shared with Sarah how she had long been hesitant about putting her faith in Christ. “Things will eventually sort themselves out,” she’d told herself. But looking ahead to the rest of this year and decade, Alex realized that something needed to change.

Sarah also sensed God had been stirring something in Alex’s heart and felt led to present the gospel over the phone. Alex said yes to following Jesus. “Ministry looks entirely different this week, but God remains the same,” Sarah shared later. “Join me in celebrating how the Lord has moved in Alex’s life and given her new life in him!”

Day 2—What God Had in Store

During NYU’s second day of online classes, Sarah was already missing not being able to gather in person with students. But she wasn’t going to let that stop her. ”The only logical response was to hop on a Zoom call together to study God’s Word and see what he had in store for us,” she said.

With so many drastic changes over the last few days, Sarah had no idea if anyone else would join as she logged on for the first virtual Bible study. Moments later, Erin—a freshman who’d been involved with InterVarsity since the fall semester’s club fair—logged on. Excited and relieved, Sarah took time to check in with Erin before transitioning into a time of studying Luke 10, as planned.

Then the conversation shifted. Erin shared how she grew up in church but gradually grew distracted and skeptical about her faith. Throughout her first semester of college, she started reflecting more on the way she was living and began sensing the Spirit’s invitation to fully follow Jesus. After praying and talking with Sarah, Erin realized that there were experiences in her life that needed healing. So they prayed again.

“I didn’t expect this to happen today and wasn’t prepared to talk about this,” Erin shared. Sarah was a little surprised too—in the best possible way—and rejoiced in the opportunity to invite Erin to make an adult decision to follow Jesus.

Since that decision in March, Erin has continued to grow. “I’ve learned that following Jesus looks like peace and strength in the midst of chaos, especially in a time such as this,” she said. “Jesus has gradually softened and changed my heart as well as given me unexplainable courage to do things like lead my first small group. There’s no way that I could’ve changed or felt that way if it weren’t for God working within me.”

Both Erin and Alex look forward to being part of the core student leadership team for InterVarsity’s Multiethnic Fellowship at NYU next school year.

“Although there is much I miss about campus ministry before the pandemic, I am also grateful for the ways God has invited us to press into this season of unknowns,” Sarah said. “It has looked like small groups happening in the mornings now to make space for students joining us from vastly different time zones. It has sounded like seeking students sharing that they have started to reexplore faith and spend time in prayer for the first time in 10 years. It has felt like God inviting us into deeper dependence on him as we lay all the emotions of this present moment before him. Seeing Alex and Erin say yes to Jesus in the midst of a global pandemic has given me a glimpse of what it means to long for revival in such a season.”

In the midst of the COVID-19 pandemic, people are searching for answers and community. Eager to respond to this need, InterVarsity worked quickly to organize InterVarsity LIVE!, our first ever national online large group, in the aftermath of colleges closing for the semester.