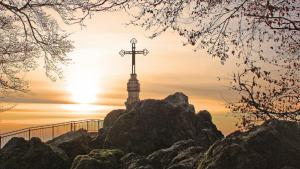 As we remember our Lord and Savior’s sacrifice this Easter, take some time to reflect on these passages and questions. Pray for fresh eyes and an ability to place yourself within each passage. Read them more than once to fully soak them in. And may the Holy Spirit fill us all with a renewed sense of wonder and delight as we celebrate the empty tomb!

It was just before the Passover Festival. Jesus knew that the hour had come for him to leave this world and go to the Father. Having loved his own who were in the world, he loved them to the end.

The evening meal was in progress, and the devil had already prompted Judas, the son of Simon Iscariot, to betray Jesus. Jesus knew that the Father had put all things under his power, and that he had come from God and was returning to God; so he got up from the meal, took off his outer clothing, and wrapped a towel around his waist. After that, he poured water into a basin and began to wash his disciples’ feet, drying them with the towel that was wrapped around him.

He came to Simon Peter, who said to him, “Lord, are you going to wash my feet?”

Jesus replied, “You do not realize now what I am doing, but later you will understand.”

Jesus answered, “Unless I wash you, you have no part with me.”

“Then, Lord,” Simon Peter replied, “not just my feet but my hands and my head as well!”

Jesus answered, “Those who have had a bath need only to wash their feet; their whole body is clean. And you are clean, though not every one of you.” For he knew who was going to betray him, and that was why he said not every one was clean.

When he had finished washing their feet, he put on his clothes and returned to his place. “Do you understand what I have done for you?” he asked them. “You call me ‘Teacher’ and ‘Lord,’ and rightly so, for that is what I am. Now that I, your Lord and Teacher, have washed your feet, you also should wash one another’s feet. I have set you an example that you should do as I have done for you. Very truly I tell you, no servant is greater than his master, nor is a messenger greater than the one who sent him. Now that you know these things, you will be blessed if you do them.

1. Picture yourself with the disciples as Jesus washes your feet. What do you feel? Are there places in your life where Jesus’ humility and service make you uncomfortable? Press into these emotions and pray through them with the Lord.

2. Jesus tells the disciples, “You are clean.” What do you think he means? What implications does that have for you?

3. Jesus calls us to wash one another’s feet. What does this look like in today’s culture? How can you do this for someone else today?

Two rebels were crucified with him, one on his right and one on his left. Those who passed by hurled insults at him, shaking their heads and saying, “You who are going to destroy the temple and build it in three days, save yourself! Come down from the cross, if you are the Son of God!” In the same way the chief priests, the teachers of the law and the elders mocked him. “He saved others,” they said, “but he can’t save himself! He’s the king of Israel! Let him come down now from the cross, and we will believe in him. He trusts in God. Let God rescue him now if he wants him, for he said, ‘I am the Son of God.’” In the same way the rebels who were crucified with him also heaped insults on him.

When some of those standing there heard this, they said, “He’s calling Elijah.”

Immediately one of them ran and got a sponge. He filled it with wine vinegar, put it on a staff, and offered it to Jesus to drink. The rest said, “Now leave him alone. Let’s see if Elijah comes to save him.”

And when Jesus had cried out again in a loud voice, he gave up his spirit.

1. Place yourself in this scene. Where would you be? What kind of things would you see and hear? What would be running through your mind?

2. Imagine what Jesus was thinking and feeling as people hurled insults at him. How does his reaction set an example for us?

Early on the first day of the week, while it was still dark, Mary Magdalene went to the tomb and saw that the stone had been removed from the entrance. So she came running to Simon Peter and the other disciple, the one Jesus loved, and said, “They have taken the Lord out of the tomb, and we don’t know where they have put him!”

So Peter and the other disciple started for the tomb. Both were running, but the other disciple outran Peter and reached the tomb first. He bent over and looked in at the strips of linen lying there but did not go in. Then Simon Peter came along behind him and went straight into the tomb. He saw the strips of linen lying there, as well as the cloth that had been wrapped around Jesus’ head. The cloth was still lying in its place, separate from the linen. Finally the other disciple, who had reached the tomb first, also went inside. He saw and believed. (They still did not understand from Scripture that Jesus had to rise from the dead.) Then the disciples went back to where they were staying.

Now Mary stood outside the tomb crying. As she wept, she bent over to look into the tomb and saw two angels in white, seated where Jesus’ body had been, one at the head and the other at the foot.

They asked her, “Woman, why are you crying?”

“They have taken my Lord away,” she said, “and I don’t know where they have put him.” At this, she turned around and saw Jesus standing there, but she did not realize that it was Jesus.

He asked her, “Woman, why are you crying? Who is it you are looking for?”

Thinking he was the gardener, she said, “Sir, if you have carried him away, tell me where you have put him, and I will get him.”

She turned toward him and cried out in Aramaic, “Rabboni!” (which means “Teacher”).

Jesus said, “Do not hold on to me, for I have not yet ascended to the Father. Go instead to my brothers and tell them, ‘I am ascending to my Father and your Father, to my God and your God.’”

1. Again, try placing yourself in this scene. Who do you resonate with the most? What kind of thoughts and emotions would you be experiencing?

2. Focus in on the moment where Mary, weeping and confused and panicked, hears Jesus say her name. Imagine what’s going on in her heart. We know that Jesus will one day return. Take time to picture what that moment will be like, seeing Jesus face-to-face. Let Mary’s example guide you.

By Shawn Abraham
Selling Everything to Buy the Field

Just like the parable, EC “sold” what she had, so she could follow Jesus’s calling. She knew Jesus was the far greater treasure.

By Joy Zhou
I Prayed for 3 Friends Each Month: Here’s What I Learned

“When was the last time you prayed for your community? For your church? For your city? Are the only prayers you offer up to the Lord ones where you ask him to work in your own life?”