Selling Everything to Buy the Field | InterVarsity
Skip to main content

Selling Everything to Buy the Field 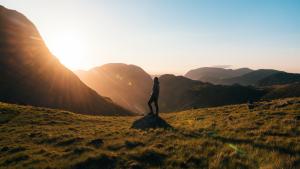 “Who’s at the center of your prayers?” I’ve started off with this question during most of my talks at Basileia, InterVarsity’s Spring Leadership Retreat for New York and New Jersey.

It’s an important thing to ask. We know that God should be at the center. But money, comfort, and safety too often take center stage in our prayers. While praying for these things isn’t necessarily wrong, our fixation on them reveals what we believe about God: that he’s not a good provider, the giver of peace, or all-powerful.

Matthew 13:44, one of my favorite parables, shows what happens when we do put God at the center. Here Jesus explained, “The kingdom of heaven is like treasure hidden in a field. When a man found it, he hid it again, and then in his joy went and sold all he had and bought that field.” I’ve always thought this is a beautiful illustration of people who weren’t followers of Jesus having life-transforming encounters with him.

Seeing students and faculty have those kinds of life-transforming encounters with Jesus is what we long for most at InterVarsity.

One of my favorite examples of this was with EC*, a student from Rutgers University–Newark (RU-N). EC is an incredibly intelligent and motivated woman who was on track to graduate early and already had an internship with New Jersey’s governor lined up after graduation! She also has a heart for helping people encounter Jesus. Throughout college, she studied Scripture with several different students, inviting them into deeper intimacy with God. She reached a point where she was studying Scripture with so many people that she had to merge them all into a Bible study because she couldn’t manage meeting with everyone separately!

This past spring, EC heard about Basileia and decided to invite her whole small group. On the second day, we talked about the ways that God was speaking to all of us. EC heard an invitation from him to stay an additional semester at RU-N—and give up her internship with the governor—so she could plant a witnessing community in a new corner of campus. She said yes!

But EC believed that a yes to Jesus was better than a yes to the governor. As she grew in her relationship with Jesus, EC came to see that God’s love and praise was greater than that of any person. She also knew that Jesus was the provider of all things, including opportunities and money, and could trust him with her future.

Just like the parable, EC “sold” what she had, so she could follow Jesus’ calling. She knew Jesus was the far greater treasure.

I wonder, though, if this parable about buying the field isn’t just about new followers of Jesus. What if it’s also for people who’ve been following Jesus for years?

In Luke 5, we meet Simon the fisherman for the first time. The story opens with Jesus giving Simon some fishing tips after a difficult night’s work. Simon listened and ended up catching so many fish that the nets began to break! He even needed help from other fishermen to bring in his catch. It was through this interaction that Simon, and a few other fishermen, saw Jesus’ power and providence and said yes to following Jesus. He gave up or “sold” everything he had because he realized Jesus was far more valuable than his career or his catch.

Three years later after Jesus had just died on the cross, Simon (now called Peter) had a similar interaction with Jesus in John 21. Peter and a few other disciples went back to fishing and once again struggled to catch anything. But then Jesus appeared and gave a few tips, and Peter couldn’t even haul in his massive catch.

The disciples immediately recognized him and rushed back to shore to have breakfast with him. Afterward, Jesus told Peter that he was going to die a pretty awful death and then invited Peter to follow him. Even though it’s not mentioned in this passage, Peter’s actions in Acts testify that he said yes to Jesus again, willing to “sell” his life because he knew Jesus, a man who rose from the dead, held far greater value than his own life!

God’s inviting us all into a life like Peter and EC. Saying yes to Jesus isn’t something we just do when we first follow him but something we’re constantly being invited into as we grow. And while God calls us to do some radical things, like giving up internships with governors and even our lives, he’s made it abundantly clear that he’s worth selling everything for.

God, would you open our eyes to see the truth of who you are? That you’re great, mighty, and worth every sacrifice. Would you reveal to us your glory so that we would say yes to you?!

By Shawn Abraham
Lamenting the Pandemic—Partnering with God through Prayer

In March 2020, I found myself living out the book of Lamentations. I watched firsthand as the City That Never Sleeps became the city with the most confirmed COVID-19 cases in the country.

By Carrie Carey
Church Membership—Not Perfect But Still Worth It!

But I believe, as a follower of Christ, that it is essential to be an intentional, active member of a church community. Membership facilitates opportunities for vulnerable relationships and accountability.

By Jason Gaboury
Living with a Death-Defying Hope

The Bible refers to death as a great enemy. In American culture, there are two ways we usually deal with death: denial and despair. But Scripture offers a different way.