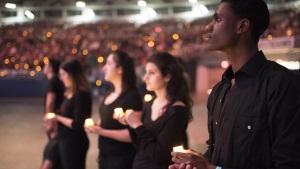 Dr. Martin Luther King Jr. was, without a doubt, a great leader.

But he was a great follower first.

He followed Jesus, whose death and resurrection brought about the most powerful and seemingly impossible reconciliation ever: reconciliation between perfect God and sinful man. And he believed Paul’s words in 2 Corinthians 5, even to the point of giving up his own life:

Reconciliation is the story of our faith. It is central to the heart of God. And it’s part of our calling as followers of Jesus.

It’s also the first step toward bringing racial justice and racial equity. It can be tempting to skip over reconciliation; after all, it’s messy, inefficient, time-consuming. We’d rather get on to the real work of fighting for justice. But, as InterVarsity’s New York City Urban Project Director Jonathan Walton explained in his Urbana 15 seminar, “We have to practice racial reconciliation in order to pursue racial justice.”

In other words, we can never bring justice for “them” if we’re not willing for “them” to become “us.”

But what does this look like practically? How do we follow in King’s footsteps and, even more, follow Jesus obediently into the work of reconciliation? The following resources from InterVarsity Press can help us take the first step.

The Heart of Racial Justice: How Soul Change Leads to Social Change: Ultimately, reconciliation is a heart matter. So that’s where coauthors Brenda Salter McNeil, a Black author and long-time consultant in reconciliation, and Rick Richardson, a White Anglican priest and evangelist, start. They point us toward the spiritual weapons we need—weapons like prayer, repentance, and forgiveness—to see God’s victory come in the spiritual battle against racism and hatred.

Roadmap to Reconciliation: Moving Communities into Unity, Wholeness and Justice: In Brenda Salter McNeil’s newest release, she gives us a step-by-step guide to reconciliation, serving as coach, mentor, and prophet along a journey she herself has been committed to for years. Each chapter includes reflection questions and exercises to help us apply the principles to our specific contexts.

Being White: Finding Our Place in a Multiethnic World: Guilt and shame over the past and a fear of saying the wrong thing in the present can keep many White people from ever starting out on the path of racial reconciliation. In these pages, authors Paula Harris and Doug Schaupp offer truth, grace, and practical advice from their own experiences that can move White people out of their paralysis and into their calling as reconcilers for Jesus.

Living in Color: Embracing God’s Passion for Ethnic Diversity: Randy Woodley, a Keetowah Cherokee, provides a full-orbed look at God’s intentional creation of diverse peoples and his love for all nations. Sharing wisdom from his Native background, he also offers practical, accessible, hopeful steps that set us on a path toward becoming people whose own hearts desire the unity-in-diversity that God intended for our good and his glory in the first place.

Where the Cross Meets the Street: What Happens to the Neighborhood When God Is at the Center: The Christian Community Development Association (CCDA), started by prophet and reconciler John Perkins in 1989, has been a leader in training individuals and churches in the theory and practice of reconciliation. This recent release from CCDA CEO Noel Castellanos is an invaluable guide for Christians who are ready to be active participants in God’s reconciling, redeeming, restoring work in their own communities.