On Food, Being Filipino & the Hospitality of God | InterVarsity
Skip to main content

On Food, Being Filipino & the Hospitality of God 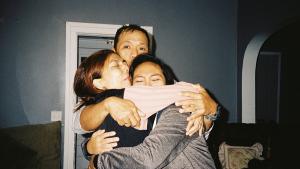 For the longest time, I didn’t know what being Filipino meant to me.

I was 18 when my mom landed a job as a nurse in Whitewater, Wisconsin — a college town of about 14,000 people. My family and I were living in Manila at the time in a bustling urban city of almost half a million people. We called it home. And then, after 12 years of processing our immigration papers to go to America, we had the chance to leave.

We packed our entire lives into two suitcases and arrived at O’Hare in March 2019. It was cold and cloudy. All I saw on the ride to Wisconsin was sprawling corn fields and an alarming number of dead raccoons on the side of the road. It didn’t have the warm, embracing heat of the Philippines. It didn’t have its welcoming people. Within me, I desired the familiarity of home. I was a stranger in a strange land.

But God’s hospitality met my sister and me by surprise at a farmer’s market in downtown Whitewater. We were eating pad thai and spring rolls when two strangers approached us after recognizing the Filipino language. The friendly conversation ended with them offering to give us a ride to church on Sunday, where I heard an InterVarsity campus minister share her testimony. I walked up to her after the service, and she connected me with the leaders of the Asian American InterVarsity (AAIV) life group at my school, the University of Wisconsin-Whitewater.

I went to the life group scared. I never had to wrestle with my identity as a Filipino until I immigrated. Back home, I was Filipino only because I was born in the Philippines, was a Filipino citizen, and spoke Filipino like everyone around me. Because of this, I didn’t question the fact that I ate rice three times a day seven days a week and never called older people by their first name. These were things I accepted without question.

But since coming to America, being Filipino has informed how I go about immersing myself into this new culture. It was bizarre to find out that eating rice was a rare occurrence for my friends, and that it was okay to call my professors “Sharri” and “Tanya.” In this mental dissonance, I’m grateful that AAIV gave me the room to grapple with questions of racial and ethnic identity. Most importantly, it also gave me the space to explore and embrace the ways in which my racial and ethnic identity are a blessing from God.

In the Philippines, it’s not unusual to feed and welcome guests even when they aren’t invited to the party. It’s not uncommon for Filipino gatherings to have an abundance of food for everyone to have thirds. Because of this, being Filipino has shaped my understanding of Christ. He’s a hospitable God — ready and waiting for people to come to the table. He’s an abundant and generous God who gives every good and perfect gift. In the Parable of the Great Banquet (Lk 14:15-24), God invites everyone to eat of the feast. He calls those marginalized in society to partake in the food he has prepared. He calls the stranger his friend.

This act of kindness took on a new meaning when I understood it in the context of being Filipino, where food means more than just sustenance and is central to fellowship. I began to see God as the God who not only fed and provided for me, but also as the God who welcomed me — even when home felt so far away. In my life group leader’s apartment, it felt like Christ had stepped into my heart through the people who were there, through the friends who saw me in both my sorrow and joy and still remained. It was here that I realized I wasn’t a stranger anymore. I was fully known and fully loved.

Even on the other side of the world, I feel as though I’m brought back home by the different iterations of hospitality — from my family, my friends, and my Filipino heritage — and how all of them flow from the hospitable God who has welcomed us all to partake in his kingdom.

Hannah Keziah Agustin is a Social Media Coordinator/Writer at InterVarsity’s Editorial Team in Madison, Wisconsin. You can support her ministry at givetoiv.org/hannah-keziah-agustin.

Have you ever thought about what the word “blessing” really means? It’s said all the time in Christian circles. And it kinda make sense. But at the same time, it feels like something’s missing . . .

By Kerrington Maner
The Good, The Bad, The Ugly: A 2021 Graduate’s Reflections

As much as I cherished the moment, I wish I had known that it would be the last football game I’d ever attend as a student. Actually, there were a lot of “lasts” that came sooner than I expected.