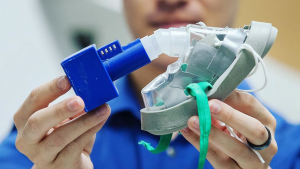 “Hey, so the Department of Surgery Chairman is wondering if you can make a COVID-19 mask?”

Joshua Kim perked up as he read the email from a doctor at the Medical University of South Carolina, where he worked as a Senior Designer and Program Coordinator. The request was understandable. As the coronavirus pandemic swept the nation, masks—practically anything that would fit on a person’s face—were in high demand and short supply.

Joshua had been working from home since March and deeply missed the hands-on part of his job: the feel of tools in his hand, the smell of a saw cutting through plastic. He needed to build something.

He had always been a maker, a tinkerer—someone whose idea of fun was crafting replica Iron Man suits and Mandalorian armor for his cosplay hobby. As a biology student at Northwestern University in Illinois and a member of the Asian American InterVarsity (AAIV) chapter, he had designed a device to help stroke patients relearn how to walk.

It was there, in that InterVarsity community, where Joshua (a 2017 alumnus) began to understand the power of Christlike service: first through his small group leader’s example who cared for freshmen like Joshua, taking time out of her day to meet for meals and ask how they were doing, and then later by using his technical and design skills to connect his AAIV large group more effectively with the Northwestern community.

As Joshua looked over the doctor’s email again, he glanced over to the pile of tools and materials on the work bench behind his desk. He had gathered them a few days earlier, hoping that a project might reveal itself. Make a mask? he thought. With any of this stuff? Impossible.

He emailed the doctor: “I don’t think so. I don’t think there are [any designs] out there that could substitute N95 masks.”

For a moment, his eyes drifted to his work bench again and then to the 3D printer in the corner. Joshua could almost feel tumblers and gears starting to click into place in his mind. Don’t air conditioners filter out allergens that aren’t much larger than viruses? What if you could put small generic air conditioner filters into some kind of 3D printed mask?

Joshua raced to the hardware store and brought home five different filters. He cut them up, molded a small housing cartridge unit from scrap plastic, and installed a one-way valve. This idea can work. Joshua felt it with a craftsman’s intuition sharpened by years of tinkering. But he still felt a sliver of doubt: air conditioner filters need a strong air flow to pull air through. Would human lungs do the trick? He clicked the cartridge into a spare oxygen mask, pulled it over his mouth, and took a deep breath. A strong draft of cool, clean air slid through.

Fifteen hours later, Joshua rushed to his campus lab with a prototype in hand. His team had already been working on 3D printing for other projects, and they pivoted quickly to help design a hard-shell 3D printed mask. For Joshua, it was a beautiful example of the kind of collaboration that got him excited about design.

“It was really fun,” he said. “Everyone knew what they had to do. It felt like a true design task force in this high-pressure scenario. We knew that we had a product that people needed, and this was our way of contributing to the fight against COVID-19.”

Four days later, after several rounds of testing and designing, Joshua held a functioning, working prototype in his hand. In the span of one week, Joshua’s invention was ready to go public.

“This was the first time where I felt like something I worked on could be implemented in a public setting.  I was in disbelief that it happened,” Joshua said.  “Most of our projects are school projects. You give them to the company once you’re done with them, and you might not ever hear about it again. But this was the first time I was able to take an idea from ‘ideation phase,’ bring it to life, and then distribute it to people who actually need it.”

The global need for masks was dire, and the response to Joshua’s mask design was immediate—within two weeks, it generated national and international interest The Air Force and Navy contracted to use Joshua’s prototype as did people from all over the world, in countries like Turkey, the UK, Canada, and Ireland.

“We had local colleges and high schools jumping on board to make their own masks. People were buying 3D printers and printing them out there,” Joshua said. “We wanted to get this out to as many hands as possible. We were telling anyone in the local community who asked, ‘If you know anyone else who needs this, please feel free to give it to them.’”

This opportunity to help others has connected Joshua’s dreams for what product design could be, shaped by his heart for Christlike service. “It’s been a ride I’ll never forget,” he said. “I got to essentially live out what I’ve always dreamed about doing, which is to use my creative talents and passion to serve others in a productive, tangible way.”

By Ona Strikas
Glorifying God in Every Vocation

InterVarsity is very good at getting college students out of their conventional Sunday-school comfort zone. It is very good at calling us to “pick up our cross daily and follow him,” and to radically love the forgotten and downtrodden that Christ cared so much for.

God’s invites us to not only join him in the suffering around us; he is also inviting us to explore our own personal disappointments and losses on a deeper level. This difficult time can be an opportunity to cultivate newness.