InterVarsity in the NBA 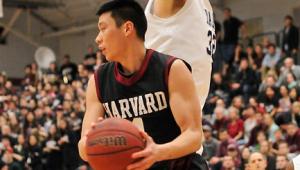 Last Saturday Jeremy Lin was an unknown, sitting at the end of the Knicks bench in Madison Square Garden and wondering if his dream of playing in the NBA was about to evaporate like a mist. He had been released by his hometown Golden State Warriors, picked up and released by the Houston Rockets, and then picked up by the Knicks, who had sent him to their D-League team in Erie, PA, for a couple of weeks.

But desperate men do desperate things. Coach Mike D’Antoni, faced with a growing injury list and 11 losses in the past 13 games, took a chance on the new kid. What he got was a Susan Boyle moment, a totally unexpected flawless performance from an unauspicious but talented and dedicated performer. Jeremy Lin scored 25 points off the bench on Saturday, and 28 points the following Monday when he became a starter for the first time in his professional career. Wednesday he added 23 more.

Nobody knows what will happen next. The Knicks are preparing to face the Lakers and Kobe Bryant tonight and the rest of the NBA season after that. Former Knicks coach Jeff Van Gundy thinks Jeremy has what it takes to flourish in the NBA: “Lin is deceptively athletic, and he knows when to pass and when to shoot. That seems simple enough, but it’s not.”

In the meantime “Linsanity” has broken out in the Big Apple and beyond. The New York Times, the New York Post, the New York Daily News, and various other media from New York to Singapore are all over the story of an Asian American phenom in the NBA. He has his own rap on YouTube, actually two raps on YouTube, so far.

A year ago we called Jeremy InterVarsity’s NBA Rookie of the Year, although he had limited playing minutes with the Warriors.  Two years ago we featured an interview with Jeremy on our StudentSoul website, talking about how his involvement with InterVarsity nurtured his faith as a student at Harvard.  So this year we’re cheering him on and praying that amidst all of the hoopla Jeremy will stay anchored in his faith.

Some media in the U.S. and abroad have made a connection between Jeremy Lin and Denver Broncos quarterback Tim Tebow. Both seem to have generated a new word: “Tebowing” and “Linsanity.” Both are willing to freely talk about their Christian faith, when given the opportunity. But as one writer pointed out, Tebow was drafted in the NFL’s first round, Jeremy was undrafted.

Jeremy Lin has a different story than Tim Tebow; it comes from excelling in a field where expectations are extremely low for Asian Americans. Former sportswriter Brian Chu has reflected on how Jeremy was a personal inspiration. Timothy Dalrymple has written about Jeremy and the soft bigotry of low expectations (171 comments so far).

We hope that Jeremy has a long and illustrious career in the NBA. It seems much more possible today than it did a week ago. Watching how he has handled the ups and downs of his basketball career, we are reminded of the words of the Apostle Paul, who wrote to the Colossians, “Whatever you are doing put your whole heart into it, as if you were doing it for the Lord and not for men.”

UPDATE, FEBRUARY 11, 2012: The Knicks beat the Lakers last night, 92-85, and Jeremy Lin scored 38 points. The excitement continues, and along with it more stories about Jeremy Lin's Christian faith. This story by Michael Luo may be one of the first New York Times stories that links to InterVarsity's website.

Fantastic post. Jeremy Lin's nonchalant witness might be contagious, because several of his Knicks teammates have been increasingly open about their faith recently -- see Landry Fields' Twitter! Jeremy gained 115,000 Twitter followers this past week, and his excellence on the court is the real deal: 24 NBA teams played Friday night, and Jeremy was the highest scorer of them all with 38 points.

And to find a video of his

And to find a video of his testimony and explaining how his faith helps him to endure the pressures of playing such a high-profile sport as the NBA is Linspiring too! I posted it at http://u.djchuang.com/AEZVvp

God is Good... that we have

I'm happy to know that he is

I'm happy to know that he is a Christian and IVCF as well. May he continue to be a living testimony for God....proud to be an IVCF!!!

Great post. Jeremy Lin is a class act on and off the floor.