“The Mark Drama” and the Powerful Intersection of Faith and Art 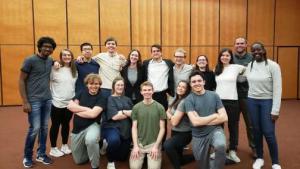 On a Monday evening last April, I walked into a small church building to watch a play depicting the Gospel of Mark performed by a group of mostly amateur student actors. I knew just a little bit about “The Mark Drama.” It was a minimalistic approach to telling this gospel story without costumes, props, or set design.

In a chapel room, InterVarsity students from the University of Wisconsin-Madison set up chairs in a circle for the audience, leaving just a small space at the center for the “stage” ala theatre-in-the-round.

John Florey, a Campus Staff Minister from South Dakota and one of the four Directors of “The Mark Drama,” spent the previous weekend working with these students to get them ready for showtime. Before the play began, I sat analyzing the space, wondering how a group of students, with only 13 hours of practice, could tell the most important story of all time and tell it well.

What followed was one of the most powerful demonstrations of Jesus’ life, death, and resurrection that I’d ever witnessed. After the play, I had the opportunity to speak to some of the actors about their experience. 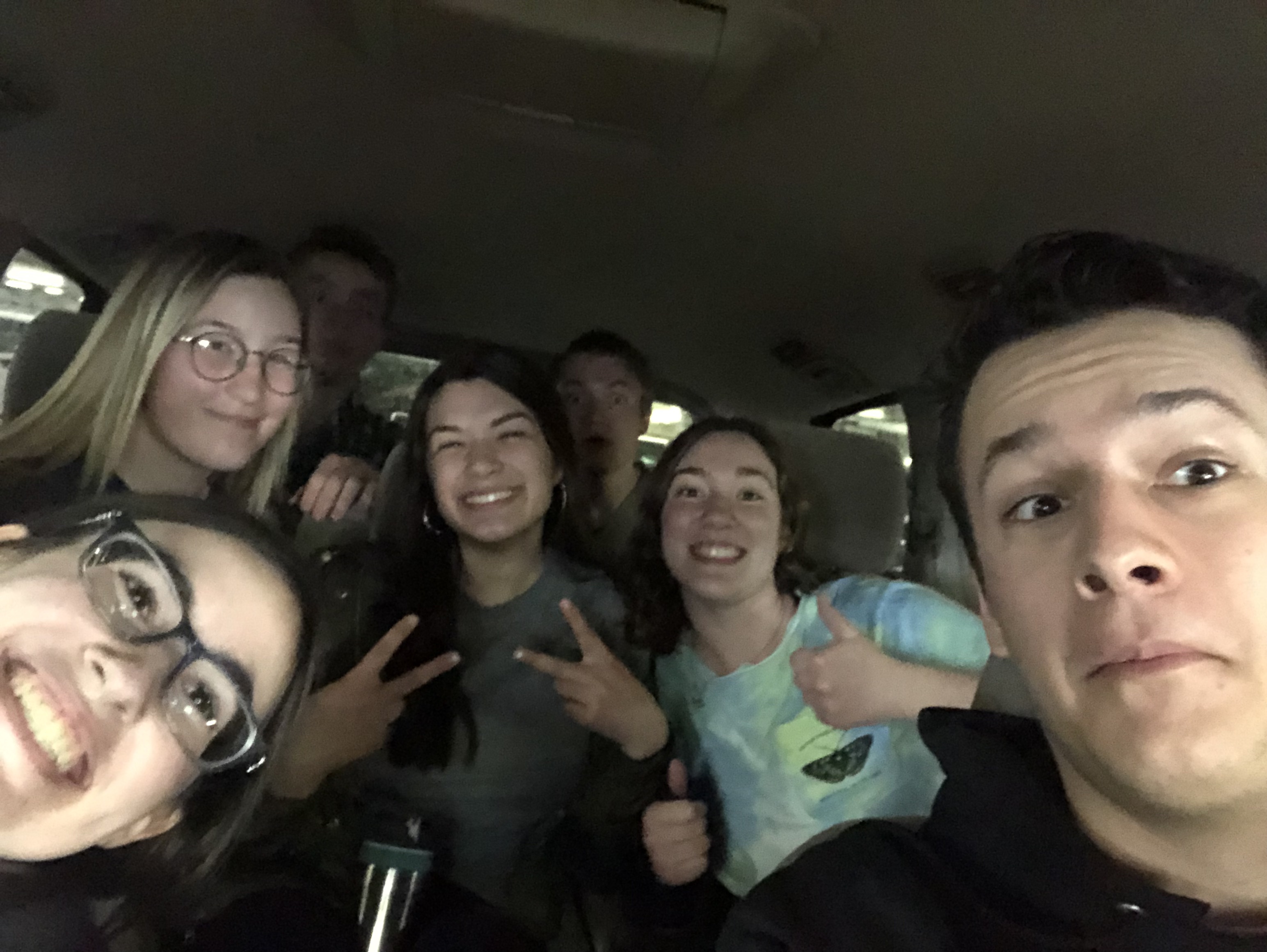 When I sat down with these students, I learned a little about what drew them to “The Mark Drama” in the first place. I imagined that each of them had a long-standing passion for acting and that all their lives, they’d been waiting for an opportunity to combine their faith with theatre. But that wasn’t the case. In fact, only one student — Rachel who played James — had a background in performing arts. The rest of the actors hesitated to be part of this project.

“I thought it was going to be a play that no one would see,” said Zeke, who played the role of John the disciple.

Initially, only five students signed up to be in “The Mark Drama.” Eventually, though, 15 were on board. Rehearsals just started four days before their first performance. Caleb, who played Jesus and began preparing for the role six weeks in advance, was one exception.

To say the actors’ rehearsal weekend was memorable would be an understatement. At moments it was pure fun and silliness. Rachel/James and Zeke/John often riffed on their nickname of “sons of thunder” to much welcomed comedic relief.

Other moments, though, were challenging and even spiritually demanding, like the first rehearsal of the Garden of Gethsemane. Being one of the hardest and most important scenes in the play, Caleb/Jesus knew he had to nail it. John Florey intentionally gave the rest of the cast very little direction. But as Caleb pretended to weep the way he imagined Jesus did in that garden 2,000 years ago, everyone else joined him with real, raw emotion. 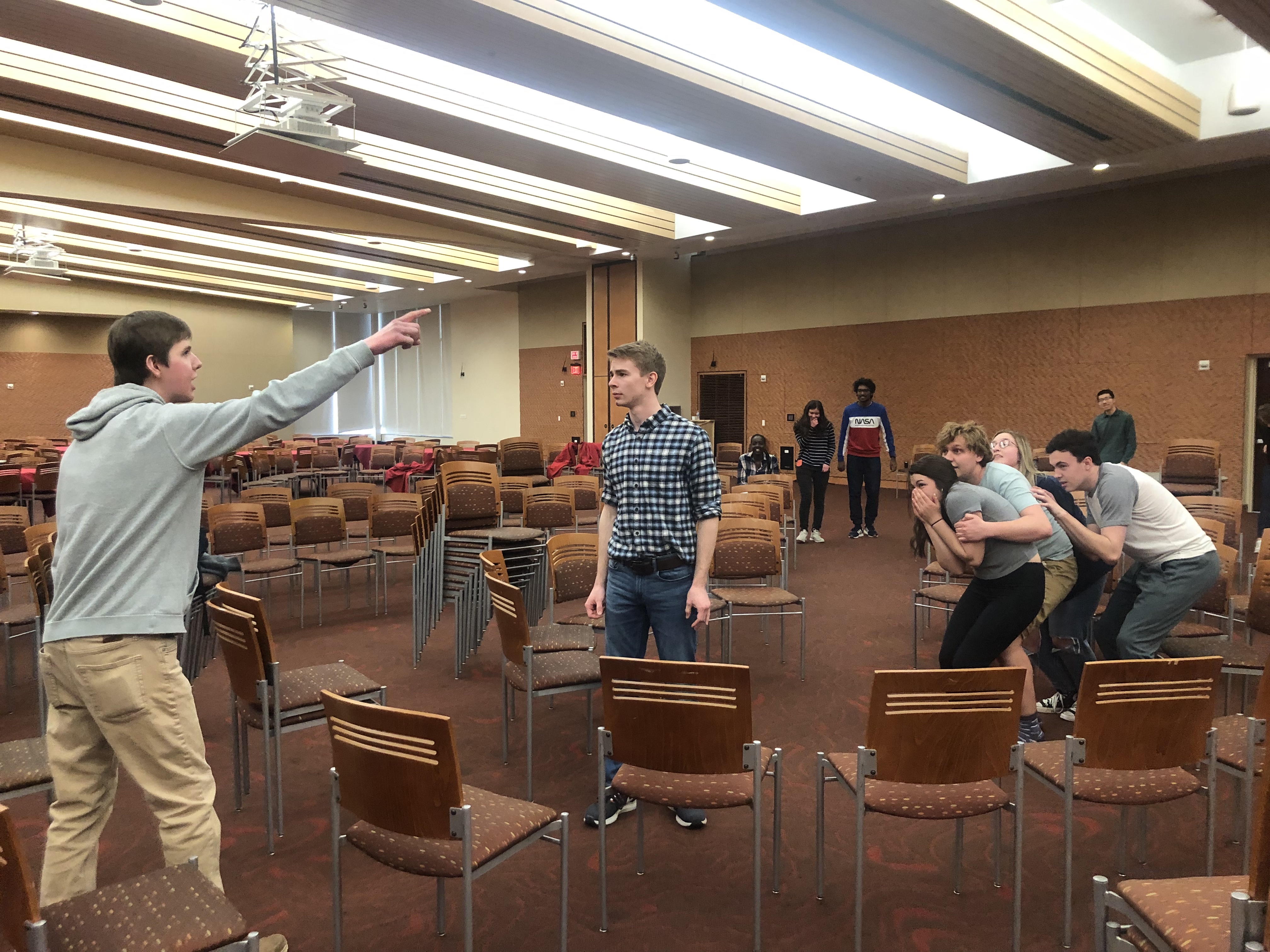 Soon after, the cast rehearsed Jesus’ betrayal scene, and John directed everyone to shout things like “Crucify him!” and “Kill him!”

“That part’s never fun,” John said. “Everyone was falling apart. I told them to take some time to collect their feelings.”

That recovery time bled into dinner that evening, where John had everyone share what God was doing in their hearts. As they opened up, he realized something truly special was happening.

“That sharing time was one of the most beautiful times I’ve had on staff,” John said. “Students were pouring out their hearts, convicted of sin, overwhelmed by the Lord’s love for us.”

He encouraged the students to keep pushing forward, to take comfort in knowing that Jesus’ grief and crucifixion is not the end of the story. Everyone was reminded (even realizing for the first time), of the importance of this play.

I have a not-so-interesting confession. I, like a lot of people, have a hard time staying completely focused on something for an extended period of time. I assumed my mind would wander as I sat waiting for “The Mark Drama” to begin.

But as soon as the first words of Mark were spoken in that church, my attention was cemented for the next 90 minutes.

The theatre-in-the-round approach was engaging enough to keep me hanging on every word. We watched actors as they walked through the audience or found creative ways of depicting more elaborate scenes like the feeding of the 5,000 or Jesus’ story about the seven brothers. It was entertaining, immersive, and at times fun. 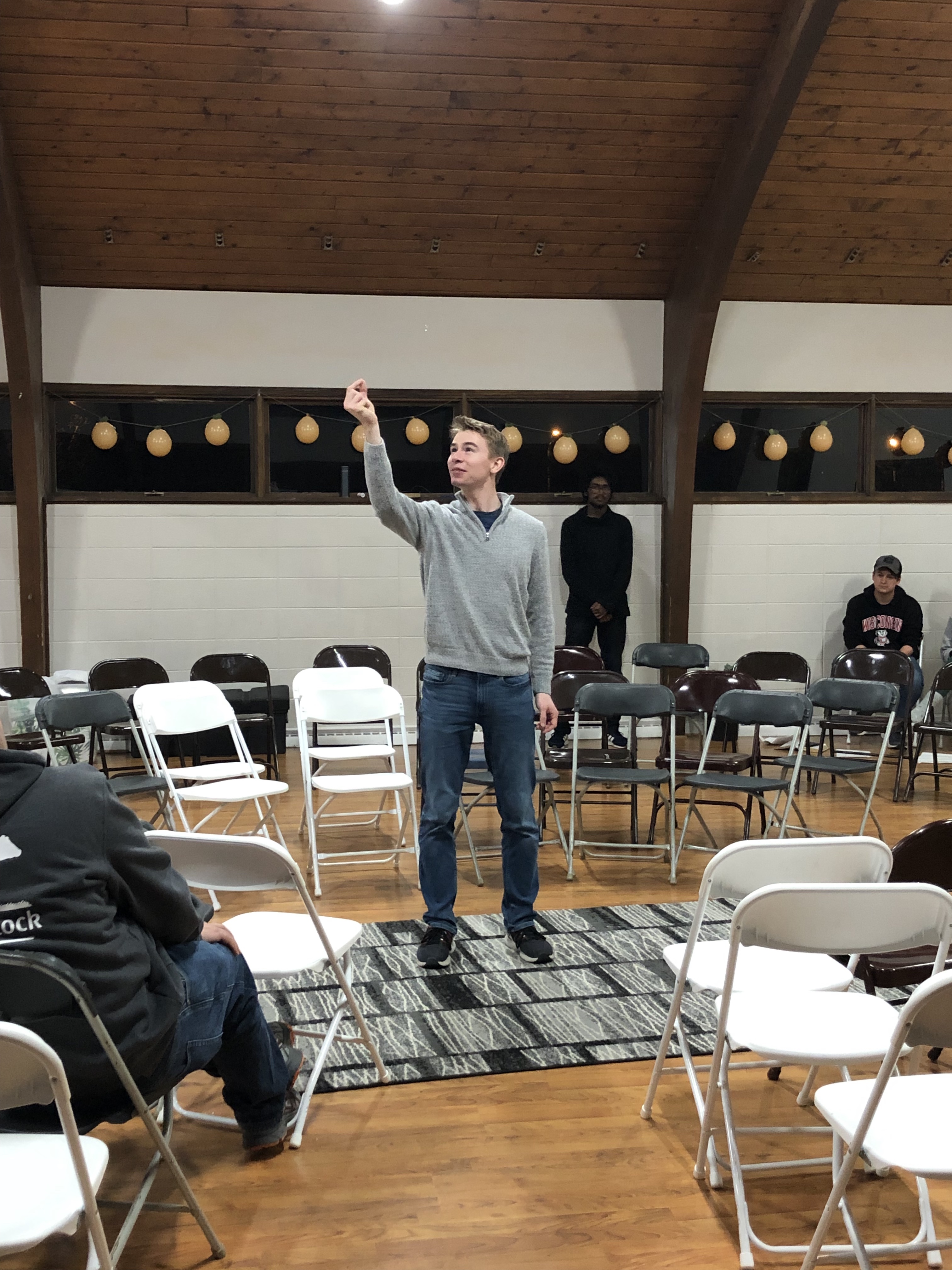 I don’t want to give too much away — because I think everyone should experience “The Mark Drama” for themselves — but I will say that one of my favorite scenes was when Jesus calmed the storm. Actors executed this scene perfectly by making as much noise as possible, clapping loudly on tables until Caleb/Jesus silenced the chaos. The room froze, and I sensed that everyone in it was as impressed as I was.

And of course, Jesus’s arrest and crucifixion was heartbreaking. We watched Peter deny him, Judas betray him, and the entire cast (including those Jesus mentored, healed, and loved for the past 90 minutes) turn on him. We knew it was coming, but somehow it felt new and overwhelming.

“I’d like to think that unlike Peter, I’d never deny Jesus during a time of trial. It made me question how authentically I live out my faith. Even the strongest Christian struggles,” said Josh, who played Peter.

“This made me wonder about how often I hate Jesus through my actions. I love him, but I sin against him,” Zeke explained.

“It was a really good experience for me spiritually,” said Daniel, who played various roles including King Herod. 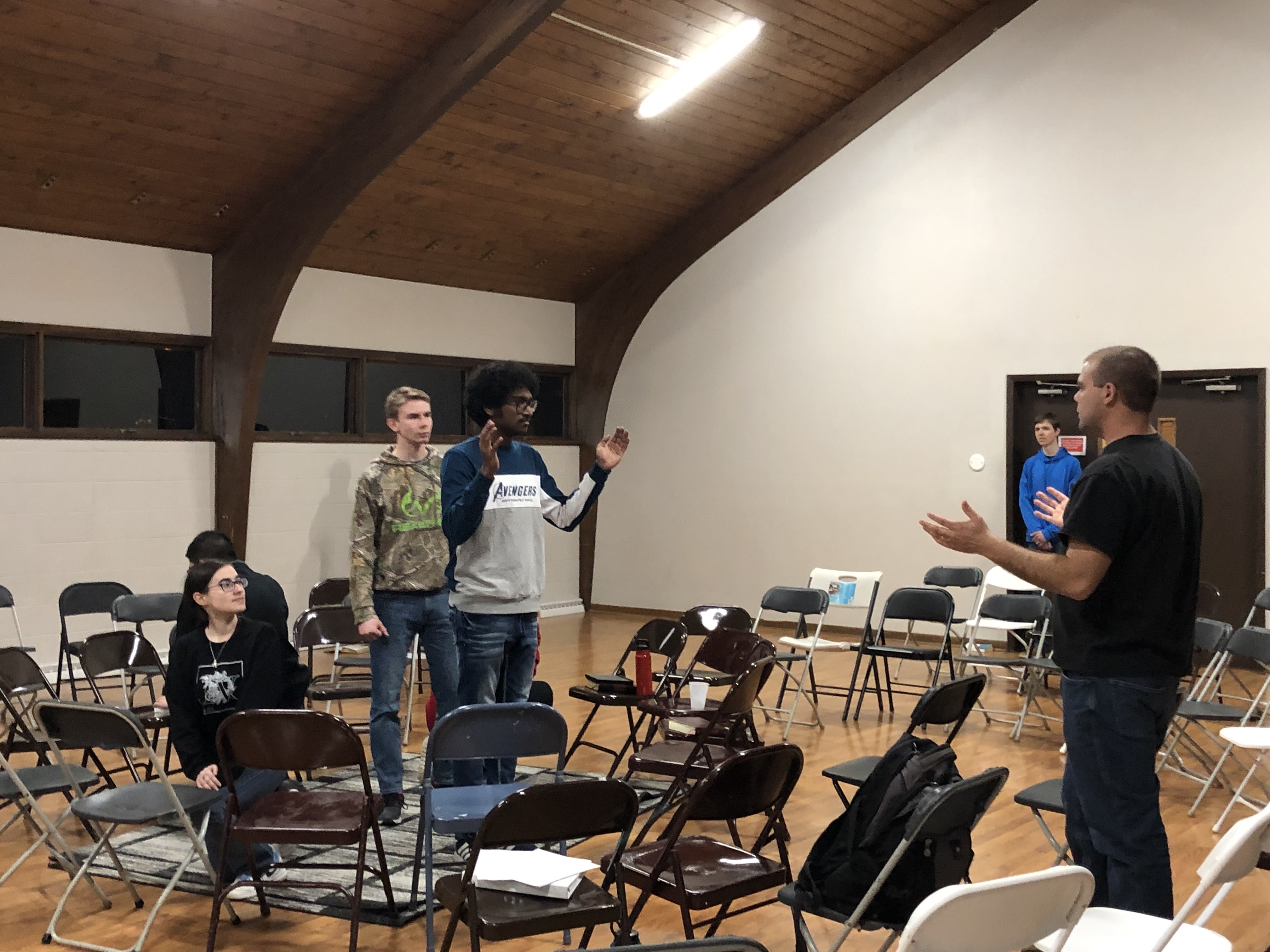 For Caleb, the six weeks of preparation combined with the heavy burden of portraying Jesus, left him feeling lonely at times. But he knows all the hours and emotions he poured into it were worth it.

“How often do you get to show hundreds of people the story of Jesus in an intimate way?” he said.

Rachel was thrilled to discover that using one of her passions to do outreach was not only possible but also incredibly effective. For other students, this play was an opportunity to try something new and gave each of them a deeper understanding of the gospel.

This, of course, was John’s hope. He’s traveled throughout the Midwest introducing InterVarsity chapters to “The Mark Drama” and then taking on his own role in the play: director, spiritual mentor, and coach.

John wants to see the play expand all over the country and touch many lives: actors and audience members, students and the campus, Christians and non-Christians alike. And so far, it’s done exactly that. In the past few months alone, 889 people have seen “The Mark Drama.”

Everyone has something to gain from being a part of this project. Actors not only grow in their personal faith but also in their evangelistic skills. Josh noted that it was challenging getting some of his non-Christian friends to come to an InterVarsity event. But several of them were excited to attend a play where their friend was performing. Others shared stories of friends who never showed interest in Jesus, but one viewing of “The Mark Drama” sparked genuine curiosity. 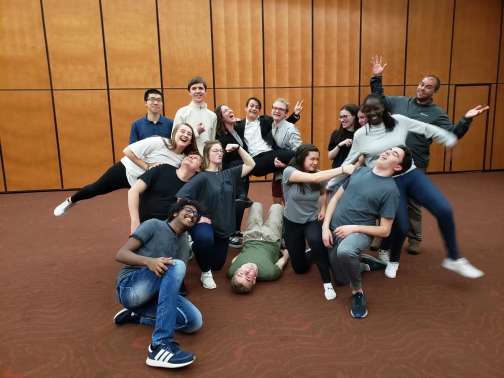 When I sat with this community of students, I could sense the joy and closeness they felt with each other. The 13 hours of intense rehearsal helped them deeply bond, and I felt sure that the challenges, laughter, growth, and collaboration it took to put on this play would stay with them forever.

This sounds amazing. I

This sounds amazing. I really wish I could have been involved in a play like this when i was in InterVarsity back in college rather than the one I did participate in. Kudos to all the participants for being humble and willing to do something like this.

Hope we can see the Mark

Hope we can see the Mark Drama in Atlantic Beach FL at our church.