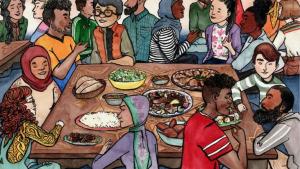 Amid so many divisions and uncertainties in this season, a group of students have been regularly gathering for a single purpose: peace.

Before the pandemic, InterVarsity’s International Student Ministry (ISM) launched Peace Feasts in chapters across the country, gathering Muslim and Christian students for meals and faith discussions around key topics, like justice and suffering. And when everything went virtual, ISM quickly adjusted to hosting monthly video calls with discussions at the intersection of faith and current events.

The popularity of these events grew throughout the pandemic with even one student living in the Arab Peninsula joining after seeing a social media post. She was able to connect with a number of students at the school in the US she was about to attend the next semester.

“They exchanged contact info, and so before she even moved to the States, she got connected with a group of Christians, who were building peaceful friendships with Muslims on campus!” said Rachael Johnson, an InterVarsity campus minister.

Having attended several Peace Feasts herself and excited by the fruitful conversations and connections she witnessed, Rachael hosted a Peace Feast of her own in April of 2021 focused on the topic of fasting, aligning with Ramadan and the season of Lent.

Muslim students were able to share more about Ramadan fasting practices. One of them described how this proved to be a reminder to care for those struggling with food insecurity. “Fasting is a way we draw closer to God. Fasting not just from food but anything that injures our souls,” another student said.

Christian students were also able to talk about their own experiences with fasting. One of them shared how fasting helped her focus on hearing God’s voice about an important decision.

Rachael’s experiences with the different Peace Feasts have deeply moved her and increased her level of respect for her Muslim neighbors. “I’ve loved the depth of the dialogue as we share about our faiths and being people of faith in a fairly secular society,” she said. “I’ve been surprised at all of the bridges and parallels I see in our respective holy beliefs.”

Rachael attended a local Muslim prayer gathering for Eid al-Fitr, which occurs at the end of Ramadan and is a time for ending the fast in celebration. However, the imam (similar to a local pastor) shared how this was a moment to pursue reconciliation with family and coworkers, reminding Rachael of Jesus’ words in Matthew 5. “I just realize that we have so much more common ground to start with than arguments or division,” she said.

She encourages fellow Christians to pursue these intentional kinds of friendships with Muslims. “I think it begins with asking God to open up our eyes to see our Muslim neighbors around us and being people of peace,” she said. Then doing something as simple as sharing a meal can start building friendships and stronger communities. This can lead to more opportunities for prayer, spiritual conversations, and Bible studies, where Christians can share more about their faith in Jesus.

Reflecting on her overall experience with Peace Feasts, Rachael said, “This community was forming, and friendships are going deeper between Muslims and Christians. Even oddly, you know, in this year of great separation. … It exceeded what I was hoping for and surprised me in a good way during a fairly disappointing year.”

As we continue through this Ramadan and Lent season, join us in asking God to help Christian students build friendships with Muslim students and that even more people may encounter the real hope of Jesus. If you’d like to learn more about Peace Feasts, click here!

This is so encouraging to

This is so encouraging to hear that something good came out of “virtual” season!

The point is that you’ll inevitably hit some speed bumps in your first year of college, and I want to offer you these lessons to help get you through.

God gets there first. He’s at work before we ever arrive on the scene. And that makes us, Christian witnesses, detectives and investigators of sorts.

By Tom Lin
Finding Peace in a Time of Conflict

As we approach Holy Week, Christ’s death and resurrection reminds me that he has given us access to his abiding peace, to the hope of eternal life, and to victory over sin and death. But how are we to live into this?