Reimagining Perseverance in a Pandemic | InterVarsity
Skip to main content

Reimagining Perseverance in a Pandemic 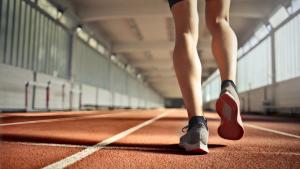 Sweat dripped into my clothes as I gasped for air. When my mom first told teenage me we were going to try out a Saturday fencing program, I imagined the thrill of a fight, beating my opponent with a blade, glory beaming from my face—not a lung-burning workout.

My nerves were on fire, and I couldn’t think much except to somehow endure the current round of push-ups. “NOW WE’RE DOING PLANKS FOR ONE MINUTE,” roared our coach as he crouched into plank position. “AND EVERY TIME SOMEONE DROPS, WE START OVER. PUSH THROUGH IT. READY. GO!”

After enduring several restarts, we finally got through it—all 150 middle schoolers and teenagers. “NOW FOR MOUNTAIN CLIMBERS!” Collective moans filled the sweaty air. I didn’t know if I could endure much more.

Endurance, or perseverance, is a weird word. It’s a virtue that suggests something awful either has happened or is happening. Think of the phrases “This time is different” or “Made with real chicken.”

Bearing the Marks of Perseverance

Dr. Bessel van der Kolk’s bestseller The Body Keeps the Score tells how the threat of trauma not only affects our minds but our bodies as well. He explains how simple smells, sights, and sounds can be enough to trigger hives or hamper our ability to focus, whether we consciously recall such trauma or not.

Consider it pure joy, my brothers and sisters, whenever you face trials of many kinds, because you know that the testing of your faith produces perseverance. Let perseverance finish its work so that you may be mature and complete, not lacking anything. (Jas 1:2–4)

And the author of Hebrews adds

It is for discipline that you have to endure . . . For the moment all discipline seems painful rather than pleasant, but later it yields the peaceful fruit of righteousness to those who have been trained by it. (Heb 12:7,11)

Perseverance, like a workout, is meant to develop us rather than dismember, to amplify not amputate, to sculp not sever. It’s meant to drill our very mind and body in the new way of life that Jesus unleashed. So when disaster strikes, betrayal pounces, and death robs, our bodies and minds are triggered to care, to give, and to believe. But to what end? In my moment of burning pain, this news sure doesn’t help me feel better.

In fact, God’s call for his people to endure such pain still seems admittedly strange and unfair. The books of James and Hebrews were written as persecution against early Christians began heating up. Why would God sit by and allow his people to undergo the trauma of persecution? Why would God let families suffer imprisonment and torture? Why would God let children be traumatized by the deaths of their parents? The questions are profound while the answers seem elusive. But I think I get a glint of understanding when I take a closer look at Scripture.

I end up seeing a God who was brokenhearted when Adam and Eve hid from him. I see a God who was cheated on by his people on their covenant day. I see a God who was neglected and abandoned over and over again. I also see a God who persevered through an abusive relationship with humanity and still chose love. The biblical story is not one of fairy tale happy endings. Instead it tells the story of humanity living with the ugliness of its choices and a God who chooses to endure in love despite them. Perhaps the reason why God wants to cultivate perseverance in us is so we can love like he did.

A New Picture of Perseverance

But a problem still remains: We are hurting. I am hurting. During this pandemic, I don’t have the strength in me to charge on campus with big smiles and hugs every day. If I’m honest, trying to do that sounds plain crazy. But then again, maybe God isn’t asking that of me. Maybe my image of perseverance needs an adjustment.

The author of Hebrews exhorts

And let us run with perseverance the race marked out for us, fixing our eyes on Jesus, the pioneer and perfecter of faith. For the joy set before him he endured the cross, scorning its shame, and sat down at the right hand of the throne of God. Consider him who endured such opposition from sinners, so that you will not grow weary and lose heart. (Heb 12:1–3)

My first impression of Jesus in this passage is of a Jesus who laughed in the face of danger, who gritted his teeth as he climbed Golgotha, proudly standing, fist on hips, triumphing over the forces of evil. But that isn’t an accurate picture of his perseverance. In the Gospels, we see a Jesus battered and bleeding. A Jesus too weak to carry anything. A Jesus probably concussed from beatings to his head. A Jesus anxious enough to sweat drops of blood. A Jesus crying and calling out for his Father.

Perhaps the reason why the author of Hebrews says to fix our eyes on Jesus is because through him, God offers a different image of perseverance. Perhaps perseverance looks less like a mighty lone Olympian standing with a raised fist and more like broken, huddled widows on their knees praying, Lord, you are still King. Come have your way.

And on our struggling disappointed campuses, I believe this picture of faithfulness is all God’s asking for. And I believe it’s enough.

By Stephan Teng
A Snapshot of Running Large Groups Online

As campus was closing due to COVID, we felt an invitation to step into the unknown and experiment and learn, to be a community committed to each other even when separated.

Reluctant. That’s how I see the prophet Jonah in his eponymous book. I get that reluctance. I wonder if that’s why I resonate with Jonah.

By Nathan Peterson
White-knuckling It through 2020

As this year draws to a close, I realize I’ve too often been white-knuckling my way through it, just trying to hold on, keeping my grip for just a little longer. And that’s just not healthy.