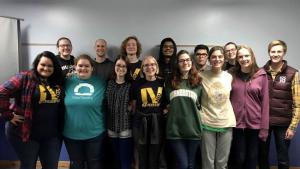 On a Thursday evening, I walked into a room where InterVarsity was gathering on campus. Despite having been raised in a Christian home and growing up with solid biblical foundations, I hadn’t read the Bible in a couple of years. I was distant from God and bitter at his people. Still, I walked into the room.

I transferred to Northern Illinois University (NIU) in the spring semester of my sophomore year, so I’d missed the welcome week of organizations parading their values, events, and promises to build life-long friendships. I needed to make friends, and I knew I wasn’t going to find close friendships just by making small talk in my classes or on my dorm floor. I went back to what was familiar.

After visiting NIU a few months before, my mom and I were at Panera picking out classes and talking about different clubs on campus. She mentioned that I should look into Christian organizations and plan to visit their meetings.

Fueled with the freedom to break away from a faith I wasn’t actively practicing, I asked, “What if I don’t want to join a Christian organization?”

“If you don’t join a Christian organization, we won’t help pay for college,” she said. And that was that. For her, continuing to be a part of a Christian community wasn’t an option, but a given. I was disgruntled, but now I’m grateful for her push to re-encounter Jesus.

Deep down, where I’d stifled the voice of the Holy Spirit, I knew that this gathering, this room full of strangers was going to be the come-to-Jesus moment I needed in my faith walk.

After that initial InterVarsity meeting I attended, I continued going each week. I joined a small group, started going to a local church service with other students, and went to game nights, dinners, and prayer meetings.

Consistently reading the Bible, praying, and being back in a Christian community were what my soul was craving. I wanted to get closer to this group of people who were down-to-earth, unapologetically quirky, and seemed to enjoy hanging out with me.

I didn’t really realize it at the time, but I was lonely in the years leading up to my transfer into NIU. I’d come into high school with some friendships, but I hadn’t maintained them, and I hadn’t formed a relationship with anyone past small talk in classes in the year and a half I was at community college.

It was invigorating to go from small talk to being immersed in a community of people who cared and wanted to know what was going on in my life.

Later that year, my small group leader asked if I wanted to lead a small group Bible study in the fall. Though I felt completely unprepared, I decided to say yes. It just seemed like the right thing to do. If I wanted to continue to form close relationships and to grow in my faith, this was the logical next step.

However, I was still struggling in my faith. I believed the theological statements I affirmed to become a leader, but I wasn’t fully living them out. This left me conflicted.

At the end of the school year, our InterVarsity chapter went on a week-long retreat in the upper peninsula of Michigan.

During this week, we were sent on a Retreat of Silence, where we were to be silent as we simply spent time with God. As someone who feels the need to fill the silence—either literally in a conversation or figuratively in the busy schedule of my life—being still for hours was novel.

In that time, I journaled about things I’d never told anyone before, including God. I’d never been as open and raw with God before because I didn’t think he’d want that.

As I confessed and talked to God, I became overwhelmed with how I should have acted in the past and what needed to change in my life. In the middle of these thoughts, I heard him speak and say, “Be still and know that I am God.”

All of the distance I’d been feeling before I’d transferred to NIU had been bridged by a God who extended grace and wanted me to know him—and who wanted to know me. I realized just how unfathomably much God loved me.

The retreat felt like a clean slate and I left feeling renewed, but God still had work to do in my life.

The fall semester launched me into some more spiritual formation. I met with four other leaders in our chapter for a weekly book club where we discussed Kill the Spider: Getting Rid of What's Really Holding You Back by Carlos Whittaker.

The book challenged us to take a deep dive into the roots of habits and thoughts that were harming our relationships with God. It forced me to wrestle with why I’d chosen to distance myself from God and to talk through some of the things I’d journaled about during the end of the year retreat.

Also that semester, I was discipled by my small group leader where we went through another book on vulnerability. It wasn’t comfortable to reveal the specific ways I’d been struggling in my faith, but it was necessary.

No longer was I working through some nebulous Thing that I didn’t know how to deal with alone. It was one of the hardest and best things I’ve done in my walk with Christ.

The honest conversations I had with these InterVarsity friends freed me from lies I’d been believing about myself and God. I didn’t find any of the judgment or shame I’d been placing on myself for years, but instead kept hearing these words repeated: “I’m not alone.”

I learned that I’m not alone in the humanness of my striving and often failing to follow God. There’s nothing I have done or will ever do that will make me unlovable to an unconditionally loving God.

InterVarsity gave me the opportunity to have heart-to-heart conversations that built friendships I hope will last a lifetime. It transformed my faith into an active, honest, and exuberant relationship with Christ.

Sarah is a social media and editorial intern. She's a Northern Illinois University alumna, and she enjoys linguistics, walking her dog, and the enneagram.

What a beautiful and

What a beautiful and inspiring testimonial!!! Thanks for sharing. I’m very blessed to have read this and knowing your grandmother!!!