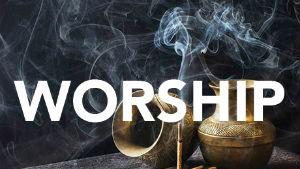 I wonder what Myers-Briggs personality Mary, the mother of Jesus, would have been. Being an INFJ, I can’t imagine she was a J (someone who likes to have a plan, always has a plan, and likes that plan to go according to plan), and here’s why: Luke 1 reveals that, soon after Gabriel announced to her that she would become pregnant through the Holy Spirit and then give birth to the Messiah, one of her first responses was to worship.

I understand that bearing the Son of God was an incredible honor. But let’s be honest: it was a major life—ahem, plan—interrupter. Preparations for her upcoming marriage to Joseph, relationships with her family and neighbors, her place in her town—all of it was about to be turned upside-down.

I am in the middle of a “plan interrupted.” About a year-and-a-half ago, as I was happily going about my life, what I call The Restlessness started—a dissatisfaction I occasionally get with some part of my context, and a desire toward something else. This is unusual for me, as I’m pretty content to stay in the same place for quite a while if I feel like I’m learning and growing. I don’t love change. And the last time I’d felt this way, it resulted in a major transition to a new city. So The Restlessness is a bit unnerving for me when it comes.

After several months of discernment, during which I had no sense of what the Lord might be leading me to, last December I started to get some clarity. And during the first week of January in 2017, I had a moment that did not involve an angel from the Lord, like Mary got, but that felt almost as significant and clear: I knew that what I wanted to do, and what God was calling me to, was to apply to Master of Fine Arts programs in creative writing and then teach writing to under-resourced youth.

So I set about rearranging my life (aka making a plan) for this new goal. But that new plan was interrupted again in a way I didn’t expect. After hearing the Lord so clearly, and experiencing a few months of drawing closer to him in prayer, I was plunged into a season of feeling his silence and (seeming) absence more than his presence and voice. I’m still in that season. Which is to say I’m in a season of trying to match what I know in my head to be true of God (that he’s good, that he’s with us all the time, that he’s sovereign, that he speaks and guides and leads) with what most of this year has felt like: lonely, untethered, unseen.

I wonder if Mary experienced this. I have to believe, in God’s goodness, that she had a strong sense of him throughout her pregnancy. But maybe she didn’t. Maybe she got this strange message from Gabriel and then had very few moments (Elizabeth’s praise upon seeing Mary and Joseph’s dream being the only ones) of feeling seen and known and led by God into this new story that he had set into motion.

In either case—whether she sensed him or not—I am challenged by her immediate worship of God’s goodness at the announcement of news that, while it meant salvation for the world, meant a very complicated nine months ahead for her. Indeed, her first instinct was to remember the great things God had already done and the character she knew to be true of him based on those acts. And that fueled her worship of him for what he was going to do—the things she hadn’t seen yet but fully trusted he would accomplish.

And that is even more challenging to me. In that moment of clarity in January, with a new goal stretching out in front of me, I could certainly praise him for what he had done, and for the ways he had led me previously. But, in a year that has been harder than I ever imagined it would be, it is very hard for me to worship him for what he will do. Because even though I know it will be good—he cannot do anything but good—it might be hard. It might be different than what I think of as “good.” It might be very different from the plan I have in mind.

It is to come face-to-face, for the thousandth time, with my own lack of control over my life, and with the fact that I am absolutely at his mercy.

It’s to hand over fully every aching, fragile hope and dream and take my place (for the millionth time) behind him (not beside or in front of him), where I can only see each step as we take it.

It is to take whatever he gives—interruptions, curveballs, detours, pauses—with joy.

And that’s the challenge of Advent and Christmas. It’s easy to sing carols and praise God for sending Jesus on Christmas Eve and Christmas day, with candles glowing and people you love around you. It is harder (at least for me) to look ahead at a brand new untouched year and praise him for what he will do in that year. To do that, we have to ask if we really believe that he can only, ever, work for the good of those he loves.

Ironically, I have felt that worship is one of the practices that will eventually break me out of this season of fear and loneliness. I believe something happens when we declare his praise audibly, in prayer or in singing. My thoughts can get tangled up inside my head until I lose perspective; the lies about God and the truth about God seem to sit too close together in that space. But when I speak or sing truth about who he is, it has a different authority that helps me consider the truth anew.

In this hard year, admittedly, there have been days I could not sing the words to songs of praise, because though I could see their truth for everyone else, it felt hard to see their truth in my life. In those moments, I let the singing of others (whether those in my church or the musician I’m listening to) boost my faith. In other moments, I have sung words that don’t feel true as a declaration, hoping that the act of singing them is changing my heart toward belief.

Mary seemed to be living in a posture of praise already, before Gabriel visited her—which is likely why praise was her first response to astonishing news. Like her, we can also learn to orient our hearts toward praise. This week, as you celebrate Christmas and then look ahead to 2018, consider adopting a specific practice of worship in anticipation of the new year. Here are a few suggestions:

How can we celebrate Christmas when we struggle with unresolved feelings of hurt and sadness for ourselves, our loved ones, and the world?