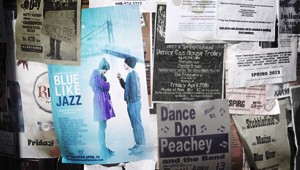 Don Miller’s Blue Like Jazz: Nonreligious Thoughts on Christian Spirituality has been made into a film and is opening in select cities this Friday, April 13, and more on Friday, April 20 (see cities and buy tickets here). The book of loosely connected stories has sold nearly two million copies, obviously touching a nerve.

I talked to Don about the process of making a movie, controversy around the film, and what’s next.

You are nearing your opening. How do you think the project is going?

It’s good. We feel like the movie is getting good feedback. Thousands of people have seen it now. We don’t have a big marketing budget, so we hope these people can share about it through social media. There’s no way to tell how it will do at the box office.

As you’re coming down to the wire, what are your hopes for the movie?

We just hope this movie becomes, you know, a beloved piece of art…entertainment for a lot of people or a whole group of people who live in this middle ground between the church and the world, between faith and doubt, that they find a home in this film.

In a recent blog post, you wrote about “changing culture.”If this film is a fulcrum point for a change in our culture, what would you hope that would be?

The sort of average evangelical has a very dualistic life. They say a lot of right answers but not a lot of true answers. I hope this film paints the middle ground a little bit. There’s this wrestling between faith and doubt. That’s where most of my friends are. They are not people of faith, so I live in that, in a couple different cultures. This film lives in a couple different cultures too. I don’t know if such a film has really been made yet.

I saw the co-writer on the screenplay, Steve Taylor, post about a possible Christian establishment conspiracy  against Blue Like Jazz. Do you think there is one?

I don’t think there’s a Christian conspiracy (against the film). I just think there are people who see Christian faith one way and see anyone who doesn’t see it their way as antagonistic or threatening.

What’s been the best part of making the film?

It’s been a very long process. We’re pretty weary. But you know, it’s the relationships.

We made this movie together, become like brothers, from the guys managing the tour to Steve (Taylor, co-writer and director) to Ben (Pearson) the director of photography to even the actors—Marshall (Allman, lead actor) has hung with us on the road. We had over some of the guys who were in the film last night who were not believers. We just all fell in love with each other.

It’s rare community, an anomaly, to make a piece of art together about their respective faith or lack of faith. I don’t know if that’s ever been done. I’ve never seen it. I’ve seen people from different stages come together, and work on projects. But we’ve really clicked.

For these artists who are not people of faith, did they sense an ownership of the film that “This says something about my experience too”?

Two of our actors, Tania Raymonde who we picked up from Lost and Justin Welborn, neither of them people of faith. They both felt like this was a beautiful statement about who they are. We came together and made a movie. And of course the protagonist is a Christian. It doesn’t have a “we’re right, they’re wrong” bent. It’s a guy overcoming his shame of who he is, of being able to be known. I think they really loved that and resonate with that.

The only character in the film who is afraid to be himself is Don. Everybody else is pretty much out with who they are. People from communities who are sort of ostracized in culture and society might really identify with this film because it’s really about a guy who is just trying to figure out who he is but he’s also repressing a lot of who he is because he’s ashamed of it. I think it’s a common story.

You mention being weary. Do you have a sense that this six-year process has been worth it?

I think it might be like having children in how hard it is. But when you have a kid who’s two or three, you forget about how hard it was raising a kid. And I wouldn’t be surprised if we got caught up with that in the filmmaking process. We’re already daydreaming about our next screenplay, and we hope we’ll be blessed enough to make it…The statistics are not with us. To make another one is to just sort of to go back out there and start shooting from behind the arc, trying to make threes. It’s always a good challenge. I think our chances of getting the next film made are better if we have a success (with this one).

You were quoted in a Washington Post article as saying, “The average Christian wants clean answers, clean characters — ‘I was bad then Jesus happened to me, now I became good.’ Not, ‘I grew up in church and I saw a lot of hypocrisy and I walked away and I realized God exists outside of church.” Is there still value in church?

Well sure, yeah. But isn’t (what I said) an obvious statement? Would anyone who goes to church think that God doesn’t exist outside the church? Wouldn’t you say that they are crazy? Isn’t that an extremely arrogant assumption to say that the only place you’re going to find God is at church? That would be really offensive to me if somebody said that.

But I do think that there’s this element in church culture that we want to own God and control him, and they want to charge for him, that you can only get him at this store. I just absolutely don’t believe that’s true at all.

I have a friend who was excited when he heard I was going to interview you. He wrote:

“I am not sure what my relationship with God is, or will become. I want that to happen, but I am bogged down by religion. I think Miller’s writing helps dissect some of that disconnect, but I would like to know if he has any thoughts about where that journey of discovery can start. I find it intimidating. How can this journey be done in a way that is not overly convoluted by “being told the right way” and discovering for oneself?

I would just say, the thing is—it’s still hard, man—but just to go directly to the source. Just go to God and talk to God and pray to God and trust that he can guide you. To me that’s the first step and that begins with prayer. And God somehow takes care of us.

Adam Jeske has served in Nicaragua, China, and South Africa and regularly contributes to Relevant. With his wife and co-author, Christine Jeske, he has written This Ordinary Adventure: Settling Down Without Settling (IVP, September, 2012). He blogs, tweets, and serves as the Associate Director of Communications for InterVarsity.

Thanks for the interesting

Thanks for the interesting interview, Adam.

Your posts are very much

Your posts are very much appreciated. I want to come back for more info so I'd like to bookmark your page for the updates. Keep up thegood posts! best mt4 broker