Through My Lens—Being Christian, Being Hmong | InterVarsity
Skip to main content

Through My Lens—Being Christian, Being Hmong 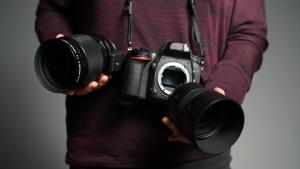 What should I be doing? Do I do that too? What are they expecting of me? Is this the norm? How is that so? And why? These questions explode in my mind whenever I enter any space. It’s a mixture of making real-time observations and adjusting my actions and behaviors accordingly.

The reality of my story is that I had to learn how to code-switch and contextualize at a young age. Most of it is intuitive, to be honest, and I didn’t realize I did this until I became a college student.

I’m biracial—White and Hmong American. I moved from the inner city to a small farm in a small town in Wisconsin. I carry identities and experiences that feel very polarized at times. And what I’ve learned is that one size never fits all. I’ve had to figure out how to make sense of all these things to survive.

I came to follow Jesus as a high school student through the Hmong refugee church that my grandfather pastored. It was a huge catalyst for me as I learned about God and, for the first time, felt like I belonged somewhere. At times, being the only “halfie” or “White-passing” person, as people called me, did make it difficult for me to feel secure in that community, even though culturally I related to them the most.

When I went to college at the University of Wisconsin–Madison (UW), I got plugged into the Asian American InterVarsity chapter (AAIV) on my campus, which I now lead as a staff minister. As a student, it was one of the first times I began to have spiritual conversations with others who weren’t Hmong.

It was then that I realized that I never felt like I was “enough.” I never felt Hmong enough, Asian enough, or even White enough. I didn’t have enough of the same opportunities as my peers, enough resources as many appeared to have in college, or enough relational security. I had an identity, community, and faith crisis.

Our Communal and Shared Culture

You may be wondering, “Who are the Hmong people?” We are Asian American, but our narrative is one of an Asian minority group seeking refuge, displaced from our own land and longing for a sense of home and belonging. We don’t have a country to call our own, and our land of origin is known to us only through the stories passed on from generations. We are a people uprooted from one land and put into another. Together, we are disconnected from our ethnic identity because of multiple spatial displacements. We wrestle with the question of “Who am I as a Hmong or Hmong American?” Like me, many Hmong Americans often don’t feel Hmong enough or American enough.

Hmong culture is communal, and everything is shared. We are who we are through relationships and shared identity. So, when the good news first came to the Hmong people in Southeast Asia, whole households and family units converted. Faith and family were integrated, and following Jesus was a communal decision and experience. But what happens when one chooses differently than our families or community? And what happens when following Jesus is not a shared value?

When Hmong people first converted, we were required to opt out of the traditions and rituals rooted in animism that our previous generations had practiced. By not participating in these activities, Hmong Christians are often seen as not Hmong enough (or not even Hmong at all). Following Jesus can mean having to separate or cut ties from our families, clans, and communities. Plus, we can experience a loss of identity and purpose.

For this reason, following Jesus is a riskier decision for Hmong Americans. I see this in the stories of many of my Hmong students in the UW AAIV chapter and also in those shared at our regional Hmong Christian Collegiate Conference (HC3).

Telling Hmong and those from collective cultures in general to follow Jesus instead of honoring family and to separate themselves from their culture doesn’t sound like good news. So how do we minister to those who are experiencing this? Though someone may still experience an aspect of separation, how do we disciple them in a way that is culturally honoring? It’s important for Western Christianity to make space to disciple Hmong Americans well—as a displaced people at risk of losing parts of our tradition and culture—to see how community, family, and our ethnic identity matter to Jesus and that he wants to restore them.

Healing the Loss of Our Cultural Identity

Recently, after giving a talk at a Hmong conference full of Hmong ministry leaders, I realized that we Hmong often don’t know how to create this unique space ourselves. In a room full of Hmong American leaders from across the country, everything we did felt like a conference influenced only by Western Christian values. I thought, Where is the storytelling aspect we value in our culture through words, poems, and embroidery? Isn’t our faith more than just an intellectual expression? How do we allow ourselves to embody our faith and even redeem it through our cultural expression?

As Hmong Christians, the harsh reality is that our understanding has been influenced by a dominant way of thinking and practice. Colonial influence distorted and ripped us of our original cultural identity, which God made beautiful. Through contextualization, we can restore the beauty and value of our shared experiences and culture and reorient ourselves to see how our cultural identity relates to our faith in Jesus. Contextualization is more than being able to identify areas that aren’t working well; it’s reengineering structures and systems to cultivate a space and message that are relevant to the people in the room.

Let us not miss out in the ministry of reconciliation, to heal the brokenness of lost cultural identity among people groups (majority and minority cultures). As followers of Jesus and ministers of the gospel, let us honor and make space for all peoples, nations, tribes, and tongues! My hope is that we would all find belonging and restoration through this ministry of reconciliation.

Ashley is an InterVarsity Campus Staff Minister and leads the Asian American InterVarsity (AAIV) chapter at the University of Wisconsin–Madison. You can support her ministry at donate.intervarsity.org/donate#21287.

I often think about the gospel and how it was presented to me. It was in the country roads of southern Arkansas, where my grandmother sang in the choir of a Black church. It was the hands raised, the strength of the Black women, and the rapping of the pastor that excited my soul. It always struck me that pain, joy, and hope could coexist.

All this begs the question: how do we allow the good news about Jesus to take on the beauty and diversity of other cultures without infusing beliefs that are contrary to the gospel?

My everyday life carries the thumbprints of the generational traumas, sins, and blessings of our collective stories. The lessons I’ve learned from the matriarchs of my family and our immigration stories shape how I engage with Scripture and the gospel. And as a multicultural, multiethnic, and multiracial woman, I know that stepping into Oklahoma means bringing my family’s stories and lives with me.

As I reflect on what contextualization means in today’s world, I believe it is more about who you are rather than the specific things you do.