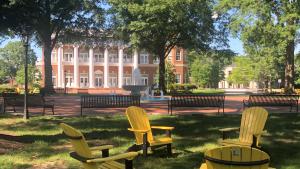 The sun beat down without a cloud in the sky. Jesus glanced around the group gathered on the dusty road, looking tired, hungry, and ready for a rest. “Who do people say I am?”

Some of the disciples exchanged looks but didn’t answer. Others spoke up, “Some say John the Baptist; others say Elijah; and still others, one of the prophets.”

Jesus stopped in the middle of the path, “But what about you? Who do you say I am?”

With no hesitation, Peter answered, almost fiercely, “You are the Messiah.”

InterVarsity’s small groups at Randolph-Macon College in Virginia have been studying the Gospel of Mark all year—continuing on virtually since COVID-19 broke out. Knowing that this question in Mark 8, “Who do you say I am,” was coming up, campus minister Kristen Cooke pitched the idea of giving a call to faith.

Some of her small group student leaders were hesitant—giving a call to faith is always a little nerve-wracking, and that it’d be done virtually only amplified their nervousness. But Kristen encouraged them, “In the face of all [that’s happening], Jesus’ question is still for us. . . . There are people in our community right now just waiting to be asked if they want to follow Jesus with their whole lives. They’re ready to say yes.”

The students took Kristen’s words to heart. The coleaders of one online small group, Josh and Victor, walked through Mark 8, gave the call to faith to the other students in the group, and waited. “I was worried that no one would respond, and we would just kind of sit there in awkward silence,” Josh said.

But then not just one but four students said yes to Jesus—either making a first-time adult decision or recommitting their lives to Christ.

Victor shared later with Kristen that he hadn’t really expected anyone to respond. “We were comfortable with presenting the gospel and [felt] equipped to invite our men well, but we were blown away by the way God caused our small group members to respond,” he said. “I was, and still am, in awe of what transpired that day.”

Another small group leader, David, also asked if anyone was ready to recommit their lives to Jesus. Having seen how one student had been growing dramatically, David expected at least one person to raise a hand. But so did another three students.

Each of them took time to share the reason behind their decision. “It was beautiful to listen as one shared this fear that he has had about not getting into heaven one day and feeling like he has to repeatedly ask the Holy Spirit into his heart,” David said. “He and I were able to have an amazing conversation later about redemption and sanctification and what the Holy Spirit means for each of us as born-again believers. . . . My guys were ready to make some decisions for the Lord. I’m thankful I was encouraged to take the time to ask them about it.”

Reflecting on how God worked through these calls to faith, Kristen said, “I’ve seen student leaders long for the kingdom during the coronavirus [pandemic] more than ever before. They long to be together. They long to be closer to the Lord. They long for more students to have the hope that we have. Isn’t it strange that, perhaps, the best time to ask students if they want to enter the kingdom is when it feels far away? I’ve yet to see a better moment to invite leaders to take risks in mission or to invite people to respond to the gospel than right now.”

On that dusty road near Caesarea Philippi, Peter went from curious seeker to committed follower. And more recently, across computer screens and time zones, eight students made that same decision, taking a definitive step in following Jesus Christ.

How InterVarsity is Responding to COVID-19

In the midst of chaos, we trust in the Lord's peace and continue to do ministry, though it may look different.

On March 27, InterVarsity launched it's first national large group in response to the COVID-19 crisis.