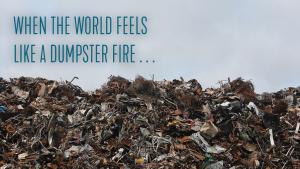 One glad morning, when this life is over,

To a home on God’s celestial shore,

COVID, a lack of in-person relationships, the ongoing realities of racism, patriarchy, income disparity, and climate change — the world can feel like a dumpster fire. Scary to watch from a distance but devastating when you’re standing in the middle of it.

Much of what Protestant Christians believe about heaven, about life after death, is centered on leaving this “dumpster fire” to go to someplace better. “They’re in a better place,” we often say about those who have passed away.

The song lyrics above, taken from “I’ll Fly Away” (performed beautifully by Alison Krauss and Gillian Welch in “Oh, Brother Where Art Thou?”), reflect the heart cry of those looking to Jesus in times of trouble. Crying out for deliverance is natural, even biblical. But it is the location of our life after death that I want to challenge here.

What we believe about life after death dictates how we think about life before death. If this planet is simply an ark, carrying God’s people to some future, glorious paradise elsewhere, then there is little motivation to work for the betterment of our planet or the flourishing of physical bodies living on it now.

For college and university students, especially, what does it mean to look forward, beyond graduation, to making a difference here on this earth? Or is that even possible?

I saw the Holy City, the new Jerusalem, coming down out of heaven from God, prepared as a bride beautifully dressed for her husband. And I heard a loud voice from the throne saying, “Look! God’s dwelling place is now among the people, and he will dwell with them.” (Rev 21:2-3)

Based on passages in Scripture like this, we begin to see that we don’t “fly away” to God. God “flies away” to us.

Revelation 21 describes the “glory and honor of the nations” (v. 26) being brought into the new Jerusalem. What a curious image. All the amazing and glorious things created by the nations of the earth are brought into a new eternal existence, where God dwells with us. I certainly hope Pad Thai is included. It’s hard to imagine eternity without good Thai cuisine! Humanity’s glorious and honorable creations show up in heaven.

Rather than rescuing people from [earth] in order to reach [heaven], the creator God would finally bring heaven and earth together in a great act of new creation, completing the original creative purpose by healing the entire cosmos of its ancient ills. They believed that God would then raise his people from the dead, to share in — and, indeed, to share his stewardship over — this rescued and renewed creation.

What if one of the glories of the nations which survives into eternity was something you contributed to? What if the things you do here and now are a type of partnership with the Creator in bringing tangible goodness to the earth?

Working with God in the Garden of the World

I remember my mentor, Bill, telling me about his time as a young father. His six-year-old daughter, Janie, asked one spring if she could help him with the garden. Bill loved his garden, and he knew that Janie would likely plant crooked garden rows. Some seeds she’d plant too deep and others not deep enough. It wouldn’t be a very pretty garden and maybe not even productive. But Bill, with tears in his eyes, told me, “Oh, what a wonderful time Janie and I had planting the garden that year.”

That story has become a parable to me. God is overcome with joy at working with us in the garden of this world. Not because we can do such a fine job of it, but because the intimacy of working together is what God longs for.

Whatever you may believe about the end of all things, God actually lived with human beings at the beginning of all things. It was there that God issued a mandate for flourishing. The man and woman were the only forms of creation who existed in the likeness of their Creator, and so God called them to fill the earth, subdue it , and rule over everything (Gen 1:28).

The Hebrew word for fill, “mala,” is translated elsewhere fulfill or satisfy. The word subdue, “kibosh,” implies seizing what is out of control in order to bring it under an authority. Finally, rule over, “rada,” is used in Scripture to describe governance. The original Great Commission was for human beings to act as agents of the Creator: God’s image-bearing co-regents, who were to be fruitful, to bring those things that were out of alignment with God back into right relationship, and to govern creation as those who were most like the Creator.

Unfortunately, as we continue reading on in Genesis, we see that this doesn’t last. Rather than being God’s stewards, humans attempted to usurp God’s place and become the owners. But from the beginning, God designed us to be managers, cocreators, and stewards.

On Bringing Heaven to Earth

When you search the NIV Bible for “good news of” (in quotes), the phrase that most often follows is “the kingdom.” The good news is about a kingdom — a dominion, a realm, a State — where those who are marginalized in the current empire are centered in a new one. Those aligned with this King and his kingdom have become the answers to their own prayers: “Let your kingdom come, your will be done, on earth as it is in heaven” (Mt 6:10).

How might the field of study you are devoting yourself to bring something of the goodness of God to earth? Bringing clean water to those without matters to God. Launching businesses that push wealth to those on the margins matters to God. And restoring places on this planet that have been devastated matters to God.

The Creator invites us to work alongside him. Restoring people to God, confronting evil, healing the planet, and contributing to the ultimate destination of the cosmos: making all things new again.

Scott is the Director of Global Engagement and Justice for InterVarsity as well as a prolific author, editor, and blogger at overturningtables.com.

By Scott Bessenecker
Does God Care about Where I Work This Summer?

Should pay be the only factor in the summer job you choose? What’s God’s perspective? Is there anything in the Bible that can guide what kind of job we pursue?

By Chandra Crane
Wonder—Flexible But Committed Sabbath Rhythms for Students

When the Lord calls something “holy,” he’s saying it’s set aside, unique, not to be taken for granted. So a Sabbath can be defined as an intentional choice to stop working and focus on what’s holy.

Over 40,000 students on eight campuses with only one known campus ministry in the most post-Christian city in the US. That was the situation InterVarsity Associate Area Director Jessica Pafumi found herself in when she felt God calling her to plant campus ministries in her hometown of Springfield-Holyoke, Massachusetts, in 2019.

But through all my experiences of leading communities—of students, fellow church congregants, coworkers, and more—I’ve seen how transformative and essential good community can be.