The Adventure Begins—Planting an Entire Area of Ministry 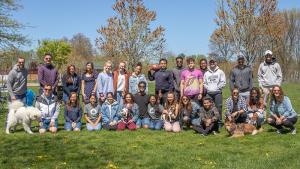 Over 40,000 students on eight campuses with only one known campus ministry in the most post-Christian city in the US. That was the situation InterVarsity Associate Area Director Jessica Pafumi found herself in when she felt God calling her to plant campus ministries in her hometown of Springfield-Holyoke, Massachusetts, in 2019. Some might have seen this as a challenge. But Jessica saw it as an adventure.

“With planting, it’s very scrappy,” she said. “You don’t know what’s going to happen. You’re really just following the lead of the Holy Spirit. . . . I love the adventure of it. But I also like how much it truly makes me dependent on God.”

In the whole city, there were only two students who had any connection to InterVarsity; they had been mentored by a former InterVarsity campus minister. Jessica started working with them, longing to one day see student leaders planting ministries on all eight campuses in the area.

Through church connections and networking, she began meeting more students from the different schools and gathering them for weekly core meetings, focusing on spiritual formation, discipleship, and equipping them to be sent back to their schools two-by-two to share their faith, just like in Luke 10.

Jessica spent her first year of ministry focusing on building trust with students and helping them step into leadership. Initially, they were nervous and worried about doing things like leading Bible studies and small groups. But through Jessica’s modeling and encouragement, they began taking a more active role.

The next school year, Elias Ghantous, who had just been hired as an InterVarsity intern, joined Jessica in helping to reach more campuses in the area. And even when the pandemic struck in the spring of 2020, God continued blessing InterVarsity’s ministry in the area with a steady momentum as they shifted to meeting online. More and more students began attending these small groups. And they so deeply impacted one student that he started his own small group for the campus he transferred to the next semester.

The more Jessica and Elias got to know and disciple students, the more they began to notice untapped leadership potential. Alexza was one of the students Jessica began meeting with one-on-one. She continued growing in boldness in sharing her faith, and by the end of last school year, 10 students were in InterVarsity because of Alexza’s invitations.

Elias and Jessica also met Guen, now a senior at Bay Path University, who had been leading a Bible study on her own for several years. “We were kind of lost,” Guen reflected on the Bible study. “We were trying our best.”

By the time Guen came across InterVarsity, she was close to burnout and didn’t have much time for her own personal discipleship. Jessica was able to provide more resources, mentor Guen in her own walk with Jesus, and get her connected with InterVarsity’s deeply supportive community.

In the meantime, Elias has been reaching out to another corner of campuses in the area. Hoping to gather more male student leaders into the chapter, he’s using his passion for basketball to start hosting a monthly basketball outreach. Even students who’ve never played before are participating and getting plugged into a much deeper community.

As Jessica and Elias continue the third year of planting, God has dramatically grown their ministry. From last year, the number of core students involved has more than doubled. They have four in-person small groups and one virtual group. InterVarsity chapters have been established as official organizations on two campuses, and they are working on being recognized on two more. They now also have a team of five dedicated volunteers, helping to mentor student leaders and serve the needs of the ministry.

Elias and Jessica are now mentoring students from all eight of the campuses across the city, helping them reach out to their friends and classmates and grow in their walk with Jesus. Jessica and Elias’s dream for the Springfield-Holyoke area is coming true.

“If [InterVarsity wasn’t here], I don’t think there would be anything on most of these campuses,” Jessica said, celebrating what God has done in the past three years. “There’s always been this remnant type community of maybe two or three Christians, who just want to see something happen. But they don’t necessarily have the resources or the tools . . . to get something really started. When a ministry like InterVarsity can come alongside them, and . . . just support what God’s already doing, . . . I think we’re a real gift to those students.”

As Jessica prepares for an upcoming sabbatical in January, Elias is currently hard at work to reach full funding. By supporting his ministry, you can help him continue equipping students and help InterVarsity ministries expand to even more corners of the eight campuses in this largely unreached area of the country.

But if you’re someone who wants to see the difference God can make in you and the world, coming on staff with InterVarsity is a great place to start.

Anxiety is a monster, an intense, often debilitating monster. It can cripple us with fear and keep us from living our lives. If there ever was a time to call out the monster, it’s now.

By Kelly Aalseth
Can God Help with Homework? Asking for Wisdom in Daily Life

God loves to talk with us! And the more we become familiar with conversing with him about the small things in life, the less scary it is to listen to him for the bigger things.

By Chandra Crane
Wonder—Flexible But Committed Sabbath Rhythms for Students

When the Lord calls something “holy,” he’s saying it’s set aside, unique, not to be taken for granted. So a Sabbath can be defined as an intentional choice to stop working and focus on what’s holy.