Wonder—Reshaping Our Expectations about Prayer | InterVarsity
Skip to main content

Wonder—Reshaping Our Expectations about Prayer 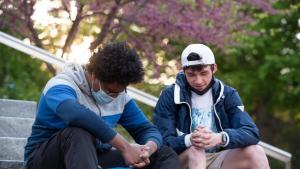 As I’ve met with new students this semester, some say that praying feels hollow. I understand. Sometimes it just feels like there’s silence in heaven. Other times, in the middle of harsh experiences—a dying loved one, a broken family, a plea for deliverance—we can feel as if God ghosted us. As if God ghosted the world.

When I ask what next step students could take, they answer, “I’ll pray more.” It makes me wonder about our expectations around prayer. Don’t get me wrong, the move to pray is not a bad thing. But our expectations of what we think should happen after we do those things can lead us feeling more disoriented and hurt when they aren’t met. Ultimately, prayer is about more than just feeling good and having God solve our problems. As we rediscover the wonder and true nature of prayer, may it deepen our walk with Jesus!

Prayer is not about just feeling better. Prayer is about being in God’s presence.

Many times, students say that when they feel down, they want to pray more. While prayer can lead to emotional restoration, it’s so much more than that. It’s coming into God’s presence.

In this blog post, Jason Gaboury writes, “Imagine being parented by . . . Google Home or Alexa. If you scraped your knee, the device could tell you to wash the cut and use antibiotic ointment. . . . But it couldn’t pick you up, place you on its knee, and hold you.”

Prayer is an avenue of deep encounter with the living, caring God, where we find the answer to our concerns not in what he can give us but in who he is. Psalm 145:18 reminds, “The LORD is near to all who call on him.”

Next time you pray, instead of jumping straight to requests, start a timer for five minutes to acknowledge his love for you. You don’t need to perform or say anything to impress him. Simply be still in his presence and let him love you. (Breath prayer can help you stay focused.)

Prayer is not passive. Prayer is a bold action.

“We can’t pray. We have to go out and do something,” one student told me. While prayer can admittedly be used as an excuse not to act and advocate for biblical change, choosing not to pray disarms us of the most powerful tool to address injustice.

When the leaders serving King Darius plotted against the prophet Daniel, they successfully outlawed prayer to anyone but the king. Daniel, as a high-standing leader himself, didn’t march into the king’s court to expose his enemies. Instead, he prayed (Dan 6:10).

Daniel certainly acknowledged the plot of his enemies, but that didn’t shake or destabilize him. His prayer was an act of resistance against those wishing to crush him. It gave him access to the King of the cosmos, the one with true authority. Even facing sheer death, his resistance wasn’t deterred.

In our nation, a generation is rising to denounce abuse and oppression. But without prayerful submission to God, it’s a slow-fading flame, fueled only by fleeting trends and outrage. It’s our connection to God through prayer that fuels, not hampers, advocacy. Where do you long for God to move? How is prayer fueling your longing to join God’s mission?

Prayer is not only self-expression. Prayer is formation.

This is important when we realize that prayers don’t just reveal what matters to us but also can shape what we care about. The reason why Daniel doesn’t pray against those scheming against him isn’t because he’s avoiding the issue. Rather he’s allowing his prayer to open his eyes to see God’s favor, generosity, and enormity. He’s being formed into someone who can face the plots against him. When we only pray for exams and homework, who are we being formed into? Perhaps it’s more results-driven, academically-successful students rather than faith-fueled, joyful-compassionate ones.

In Luke 10:2–3, Jesus told his disciples, “Ask the Lord of the harvest, therefore, to send out workers into his harvest. Go! I am sending you.” Why would Jesus tell his disciples to ask God for missionary “workers” only to immediately make them the answer to their prayer? I think he was teaching them to pray for the mission, so their hearts would start longing for that. And their longing would form them to be the very ones ready to answer that call. What have you been praying for? How are those prayers shaping you? Consider finding liturgies that can expand how you pray for yourself and others.

Prayer is not simply telling God your desire. Prayer is listening to his.

But it’s not enough to just expand our prayer requests to God. A small group’s student leader was recently asked: “Why should I pray to an omniscient God, if he already knows my needs?” Note the assumption behind the question, that prayer is solely for our requests. While Paul says we should petition God, this question reveals that we often can think of prayer like we’re making a wish to a powerful genie, who’s bound to do what we ask. And so when God doesn’t act this way in his divine wisdom, we’re sometimes disappointed.

This demonstrates that prayer is more than just asking things of God. It provides space for thanksgiving and lament. It allows us to learn the desires of God. Jesus said that the Spirit “will teach you all things and will remind you of everything I have said to you” (Jn 14:26). (You can find resources about listening prayer here.) The next time you pray, ask, “Jesus, what would you like me to pray for? What’s on your mind?” and then pray about it.

Prayer is not powerful on its own. The God we pray to is powerful.

Prayer is not a spell, a wish, or a force to manipulate. Prayer has power to change us and the world because the God we pray to is capable and willing to do that. Prayer lifts our eyes to allow us to commune with him who is above all and with all.

As Moses was transformed by the presence of God, so, too, we are transformed as we pray. As Daniel found confidence and strength to resist schemes and powers by going to God, so do we. As Peter and John received courage and power by the Spirit, so can we.

We pray to the God who has done all these things and promised us access to him. We pray to the one who has stepped down from his heavenly throne, bore every pain and heartbreak, emotional stress and social aggression, and still says, “I am with you always, to the very end of the age” (Mt 28:20). So let us face the silence. Let us face the disappointment. Let us face loss. For we face them with greater power, deeper love, and more comfort than we can ever fully grasp.

By Stephan Teng
Behold & Wonder: The Calling of a Christian Artist

You may feel like you’ve been given two choices: become a person who only creates “Christian art” or someone who yields to the world’s pressures to create “secular” art as a Christian. What’s a Christian to do?

Whether in worship leading, in discipleship, or as chapter president, Elisha was willing to invest his skills to further ministry on campus.